Apparently, it is the first time that an Oromo assumed the highest position in the coalition, which has been dominated, in either officially holding the powerful positions or operating behind the scenes, by the Tigray People’s Liberation Front (TPLF).

The outgoing Prime Minister, Hailemariam Desalegn, who announced his resignation on February 15, 2018, was also the chairman of the EPRDF. He assumed both positions after the death of the coalition’s strongman, Meles Zenawi, who led EPRDF and ruled the country with an iron fist until his last gasp on one fateful day in August 2012 in a hospital bed in Brussels, Belgium.

The chairman of the EPRDF, if we go by the tradition and bylaws of the Front, would automatically become the Prime Minister. The head of the office of the EPRDF, Shiferaw Shigute, who came second in the election of the chairmanship yesterday, said that Dr. Ahmed would be presented as a sole nominee for the premiership to the country’s parliament. The House of People’s Representatives, with its 100% of seats held by the ruling EPRDF, usually meets on Tuesday’s and Thursday’s. Parliament’s schedules are mostly secret but Abiy might be anointed the Prime Minister tomorrow.

Abiy Ahmed (Ph.D.), is a man credited for his progressive ideas and equally admired for his oratorical skills. He is extremely good at capturing his audience’s attention in his otherwise motivational speeches, preaching that Ethiopians are better off standing together than divided along ethnic and religious lines. On the other hand, he is an insider in the repressive regime. He is a one-time surveillance and intelligence expert with the spy agency, a former lieutenant colonel in the army and a former minister of science and technology. 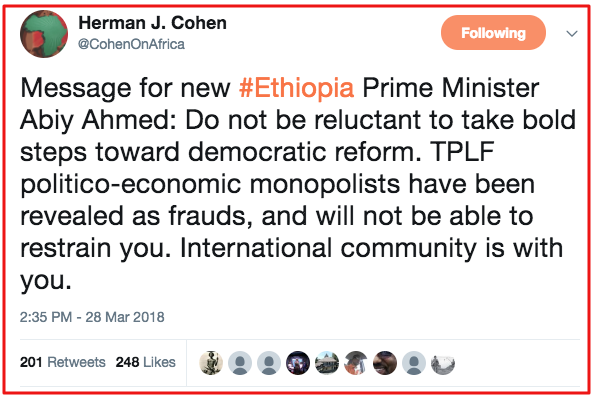 He hails from the Oromo region, a region beset by three years of deadly apprising with the people demanding to have a fair share of the country’s resources and political power, both spheres still monopolized by the TPLF oligarchs.

While some, including western allies of the regime, believe the election of an Oromo would quell the fuming anger in the country’s Oromo region and bring a semblance of reform within the EPRDF, others caution against expecting change from a regime’s insider, while still others believe things remain more of the same.

“Ethiopian regime should withdraw SOE [state of emergency] declaration prior to naming OPDO leader Abiy Ahmed as new Prime Minister, thereby avoiding a tense vote in Parliament, and setting the stage for political reforms,” tweeted Herman Cohen, former U.S. Assistant Secretary for Africa on March 1, 2018. A tweet that hinted that Abiy Ahmed was the favorite of Washington, a strong ally of the regime in Addis.

Cohen came back on his twitter yesterday and advised reconciliation and inclusive political process before time runs out while warning the TPLF, whom he called “power monopolists” of the dangers of maintaining the status quo. 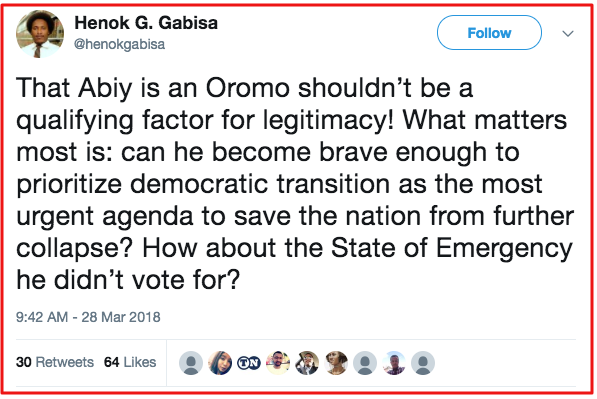 Whether the soon to be anointed Prime Minister defuse the sizzling crisis in the Oromo region and lead the EPRDF and the country as a whole towards reform, reconciliation and transition remains to be seen.

But the fact remains, the TPLF still maintains control over the army, security, and the economy, leading some critics to believe that it would be an uphill battle for a non Tigrayan holding the position of the Prime Minister.

Meanwhile, it should be remembered that hundreds were killed by the TPLF Agazi soldiers and tens of thousands detained and still over one million people have been displaced in the last three years of protest that simply demands the end to misrule by a Tigrayan elite and the formation of a government, elected by the people, and that serves the interests of the people.

Not a single TPLF soldier or an official has been brought to justice for the death and misery inflicted against peaceful protesters.

On the contrary, mass arrest and extrajudicial killings still continue to this day.