The BBC: Guardian or Suppressor of Truth

As a child growing up in the Horn of Africa, I always used to wonder why my mother had a deep mistrust of the BBC. She would label any gossip monger or liar as ‘BBC’. What made my mother’s insight into the BBC more remarkable was that at the time nearly everybody would have their ears pinned to the crackling shortwave BBC news broadcasts and took their word as the Gospel truth.

Having now had the misfortune of dealing with the BBC, I fully understand the sentiments of my late mother.

Over the years the BBC had managed to cultivate an image that portrayed it as an organization governed only by the truth. An organization built on the British sense of ‘justice and fairness’.

With the advent of the Internet, organizations like the BBC have lost their controlling grip on the media. People are now able to get their news from different sources and don’t rely on these antiquated organizations. The advent of social media has further undermined the monopoly that the BBC had.

If one scratches the surface of the BBC, it quickly becomes evident that under the sheepskin there is the fur of a wolf.

No doubt as we all know the BBC over the past few years has been relentlessly targeting Eritrea with its propaganda. I had tried to challenge it on many occasions but as the BBC is part of the British establishment it is well protected.

For example, OFCOM (the broadcasting regulator) has no jurisdiction over the BBC World Service, which is essentially the British government’s propaganda machine. The World Service (formerly the Empire Service) is only overseen by the BBC itself, which essentially makes it the only unregulated broadcaster in the United Kingdom.

>> ALSO READ : Can We Still Trust the BBC Indeed?

Ironically, OFCOM is able to deny Iran’s Press TV a broadcasting license, but has absolutely no say over what the World Service does, despite being entrusted with regulating the BBC.

Although the BBC can use the Freedom of Information Act (FOI) to get information from other companies, the act does not apply to it because it is a broadcaster. If the BBC feels that whatever is being requested of it through the FOI is remotely linked to its activities as a broadcaster, then it can legally refuse to divulge that information. This essentially legalizes the BBC’s shroud of secrecy it normally cloaks itself with.

A browse through the BBC’s content would reveal that the organization usually portrays African countries like Eritrea as secretive and ones that by-pass the law to suppress their opponents.

I recently submitted a Subject Access Request (SAR) to the BBC, and on the second time of asking the BBC reluctantly revealed an email that should be of concern to anyone that supports the BBC.

It is to be noted that the BBC on instructions from the British Government started to broadcast to Eritrea and Ethiopia in the Tigrynia language in September of 2017. It quickly became apparent that the purpose of these broadcasts was not to inform the people of Eritrea but to undermine Eritrea and give protection to the TPLF, which was facing a popular uprising at the time.

As a result, I set out to challenge the BBC on its approach and tried to hold it to account. A turning point was when the BBC Tigrynia service failed to report the arrest of Mohammed Al Amoudi by the Saudi government.

The arrest should have been headline news as the man happened to be one of the richest people in the World, the richest resident of Ethiopia (in fact thanks to the TPLF was considered to be the owner of Ethiopia) and the most powerful private backer of the TPLF.

As a result, I wrote the following letter to the BBC Director General to bring the matter to his attention.

Although I have recently written to you on two separate occasions to express my concerns about the new BBC Services, as a concerned British Citizen and BBC Licence fee payer, I unfortunately find myself writing to you again to express my concerns, before you have had an opportunity to address my previous ones.

As you might be aware, on Saturday 4 November 2017, the government of the Kingdom of Saudi Arabia arrested several prominent people. Amongst those arrested is the Ethiopian born Sheikh Mohammed Al Amoudi.

Sheikh Mohammed Al Amoudi is deemed to be one of the richest men in the World. He is certainly the biggest private investor in Ethiopia and the largest private employer in Ethiopia. He has dominated Ethiopia like no other man for the past twenty-six years and is deemed to be one of the most powerful people in Ethiopia. So powerful and influential was he that he has had a free reign in the country and no door has been closed to him.

He is the richest backer of the Ethiopian government and is quite often seen mingling with Ethiopia’s political elite.

With Sheikh Al Amoudi being such a prominent figure in Ethiopia, one would think that his arrest by the Saudi government would be a significant event and a worthy news item by anyone’s standard.

Owing to the fact that the Sheikh is the largest private employer and owner of major industries like gold mines etc. in Ethiopia, his arrest and subsequent freezing of his assets, has huge implications to tens of thousands of Ethiopians and the country as a whole, not to mention the very future of the Ethiopian government.

Despite the deeply concerning ramifications of the arrest of Ethiopia’s benefactor, it came as no surprise when the Ethiopian government having mentioned the Saudi government anti-Corruption crack down, remained tight lipped about the arrest of their biggest patron.

What was not expected and extremely concerning is the fact that neither BBC Tigrinya nor BBC Amharic (I cannot comment on BBC Oromo) mentioned the arrest of Sheikh Al Amoudi, seemingly taking their cue from the Ethiopian government. I can only imagine the despair of those Ethiopians who had turned to the BBC seeking information when they were met with a wall of silence.

Although the BBC did not even spare Her Majesty or the Prince of Wales when it reported about the recent ‘Paradise Papers’ incident, it would appear that it chose to not embarrass the Ethiopian Government by not reporting about the arrest of their biggest financial backer.

To me, the silence of BBC Tigrinya on such an important matter to Ethiopians is proof that the service is heavily influenced by the Ethiopian government, to the detriment of the BBC’s reputation. As such, I feel that the objectivity and impartiality of the BBC has been severely compromised.

To put matters in some perspective, the UK equivalent of the decision of BBC Tigrinya and BBC Amharic not to report the arrest of Sheikh Al Amoudi would be for the BBC to ignore the arrest of Sir Richard Branson or Mr Rupert Murdoch on corruption charges.

If the new BBC services cannot report on matters that might be a source of embarrassment and unease for the Ethiopian government, what exactly is their purpose? When they were launched they were lauded as a source of information for the people of the Horn but sadly this has not been the case.

Whereas the Voice of America services to the Horn have reported on the arrest of Sheikh Al Amoudi on a daily basis, the BBC rather embarrassingly has ignored the matter, choosing to ignore not only the elephant but the herd of elephants in the room.

I know that one of the excuses that will be given is that the services are new, but this cannot explain the calculated and deliberate attempt to protect the Ethiopian government from embarrassment at the expense of the BBC.

A perusal of the comments being made on the Facebook pages of BBC Tigrinya and Amharic will show that the services have failed to capture the imagination of the target audience as they are seen to be mere extensions of the Ethiopian government’s propaganda apparatus.

In light of the serious adverse implications to both your reputation and that of the BBC, I urge you take a direct personal interest in resolving this matter, in order to ensure that the BBC operates within the confines of its Charter and expectation of the British people.

If one was to subscribe to the idealistic image of the BBC, one would expect the Director-General to be concerned. However, it turns out that the only thing that transpired from the letter was the issuance of an order to ‘CLOSE ME DOWN’, terminology I associate with the German government of the 1930s rather than the BBC of 2017.

Three days after the above email, I was informed, to coin their phrase, that I had been ‘closed down’. This meant that the BBC now did not have to deal with my complaints. This was done in direct breach of the BBC charter, which states that before the BBC could take the steps it did, it would have to give ample notice.

However, in my case the very person that sent me the email to inform me that I had been ‘closed down’ had a couple of days before had actually thanked me for my vigilance.

Despite its criticism of others not abiding by the law, when the BBC sees fit, it simply disregards its own Charter. 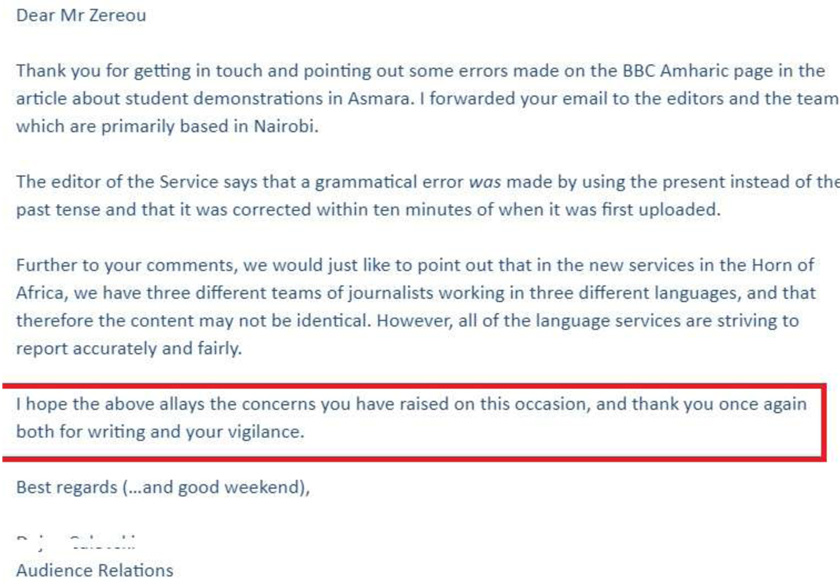 In the end, it might have taken me slightly longer than my mother, but I too have realized that the BBC is nothing more than an aging fat wolf who has long outgrown its threadbare sheepskin.

Here is hoping for a future where we do not have to choose between supporting the BBC by paying the license fee or face prison for refusing to do so.