Nevsun Resources (NSU) stunned markets a couple of weeks ago with a radical change in strategy. The new mine plan for Bisha in Eritrea included the shelving of plans for underground operations at the Bisha and Harena and curtailed open pit mining at Bisha. Only four years of mine life were left in this once proud operation when the dust settled.

The company is shifting focus to Timok and plans to have this mine in Serbia up and running when Bisha will close its gates in 2021.

Markets were clearly surprised by this move, although in hindsight the writing had been on the wall for some time. Primary ore metallurgy at Bisha had been causing trouble all year and apparently these issues could only be partially resolved.

As a result, the primary ore at this mine has turned out less valuable than originally assumed, prompting the new CEO Mr. Peter Kukielski to clean this slate; his tenure will be defined by the fate of the Timok project, rather than the Bisha mine.

Bisha has been demoted to second fiddle in Nevsun’s portfolio, good enough to fund a good portion of mine development at Timok but no longer the company focus it used to be.

The technicalities of this decision are documented in the latest technical report on Bisha, and the plans for Timok will be made public in an updated PEA this autumn followed by a PFS (pre-feasibility study) early next year. The earnings call also provided some insights into the company’s new direction, all of which was discussed on the Itinerant Musings chat board.

One particular comment made by Mr. Kukielski received some puzzled comments from subscribers, but garnered practically no attention at all in the lengthy Q&A session that followed the call:

“Moving forward, my vision is clear, to build a strong, multi-mine mid-tier mining company that delivers long-term value for all stakeholders.”

With Bisha entering a twilight phase, and Timok still under development for at least four more years surely this vision would have to include M&A (mergers and acquisitions), but with the share price at 7-year lows and all the available cash needed for the Timok build-out one wonders how a corporate move towards mid-tier status could be financed. 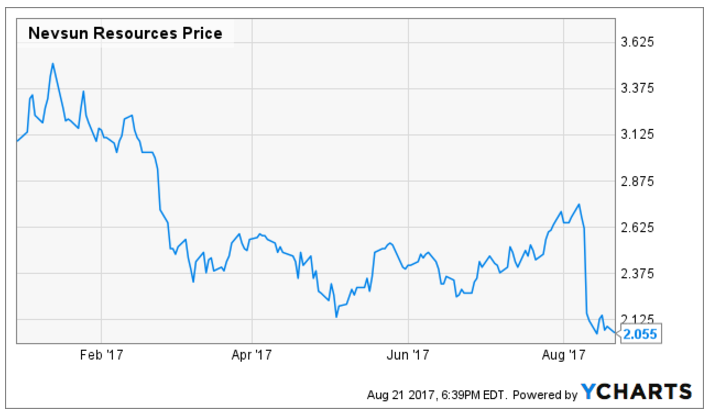 Realistically, one would have to view the new Nevsun first and foremost as an acquisition target, rather than an acquirer at this stage. And of course, in this context, one cannot help remembering Lundin Mining’s (OTCPK:LUNMF) effort to purchase a stake in the Timok project just over a year ago which was ultimately topped by Nevsun Resources. At the time, Lundin Mining offered $262.5M for a 75% interest in the Upper Timok zone plus a 21% stake in the Lower Zone.

Scaling this offer up for the Timok project as it has ultimately ended up in Nevsun’s portfolio, this original offer would amount to roughly $350M. Noting that Mr. Market has reduced Nevsun’s enterprise value to just $443M one cannot help but speculate whether Lundin Mining is having a second look. And by the same token, we hear from some trusted sources that First Quantum Minerals (OTCPK:FQVLF) has been poking around the Bor area in Serbia, which is also home to the Timok project, and that’s yet another mid-tier miner ready for a development project and known for its aggressive manners when it comes to M&A.

Plenty of speculation already, but none of it pertaining to the stated vision of the new CEO we readily admit. However, after a bit of mulling, here is another scenario – purely speculative of course – but this time it fits Mr. Kukielski’s bill. Dundee Precious Metals (OTCPK:DPMLF) operates a gold mine across the border in Bulgaria, and owns some large exploration properties adjacent to Nevsun’s Timok project.

In fact, these exploration properties fit Nevsun’s like a perfect puzzle, and the combination of the two holdings would spell dominance of the whole district. And not only that. There is quite a bit of arsenic present in the ore that will be mined from a future Timok mine, and only very few smelters accept concentrates with high arsenic content. Dundee’s Tsumeb smelter in Namibia is one of them.

There are other aspects adding to the attraction of a combination between Nevsun and Dundee, but we shall stop our speculation at this point, and will make sure to boast should it ever materialize.