Noting China cherishes the traditional friendship between the two countries, Wang said the Chinese side is willing to strengthen exchanges, enhance understanding, deepen mutual trust and achieve common development with the Eritrean side.

Osman said Eritrea regards China as a long-term and true friend. The Eritrean side welcomes China to play an active role in promoting peace and stability of the Horn of Africa and is willing to promote exchanges and cooperation in various fields with China.

"Eritrea and China stand ready to build a healthy & strong partnership for the benefit of their two peoples". This was affirmed by Foreign Minister Osman Saleh and his Chinese counterpart, Wang Yi, at the meeting in Beijing yesterday. pic.twitter.com/sHahoBeklm

The two sides assessed their relations to date & discussed ways & means of boosting cooperation in various fields. FM Wang affirmed that China welcomed the positive developments in the Horn of Africa & underlined its readiness to help in the consolidation of the process underway

Foreign Minister Osman Saleh congratulated the Chinese Government & people for the remarkable progress they have achieved. FM Osman & Presidential Adviser Yemane G/ab are in China for three day visit during which they will meet several government officials & heads of enterprises pic.twitter.com/UcY8phCAZh

The Eritrean delegation met and held talks on 6 May in Beijing with the Chinese Minister of Foreign Affairs, Mr. Wang Yi focusing on bilateral relations and mutual cooperation as well as on regional and global issues of interest to both countries.

Expressing Eritrea’s readiness to develop strong cooperation with China for the benefit of both countries, Foreign Minister Osman Saleh said that Eritrea supports the role of China in ensuring peace and stability in the Horn of Africa.

Indicating that the policy of China towards Africa is based on non interference in the internal affairs of countries, Mr. Yang Yi said that China welcomed the positive developments in the Horn of Africa and underlined its readiness to contribute in the consolidation of the ongoing process.

The two sides assessed the relation between the two countries to date and discussed ways and means of boosting cooperation in various sectors.

During its stay in China, the Eritrea delegation will conduct similar discussions with various Chinese officials and investors. 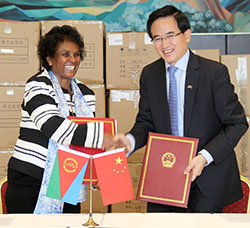 The Embassy of the People’s Republic of China has extended material support to the National Union of Eritrean Women aimed at developing human resources of the union.

At the handing over ceremony that was conducted on 30 April, the Ambassador of the Peoples Republic of China, Mr. Yang Zigang said that the material support attests to the friendly relations and good wish between the Chinese Women’s Federation and the National Union of Eritrean Women and expressed expectation that the materials will have significant contribution in the human resources development of the union.

Explaining the long standing and historical relations between Eritrea and China, the President of the NUEW, Ms. Tekea Tesfamicael said that the support is in continuation of the previous stationery and gymnasium materials support the Embassy extended to the union.

The ceremony was attended by staff members of the NUEW and Embassy of China.