With the growing threat of the Islamic State of Iraq and al-Sham in Africa and shifting alliances in the region with the Arab Gulf states and Egypt, it is in the best interest of the incoming US administration to reassess engagement with Eritrea, a country which could play a significant strategic role in countering conflict and extremism, an expert on African politics said at the Atlantic Council on December 8.

According to Dan Connell, a visiting scholar from Boston University’s African Studies Center, “there’s a lot of reasons that if [the situation in Eritrea] is left unattended, it’s not going to stay the same, it’s going to get worse.” He added, “for a dealmaker, this is not a hard deal to make,” referring to US President-elect Donald Trump.

While US relations with Eritrea are “not on the top ten list” for the Trump administration, said Seth Kaplan, a professorial lecturer at the Paul H. Nitze School of Advanced International Studies at Johns Hopkins University, he claimed that addressing instability and the threat of conflict in the Horn of Africa is a way to make a positive change, in the best interest of the United States, without taking an excessive diplomatic risk.

In particular, Connell cited the resolution of border tensions between Eritrea and Ethiopia. The border has been contested since Eritrea won independence from Ethiopia in 1991, and continued hostilities contribute to instability in the region. Kaplan also stressed the importance of lifting US economic sanctions on Eritrea, and addressing economic issues which drive many to emigrate to Europe.

Kaplan said: “For the new administration, it is not a high priority, but for those senior diplomats whose focus is Africa… those are major areas where we’re trying to reduce conflict, stabilize situations, [and] reduce the spread of terrorism.”

Connell and Kaplan joined Bronwyn Bruton, deputy director of the Atlantic Council’s Africa Center; and Athony Carroll, a nonresident senior associate with the Africa Program at the Center for Strategic and International Studies, to discuss the recent publication of two reports on Eritrea.

The first report, Eritrea: Coming in from the Cold, authored by Bruton, argues that reengagement with Eritrea is in the best interest of the United States and examines the means of achieving an improved relationship.

Kaplan wrote the second report, Eritrea’s Economy: Ideology and Opportunity, which examines the dichotomy between ideology and economy in Eritrea, using that understanding as a basis from which to encourage reform.

Connell said that the central issue at stake is “what direction Eritrea is trending in now, and what can the United States do to encourage constructive change.” 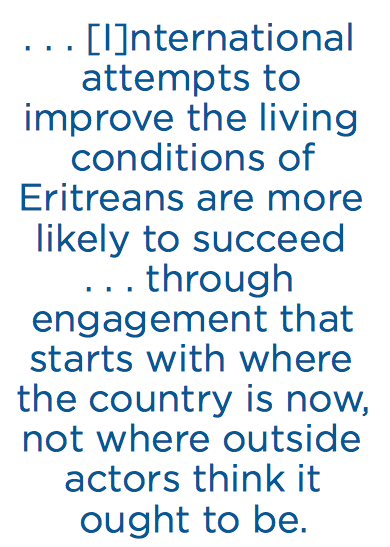 Bruton’s report contains “recommendations for a rethought US approach to the Eritrean government and the situation in Eritrea,” she said. Calling for the United States to lift sanctions, cease the personalization of politics in the region, and address the threat posed by Ethiopia, Bruton said that “the United States should make it clear to Asmara through a series of actions, a series of gestures, that the door is open for a better relationship.” Not intervention, but “positive, reinforcing steps” should end the policy of isolation, which “has not been a force for good in Eritrea,” she said.

According to Kaplan, “lack of interaction with the international community has reduced the country’s ability to learn, develop, and modernize itself.”

Kaplan compared Eritrea to other countries with socialist nationalist ideologies, such as China, Vietnam, Rwanda, and Cuba, claiming that “Eritrea’s whole economic system is based upon a certain worldview, a certain ideology.

”This ideology is defined by self-reliance focused on local solutions. Consequently, Eritrea has pursued an economic policy that is more stable than dynamic. “There’s a logic to trading dynamism for stability,” said Kaplan, “but it limits the economy… and has great repercussions for the country’s financial stability.”

One major factor to be considered is the element of Eritrea’s National Service, a program which enlists the country’s youth into service as soldiers and civil servants. To escape enforced service, many young people flee the country, contributing to a significant flow of emigrants to Europe. Additionally, the program poses a serious risk to the reputation of investors involved in the country.

However, according to Kaplan, the ideology of Asmara will not change. He claimed “the country is unlikely to change dramatically, therefore change can only take place if we work where Eritrea is, and not where we want Eritrea to be.”

He described how the international community, due to issues of human rights and emigration, has strong opinions on Eritrea’s path, and he said countries seeking to provide assistance should not change their goals, but reconsider the most appropriate means to achieve them.

In particular, Kaplan said that US sanctions have caused foreign investment in Eritrea to plummet since 2005. 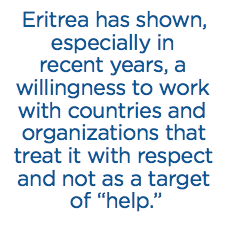 However, Carroll, who also serves as vice president of Manchester Trade Limited, an investment advisory firm, described the challenges facing potential investors in Eritrea. He cited issues related to governance, rule of law, competitiveness of the service sector, availability of foreign exchange, engagement with partners, policy predictability, risk insurance, and threat to a company’s reputation as serious deterrent. Thought the situation in Eritrea is “not all doom and gloom,” Carroll said, “as an investor, you can’t be naïve or ignore these many challenges.”

While he believes there will be no immediate appreciable change, Carroll described a five-year horizon for the opportunity for greater investment in the region. He cited sectors such as agriculture and tourism as routes for potential growth and exploration. In particular, Carroll said that, in the wake of the British vote to leave the European Union, the United Kingdom will need a new trade agreement, and Eritrea could present an option for agriculture exports.

Kaplan added that, while Eritrea’s government is taking steps to reengage on the world stage and he sees potential for improvement, fundamental change is unlikely.

However, according to Connell, economic potential is contingent upon the region’s stability, and “engagement is the best route out of these crises.” He said there is no way to encourage positive change in isolation from the wider regional context, particularly the hostility between Eritrea and Ethiopia.

Connell said that settling the border war is the vehicle by which to rebalance relationships while simultaneously curbing refugee flows and the spread of radicalism.

“The cycle itself needs to be broken,” he said. “We need not a truce, but a genuine peace where each side gives up efforts to undermine and overthrow the other.”

According to Connell, “this is a really good time to be rethinking not just Eritrea, but the wider region.” He said, “engagement is the vehicle here, not the end.”

Contending that the recommendations made in her report are free, easy, and devoid of diplomatic risk, Bruton called for the US government to “put the ball in Asmara’s court. No one is going to pay attention to Asmara if they don’t do something.” She added, “if Washington makes it clear that the door is open, they need to walk through.”

Rachel Ansley is an editorial assistant at the Atlantic Council.