Eritrea has backed Saudi Arabia and its allies in the ongoing Gulf diplomatic crisis that started last week after Gulf nations cut ties with Qatar for allegedly supporting extremist groups.

The Eritrean government said in a statement on Monday that its decision is in the right direction to realise regional peace and stability.

“The decision by Gulf nations is among many in the right direction that envisages full realisations of peace and stability … For Eritrea, this is a timely issue that warrants its active support,” the statement cited by local media said.

This statement comes a day after a visit by Qatari officials to Asmara and Addis Ababa seeking support in the ongoing crisis.

Ethiopia did not take sides and called for dialogue to settle the differences.

Other African countries have also taken sides in the diplomatic row with Chad recalling its ambassador from Qatar “for consultations” after Senegal recalled its envoy citing its “active solidarity” with Saudi Arabia.

Mauritania, a member of the Arab League, severed ties with Qatar following the lead of Saudi Arabia, the United Arab Emirates, Bahrain and Egypt – while Gabon condemned Doha.

Guinean President Alpha Conde offered to mediate in the diplomatic crisis in his capacity as chairperson of the African Union to find a swift and peaceful solution. 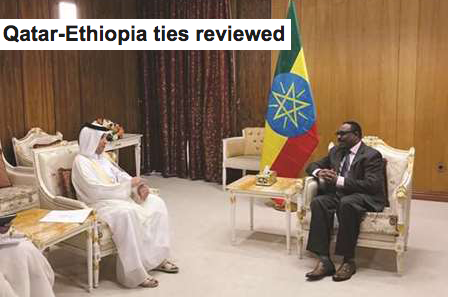 Somalia also expressed concern and advised that it should be settled with dialogue after it expressed neutrality. This resulted in a recall of the United Arab Emirates ambassador in the capital Mogadishu.

The government of Seychelles also called on all the parties involved to engage in meaningful dialogue in order to resolve and deescalate the current situation.

Qatar has denied the accusation by Saudi Arabia and the United Arab Emirates that it supports extremist groups.

Its airline – Qatar Airways – has been banned from landing in the Gulf nations while land borders have been closed affecting its food supply.

Turkey has described the isolation of Qatar as “inhumane and against Islamic values” while calling on Saudi Arabia to solve the crisis.

Iran supported Qatar by supplying food to the country.

The United Nations says it is working to ease the tension.


Qatar has announced US$10 million in humanitarian assistance for Somalia and US$3 million for Ethiopia https://t.co/iUDbR9bu9Q pic.twitter.com/X8G0LxypWD