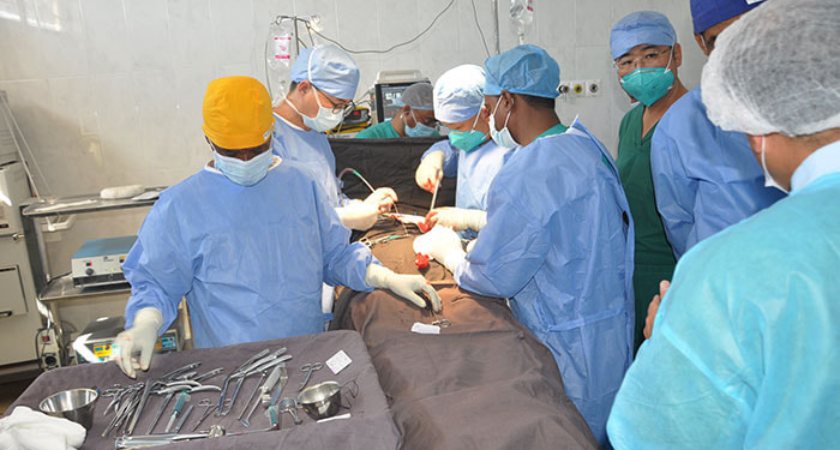 Speaking to Erina, Dr. Luul Bayterga, Medical Director of Halibet Hospital said that the Chinese health professionals have been working in Halibet and Orotta National Referral Hospitals and that the surgeries that are being conducted are first of their kind here in Eritrea.

Noting that all spine surgeries are major surgeries that can carry higher risks because they are done closer to the nervous system, Dr. Luul said that the start of spine surgeries here in the Hospital creates a respite for nationals with spine problems.

Dr. Solomon Tsegay, bone and muscle surgeon on his part, underlining the significance of the start of spine surgeries said that the Chinese medical team in addition to extending medical support is transferring their knowledge to their Eritrean counterparts.

Dr. Mihreteab Yemane, from the Department of Surgery on his part, said that the start of spine surgeries in Halibet Hospital will enable nationals with spinal cord problems to get surgeries here in their countries at low expenses and called for its sustainability.

Indicating that they have already conducted successful spine surgeries on five patients, the Chinese medical team on their part said that they will continue performing surgeries on others.

Patients who undertook spine surgery on their part commending the opportunity created for them here in their country called for its sustainability.

The CMT & Eritrean counterpart held a free clinic today to commemorate 25 Anniv of China’s dispatch of medical teams to Eritrea. More than 100 patients provided with medical services and Chinese acupuncture and massage. Officials from China & Eritrea addressed before the clinic. pic.twitter.com/YzoAnsnwDm