Eritrea Earned US $1b+ in Revenue from Bisha

BASED on the “Publish What You Pay” initiatives supporting financial transparency and accountability, Nevsun Resources Ltd. today disclosed that it has generated nearly 2 billion dollars in revenue from its Bisha Mine and pays out over $1.0 billion to the Eritrean government since commercial operations at the Bisha Mine began in 2011.

The disclosure comes in a publication when the company released its 2014 CSR Report.

The Corporate Social Responsibility report illustrates in detail how the development of the Bisha Mine have made a considerable monetary difference to the country which has had, and will continue to have numerous domestic spin-off effects.

The Bisha Mine provides revenue to the Eritrean Government by way of corporate income taxes, royalties, employment taxes, and distributions to ENAMCO, the state owned mining company.

Accordingly, US $755 million was paid out in the form of income taxes, royalties and other government remittances; while US $299 million paid in local supply of goods and services.

Nevsun also stated in the report that some of the funds paid to local suppliers for goods and services are ultimately sourced from outside of the country. The single largest example was the approximately $42 million it paid for fuel.

The Bisha Mine is so far the only modern mine in the country. However, Sunridge Gold’s Asmara Project and Chinese owned Koka Mine are inline to start production before the end of this year.

The overall effect of these mining investments in the country have a positive and significant impact on the Eritrean economy through wages, taxes, and long-term investments. It will also have a substantial boost to the local businesses within the country’s mining supply chain and to its citizens by providing opportunities for skills development through training and community support.

Payments made by Nevsun to the Eritrean government and government-owned entities from 2011 – 2014 are included in the following two charts: 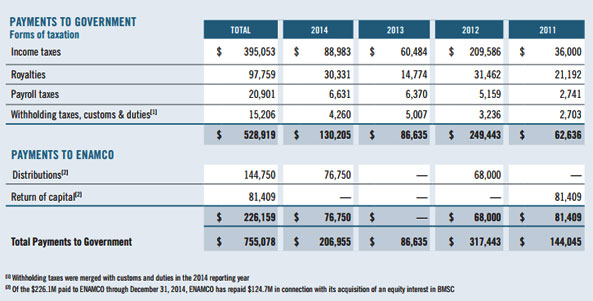