Matthew Russell Lee, a reporter working at the United Nations Headquarter, says Eritrean diplomats believe the sanctions against Eritrea are close to being removed.

“Some Eritrean diplomats believe they may be close from being “taken off” of sanctions.” Said Matthew, in a report released last Wednesday to subscribers.

According to Mattew, the upcoming SEMG report is ‘lite‘ on Eritrea violations; a stark difference from its previous reports which caused several members at the Security Council, including veto-wielding Russia, to accuse the monitoring group’s report of being dishonest and biased towards Eritrea.

“Russia objects to the publication of the (Eritrea) report due to the biased and groundless conclusions and recommendations contained in it.” Said Vitaly Churkin, the Russian Ambassador to the U.N., after reading the previous monitoring group’s report on Eritrea.

Last year, the SEMG finally admitted it has no evidence that Eritrea supports al-Shabaab or any militants in Somalia. Even after stating this fact, it still recommended the sanctions remain on the country.

Eritrea’s UN envoy said Asmara has petitioned the Security Council to lift sanctions on his country after a monitoring group said it found no evidence that Eritrea supports the Somali-based Islamist militant group al-Shabab. – VOA

Recently, a Somali official said his government has no evidence to suggest Eritrea is arming al-Shabab or warlords in Somalia, and described SEMG’s report as ‘irresponsible and very misleading.’ 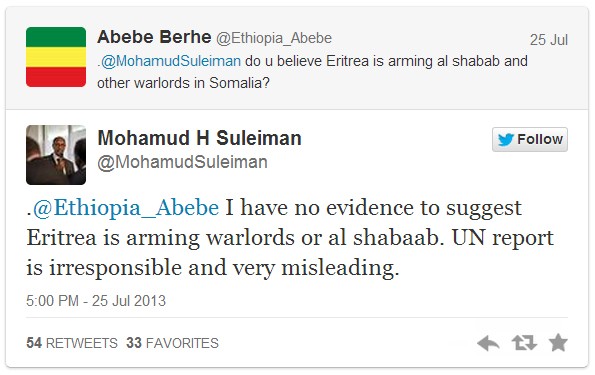 Despite the irrefutable evidence showing Eritrea has nothing to do with al-Shabaab or warlords in Somalia, the sanctions have remained largely due to U.S. officials at the Security Council wanting to ‘punish‘ Eritrea for challenging U.S.’ foreign policy in the region.
– – – – – – – – – – – – – – –

Please support Matthew Russell Lee by subscribing to his reports of what really goes on behind the scenes at the UN Security Council. It’s important to remember, most of the insider information we read about Eritrea at the Security Council comes from him. His honest approach to journalism has made him a lot of enemies from other major news agencies. It only costs 5 dollars to get access to his content, so please show him support by visiting here and subscribing.
– – – – – – – – – – – – – –