In two weeks Eritrea lost heroes that represented the struggle towards liberation, men and woman that embodied the essence of the Eritrean way of life in good and tough times. Eritrea lost leaders that ignited the struggle, lived it and in the process amassed credentials that seem super human. These are selfless leaders that placed Eritrea above all by making it their mission, purpose and their sole reason for living. They lived and died for Eritrea.

These individuals made what is impossible possible. They motivated, helped-tart and completed the Eritrean struggle for independence. As if that were not enough, they took on the daunting task of reviving a nation they snatched from tyrannical leaders that brutalized Eritreans for decades and helped to create a platform that is ensuring a bright future for the people of Eritrea on many fields.

And as such, Eritrea honored their lives in a unique way by bidding farewell deserving of heroes. They were honored in death with processions and services fitting to the credos and values they espoused when alive.

On August 8, I attended the burial service of Singer, Song writer, teacher Ustaz Alamin Abdeletif and a veteran fighter for independence Habte Abrha. As I witnessed the event in mourning, I realized that I witnessed history. I realized what their collective lives represented. Most importantly, I witnessed how the people of Eritrea viewed and honoured their lives.

It was a cloudy afternoon in Eritrea’s Veteran Cemetery in Asmara. The entire cemetery was full of people that came to honour the fallen heroes. I manged to push forward and came close to the burial grounds. And what I witnessed was reminder of what these heroes meant and what they represented.

They represented peace and harmony that they ensured through bitter struggle. They ensured a platform of stability whereby their legacy is ensured for eternity as affirmed by their people during their burial services. 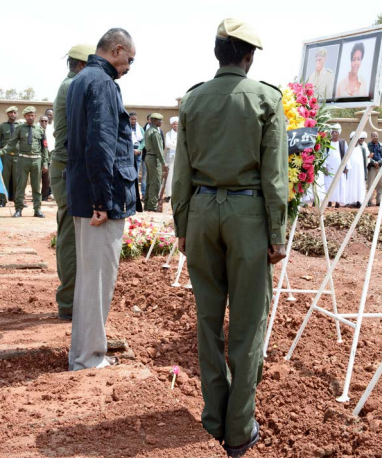 There is no place on earth today where one can witness Moslem clerics and Christian Priests from various denominations stand side by side to conduct burial services and bury their fallen heroes next to each other, at once and flawlessly.

At first, brief life history of veteran fighter for independence Habte Abrha was read. Tegadalay Habte had been sick for a while and received treatment in and out Eritrea. Teg. Habte has amassed incredible resume that is impossible to fathom. A fighter, regional administrator involved in reviving the nation’s economy, worked on nation’s welfare programs and foreign services just to mention some. His life story sounded like that of a martyr that accomplished everything he set out to do and he did it tirelessly until his passing.

And then the life story of Memhir/Ustaz Alamin Abdeletif was read. His story was familiar to me because I grew up listening to him. As a child, in the seventies, my brother Tesfaghiorghis (Kokah) took me to Cinema Odeon to see MAT-A and witnessed Alamin perform Seb Nikebdu Tiray Aykonenen Zinebir. I was mesmerized and in awe with the theatrics of his presentation and the message that resonated true then as it is today.

In life Alamin was a professional teacher. He taught in Jalia Islamic school in Asmara. But his passion was singing which he used as extension of his profession and educated, motivated and passed on settle political messages in difficult times. He used poetics to code messages that expressed Eritrean nationalism. As a result, Alamin suffered the consequences in Ethiopian prison cells.

After independence, he was amongst the first to return to Eritrea to enjoy independence and contribute on the rebuilding of a new nation. Alamin toured around the world and inspired Eritreans with his legendary voice.

Unfortunately, a week after the passing of Teg.Habte Abrha and Ustaz Alamin Abdeletif, I returned to the US to see social media ablaze with sad news.

Brig. Gen Musa Rabea was one of the veteran fighters that joined the struggle early. His commitment to fight for independence and ensure a bright future for the nation was demonstrated by his contribution in various fields. One hallmark of the Eritrean revolutionary veterans is the flexibility and ability they must have on various fields to achieve different objectives. Brig. Gen Rabea was one of the exemplary individuals that worked at high levels on the military, regional administrations and oversaw the transition from struggle to independence to where it is today and anchored Eritrea on solid foundation.

Governor Tsgereda Woledegergis passed at young age of 57. Like her colleagues, her accomplishments were stellar. She joined the struggle in 1978 and fought, won independence and went on to become Governor of the Northern Red Sea Region.

To put it on a context; over the last two decades, Eritrea faced tremendous pressure by the Western world that aimed to destroy it. They imposed blockades and sanctions to decapitate and suffocate Eritrea to death. Despite their ill attempts, the Red Sea region is on a platform they never imagined seeing. It has expanded by leaps and bounds and is likely to become Eritrea’s engine for future growth. Teg. Tsgereda oversaw these transitions as governor of the region.

The accomplishments by the beloved veteran fighters may appear trivial to some. However, it is impossible to see accomplishments of this magnitude anywhere in the world today. No one can rival these accomplishments. Simply, they all fought to free a nation achieved it and went on to place Eritrea on a platform of growth with a bright future based on solid foundation! Collectively and for over half a century, these men and woman toiled and sacrificed tirelessly for Eritrea.

The beauty, the people of Eritrea understand this and honored them in such a way that reflected the values these revolutionaries lived by and died for. They gave them the burial service that they deserved. Without bias to gender, religious division Eritrea honored them as heroes and laid them side by side as one. That is sizeable show of gratitude and blessing for the martyred.

Eritrea will endure because young generation of leaders that are sons and daughters of the revolutionaries and the Warsai Yikealo are taking the baton. The question for all, what is the lesson here? What are we going to learn from this? And what can we do to top their legacies? How can we continue the torch they lit, and ensure it is burning forever in their honor? Social media R.I.P’s will not do it. We must dig deep, find the core, the essence and embrace the challenge they bestowed. It is very important to heed the message of Ustaz Alamin, “Seb Nikebdu Tiray Aykonen Zinebir!”