BY RICHARD BISHUMBA | THE NEW TIMES

African cycling powerhouse, Eritrea has named a star-studded final squad to compete at the 14th edition of the annual UCI Africa Continental Road Championships slated for February 13-18 in Rwanda.

The Eritrean Cycling Federation released the squad on Monday night, which is composed of 17 riders, including eight U23 and elite riders, four elite female riders, one junior female rider and four junior male riders.

The 2016 African cyclist of the year Tesfom Okubamariam, 26, who is one of the star riders to watch, will lead the 8-man roster for Eritrean U23 and elite riders.

The two-time (2014 and 2016) champion in Elite Men’s Road, Tesform will be the first to win the highly rated accolade three times if he claims the title in Rwanda.

The 8-rider roster of star cyclists on the continent also includes Mekseb Debesay and Amanuel Gebrezgabiher who ride for Dimension Data for Qhubeka’s UCI World Tour team, Meron Teshome of Germany’s Bike Aid and Eyob Metkel who finished second in the last two editions of Tour du Rwanda, first in 2016 behind Valens Ndayisenga and last November, 28 seconds behind Joseph Areruya.

Other cyclists on the squad are; Elyas Afewerki who finished 5th at the 2016 Tour du Rwanda, Henok Muluberhan, and Simon Mussie.

The Elite women’s line-up is made up of Mosana Debesay, Wahazit Kidane, Bisrat Gebremeskel and Tigsti Geberihiwet. The sole representative in women’s junior category is Desite Kidane.

Eritrean riders have the Team Time Trial (TTT) for a record seven consecutive times since 2011.

Since its inception in 2001, Eritrea has won more medals in African Continental Road Championships than the rest of other African countries combined. 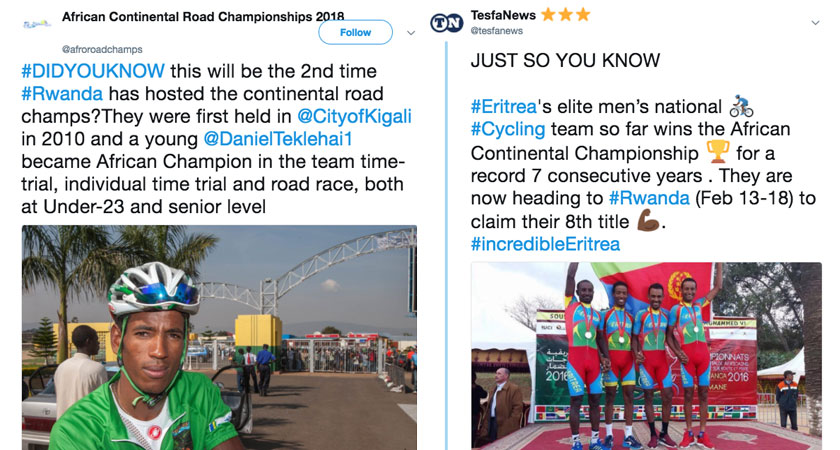