It is said that our beles (Prickly Pear) was introduced by Abba Jacobis of Hebo in 1953 when he first settled in Segeneti. Beles is a very nutritional type of fruit that can be used to fence fields and guard the soil against erosion. When dry, the stem is used as fuel instead of wood. Although some livestock eat its hardy stems in time of drought, they don’t seem to relish it altogether. I have seen sheep sniffing at it and deciding to leave it alone.

I remember someone telling me that Eritrea has the largest expanse of beles fields in the world maybe after Mexico or Morocco. This means that the mountains and ravines of A’rbe- Robue and Segeneti are the energy-producing centre’s of our country. Mountains plus sun and a little rain equals thorn plus sugar.

The only problem with beles is that it has thorns; like most cactus plants, the prickly pear cactus has long, sharp spines that protrude from the pads; the big and spiky ones that fight off predators and the fine and invisible ones that irritate the skin and fly straight into one’s eyes. But since nothing is perfect in this world, animals and people bear up with the pain and enjoy the sugary meal in quite despair.

Once I asked a beles vendor if he felt the tiny irritation of the small thorns in his skin. He told me that after some initial discomfort, the pain disappears and you start to think of your profit only. But I could see his skin all covered with rash.

A fine thorn from beles lodging in the eye is the most irritating experience a person can imagine. Airborne thorns can sometimes get detached from the beles and lodge in your eye. What do you do to pick them out? Certainly, you can’t use tweezers. You can’t wash them away with water. You can’t use your fingernails. The best and proven method is to ask someone to lick your eye (the corea) with his tongue. The fine thorn gets stuck onto the persons tongue. You are saved. But your friend will have to get accustomed to the constant sting from the thorn now stuck on his tongue. After eating dry food like Kitcha, however, the pain subsides as the thorn somehow gets a new host on the food you are chewing.

But the big problem with this fruit and which seems to have victims by the hundreds is the stony seeds that make up probably 50% of the fruit.

When we were young, our mothers used to warn us about eating large quantities of beles. You don’t heed their warning and your intestines simply get clogged and you get a type of constipation that is difficult to explain to even the most experienced of doctors. I remember mothers taking their ‘clogged’ children to the hospital who were then ‘douched’ and sometimes made to drink water mixed with berbere for fast elimination. Imagine unprocessed berbere passing through your anus on its way to the cesspool.

I know some people, who suddenly felt their system brought to a standstill, went panicky and had to be carried away to the hospital sobbing that perchance they get unclogged on time. This happens of course after gulping from 40-50 fruits at one go before meals. So it is better to partake of this exotic fruit after meals.

But who can resist roasted peanuts and ripe beles? Although it makes brave men weep in pain following constipation and subsequent berbere treatment, I have yet to see a person who comes across a beles vendor in the streets of Asmara and just pass by without buying one or two. 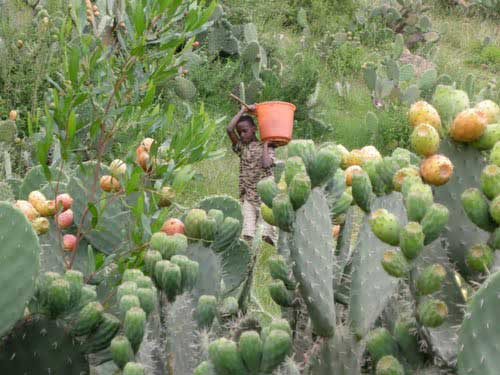 Harvesting the fruit is again a very dangerous task. First you have to have a zembil (basket made of Doum palm leaves) or gereweina (large tin can) and two sturdy feet and steel reinforced spine. Get a shaft or a pole at whose end is attached a small cylindrical tin can. Now brace yourself for a breathtaking job which requires a maximum agility and equilibrium.

You spot from a distance a ripe prickly pear among the entanglements of thorny beles stems and brambles overlooking a ravine. If you fall down, that will be the end of you. No one will risk his skin and ultimately his life to get you out of the thorn abyss where you are now laying half-dead surrounded by invisible mice and snake. Take you last bits of beles and die!

Let’s say you don’t fall and you don’t die or break your neck. Then you try to reach the ripe beles with your pole, cover the mouth-watering fruit with the small tine can at the end of your shaft and give it a fast twits. The fruit is made to dislodge from the stem and is now inside the tin can. And then you empty the content of the tin can onto the basket one by one until the container ‘runneth over’ into a pile. The pile of beles is now kept from falling by holding it tight by strings attached to the rim of the zembil or gereweina.

Now, you are official a be’al beles (Beles Vendor) and your mission is to lure children and some house wives into buying your juicy products.

When my parents were kids they bought four for a single cent. If they had ten cents in their pockets, they could buy 40 beles, enough to feed a family of nine for one day, and if you had ten kirshi you could feed a whole battalion ready to go to war.

Now you have agreed one for one Nakfa. The beles vendor unburdens himself of his zembil, you, of course don’t help him for fear of having thorns, coarse and fine, all over you. 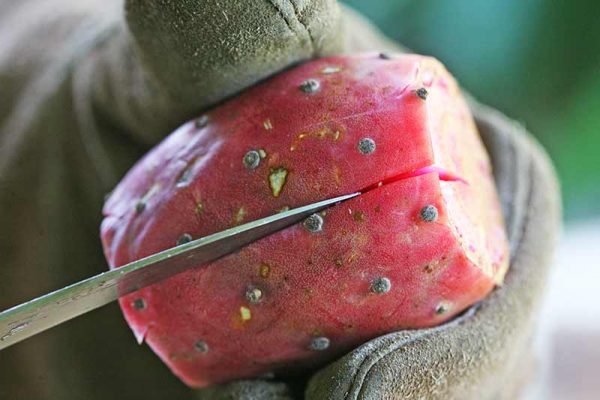 He takes his ‘pocket knife’ and starts making incisions on the fruit, first length wise and then sidewise at both ends and ‘unwraps’ it to reveal the flesh inside. You stretch out your hand and take the seed-studded fruit, put it in your mouth and crush it between your teeth, gently and softly. Unable to separate the seed from the flesh, you have no choice but to swallow the whole content. You enjoy the taste and you feel like eating more and more. Before you know it you are hooked like an addict on heroine. Someone has to tell you when to stop.

It is Mother Nature that instinctively orders your brain to swallow the crushed fruit in your mouth, hook, line and sinker. She is using you as a seed-dispersing agent. The seed will come out your bowels intact and once in the ground will sprout next year for a new generation of beles. If the mountains of A’rbe- Rebue are now covered with beles, it is thanks to the baboons that without knowing it has all the time been used as a seed dispersing agents by the smart beles.

Some people mistakenly think that beles needs rain to grow and produce fruits. Beles is a desert fruit and hates too much rainfall. That’s why it grows in hilly areas where the rainwater drains fast.

On the other hand, Prickly pear cactus has been used for healing purposes and as food for centuries. Loaded with protein and vitamins, the cactus, also known as nopal, has been used to treat diabetes, stomach problems, cuts and bruises, constipation, and cold symptoms. Folk remedies abound, such as the one that involves heating the pads and placing them on a cold sufferer’s chest to relieve congestion.

There is of course always a flower before a fruit. The flowers of the prickly pear are said to be sure medicine against clogging of the urinary tract. It seems that it has diuretic effect. You see, it clogs the anus and opens the urinary duct. Funny, isn’t it?

A lot of Eritreans talk of producing jam from beles. I have tried it myself. I don’t know which steps the people who prepared it missed, but I didn’t like the final taste.

Again there are those who advocate for the inclusion of its fleshy stems in some dishes. Once again I am not convinced of its preparation and the whole idea of cooking it with other expensive foodstuffs just doesn’t make sense.

I think the best way to enjoy it is simply to buy it from beles vendors and eat it on the spot, or perhaps wash it of its tiny thorns, take it home and enjoy it after meals.

Remember that the human intestines are not made to accommodate millions of seeds at any given time. So you should have people around you to tell you when to stop.