When people mention Eritrean opposition groups, for most Eritreans and neutral observers, the Ethiopian regime quickly comes to mind. Yet, even with the support of TPLF, Eritrean opposition groups remain highly fragmented along regional, ethnic, religious, and ideological parameters. Because of their numerous divisions and alarming ties with Addis Ababa, they have failed to gain any real support from Eritreans.

Despite their differences, one area the opposition has thrived in is the internet. The Digital Age has provided them an opportunity to stay visible, even as their followers in the real world continue to dwindle. One group that has seized this opportunity is the Eritrean Youth Solidarity for Change (EYSC).

EYSC is perhaps the most visible cyber opposition group to date. The group gained distinction after its creators used a controversial Facebook feature that lets users add friends to groups without their consent. This deceptive method was preferred after the group originally launched a FB page, in which members were required to “like” the page to join, had less than 60 participants.

Launched on Feb 14, 2011 by Solomon Assefaw, a 42-year-old Oakland resident, EYSC is a copycat group inspired by the Egyptian revolution. Although it claims to be a youth organization, the overwhelmingly majority of its members are middle-aged men between the ages of 40-65. The group says its mission is to create  “cyber-demonstration” against the Eritrean administration, with the objective of mobilizing youth inside Eritrea to “rise up” against their government. Most Eritreans, however, see the groups’ objective differently.

Since repackaging themselves as a youth movement in 2011, the group has increasingly used deceit, intimidation, vandalism, violence and terrorism as tools to accomplish their political objectives. As a result, several leading members of EYSC are being investigated by authorities in their host countries for alleged crimes involving harassment, theft, vandalism, arson, aggravated assault and conspiracy to commit murder against Eritreans in the diaspora.The following information are just a few of the crimes committed by this group within the last 12 months:

On January 31, 2013, Solomon Assefaw (the self-proclaimed vice-chairmen of EYSC and co-founder of the Facebook group), along with Fitsum A. Ghebreegziabher, aka Fitsum Arefaine and Bemnet Mesfen, were found guilty in a California Superior Court for vandalizing the Eritrean Community Cultural Civic Center (ECCCC) in Oakland. The courtroom also ordered the three men to pay restitution to the ECCCC for the damages they caused and court fees associated with the case.

On April 8, 2012, during the 8th annual YPFDJ concert in Sweden, a small group belonging to EYSC demanded they enter the private concert, in which hundreds of Eritrean youth (real ones) from several European countries were attending. After being denied entrance due to not purchasing their tickets in advance like everyone else, the EYSC members threw stones at the building housing the event and began to trash the area. Bewildered by their violent actions, one Swedish officer at the scene described the EYSC mob as:

“They took the opportunity to throw stones with no other motive than to cause trouble,” said police spokeswoman Marie-Louise Nilsson

In the early hours of January 24, 2013, a mob consisting of 16 hooligans (including two Ethiopians of the Tigray ethnicity), led by Amanuel Eyasu (editor of Assenna.com), Selam Kidane and Bereket Kahsay, rushed into the Eritrean Embassy in London to vandalize and take photo ops. What resulted was severe legal troubles for several members of the ruffians.

Just last week, a dozen EYSC men rushed into an Eritrean restaurant in Zurich, Switzerland and started trashing their furniture and attacking their customers. Two Eritreans suffered head injuries and bruises and needed medical attention. The EYSC members caused several thousand francs in damages to the restaurant. So far, Swiss authorities have apprehended three suspects in connection with the crime.

Even senior fighters of the Eritrean revolution have been targets of this increasingly violent group. On Saturday, January 14, 2012, former freedom fighter and popular Eritrean musician Estifanos Abraham (Zemach), who lost his limb fighting for Eritrea’s independence, was assaulted and beaten severely by a small gang of EYSC members in Switzerland. He spent a week in a Zurich hospital recovering from his injuries. 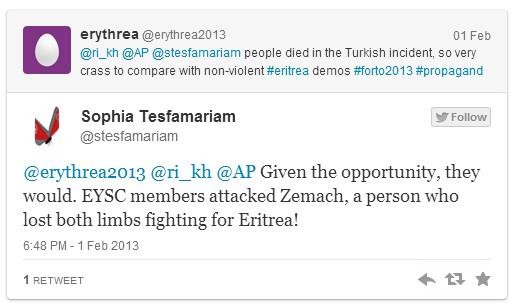 Eritreans are no strangers to being victims of violence and terrorism. For over a decade, Ethiopia has been training, arming, and funding a number of terrorist groups to destabilize Eritrea. But what separates EYSC from other violent groups is how they target Eritreans who live in the diaspora; particularly in the West. That’s pretty bold. Eritreans in the West have rejected their extremist ideas and as a result, a handful of middle-aged men in skinny jeans are tiptoeing at nights causing damages to Eritrean businesses and community centers.

EYSC’s extreme views, violence and ties with Ethiopia’s regime are just a few of the reasons why most Eritreans have rejected them and their ilks. The increase of violence coming from this group of late only indicates their growing frustration. As Eritreans, we should remain vigilant towards these violent groups, but at the same time, not lose our friendly and cultured hospitality; even towards our adversaries.

It should be recalled, when EYSC hooligans attempted to vandalize the Eritrean Embassy in Sweden last January, which happened on a day that had below freezing temperatures, staff members gave the mob hot chocolate drinks, cookies, blankets and showed them friendly hospitality. After receiving such kindness, many were embarrassed by their rowdy behavior and apologized privately. This is Eritreanism in a nutshell. Peace!  [Credit: Madote.com]