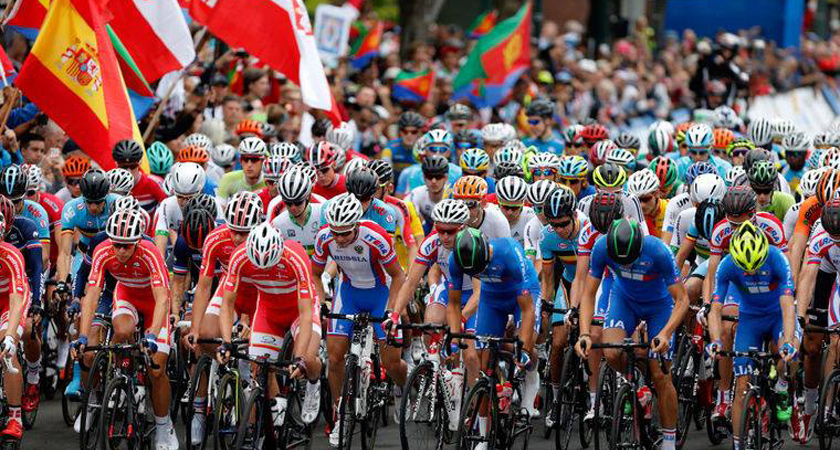 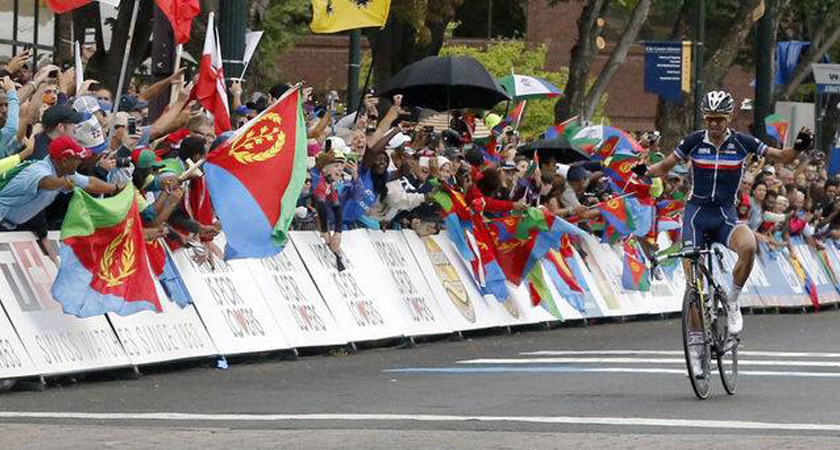 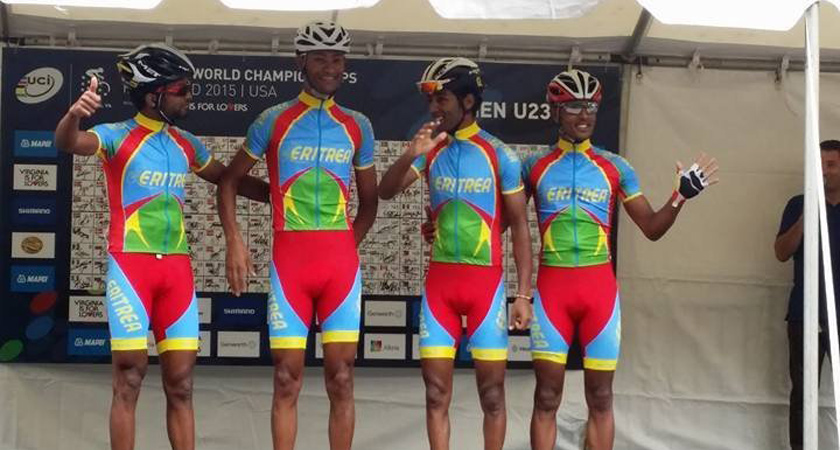 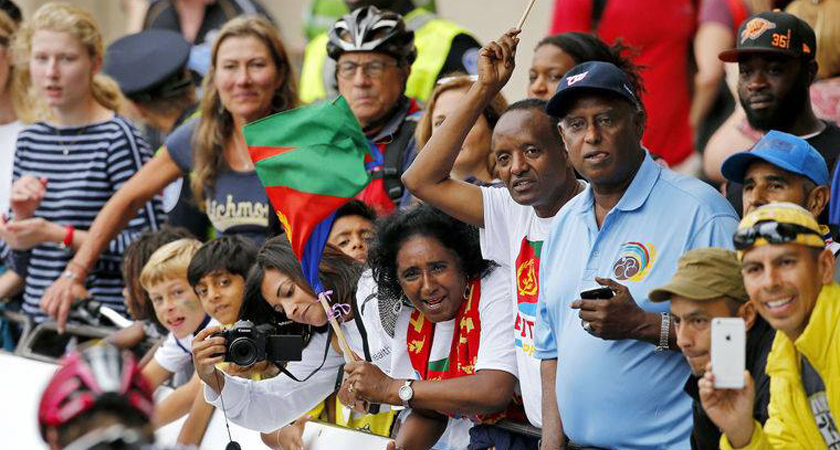 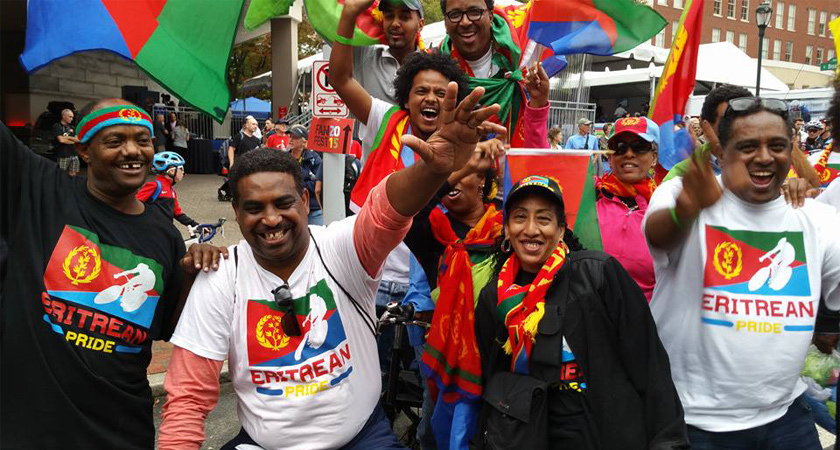 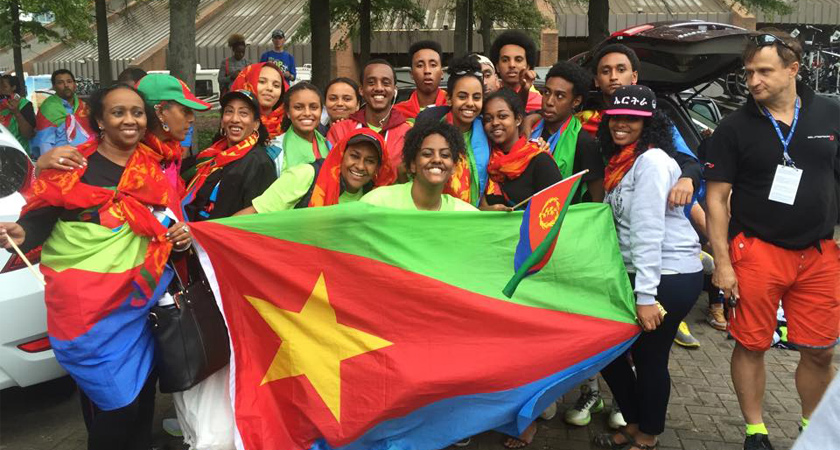 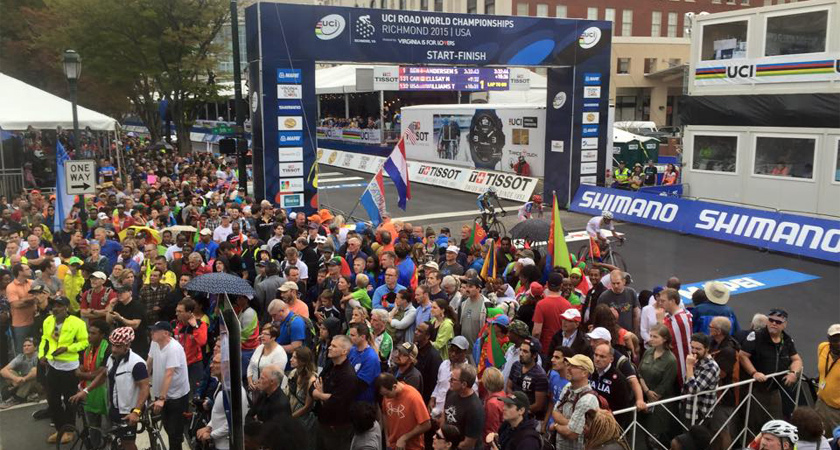 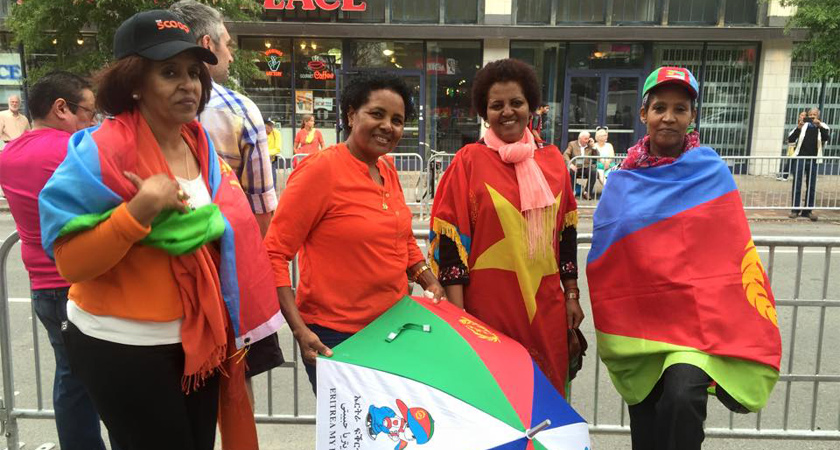 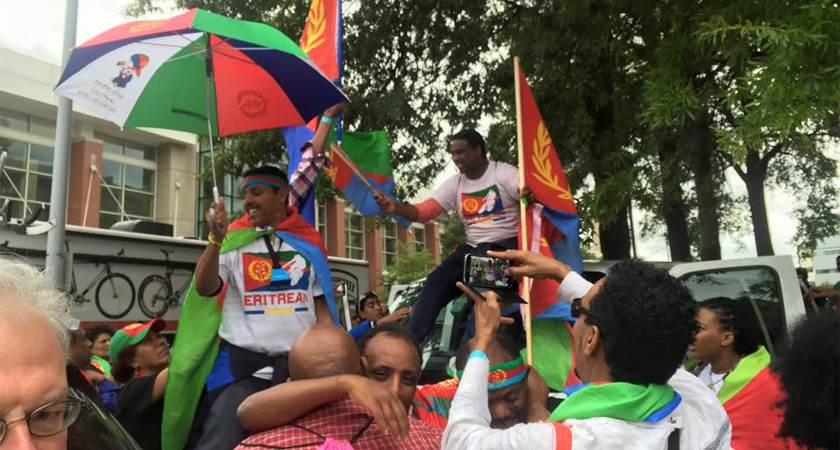 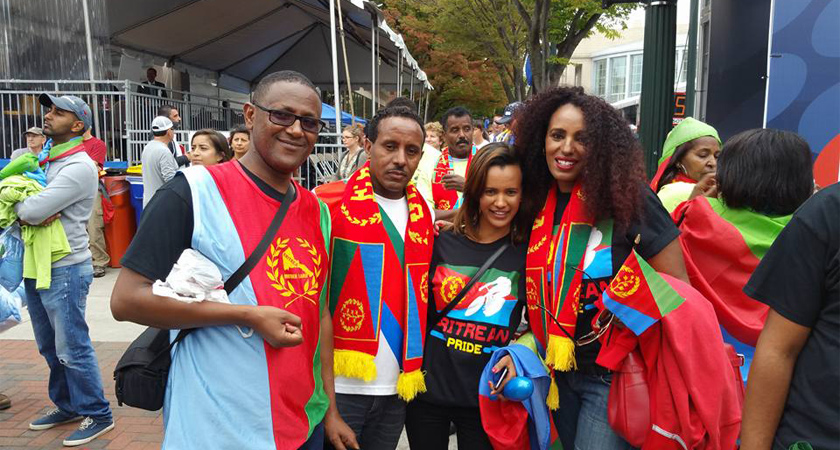 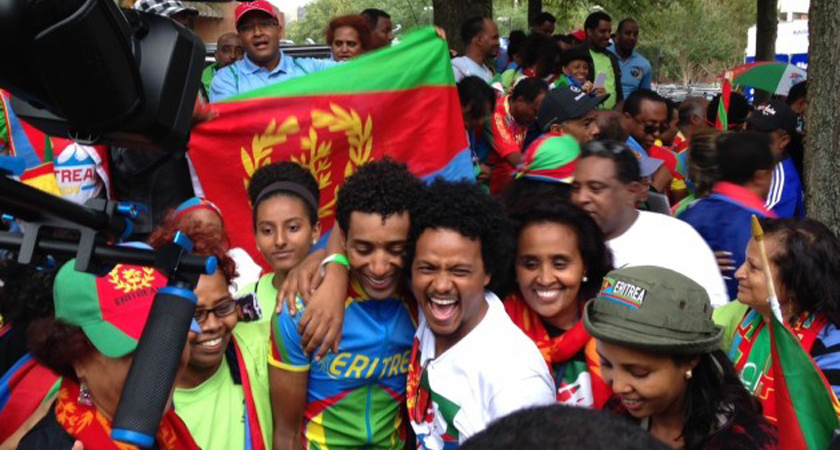 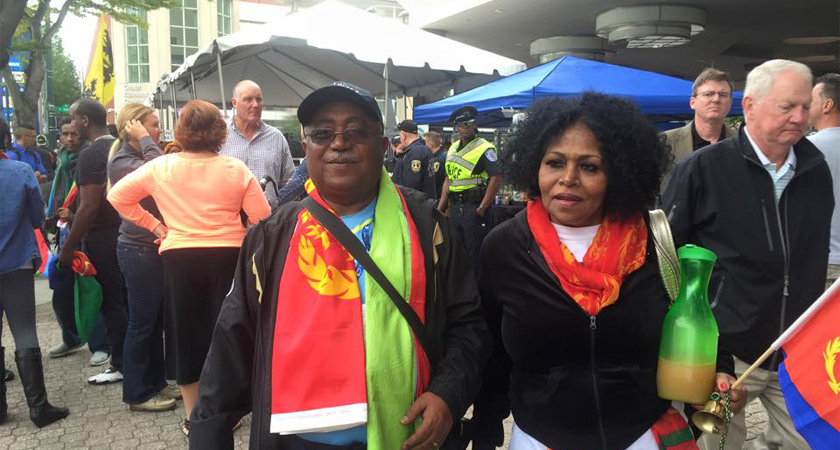 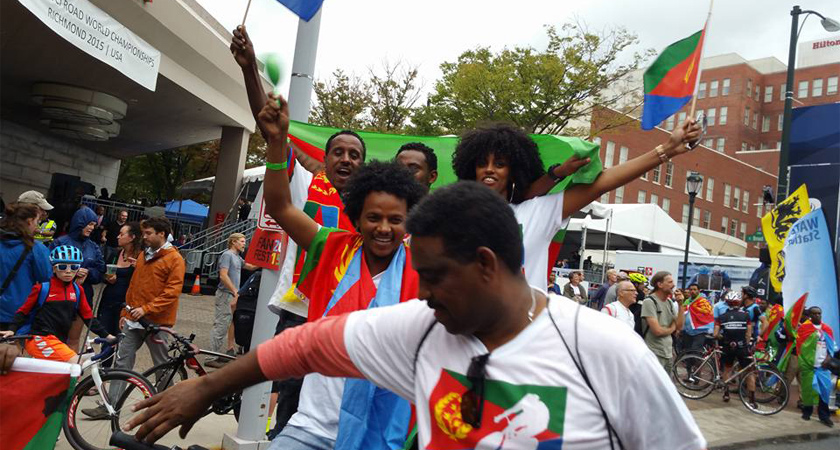 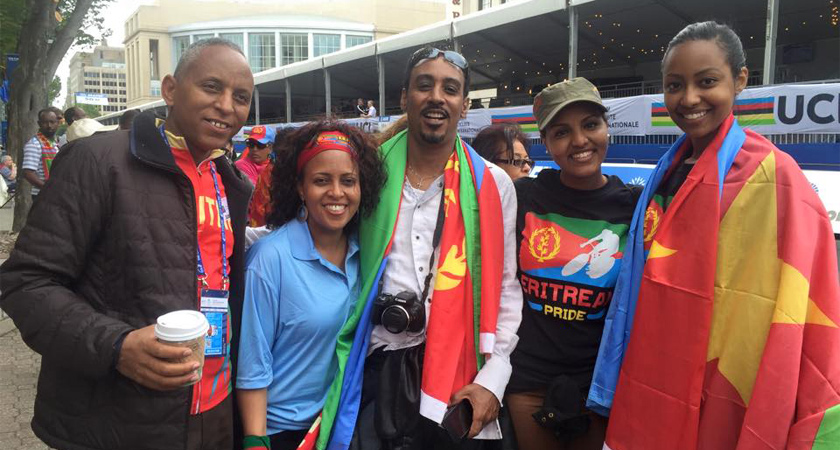 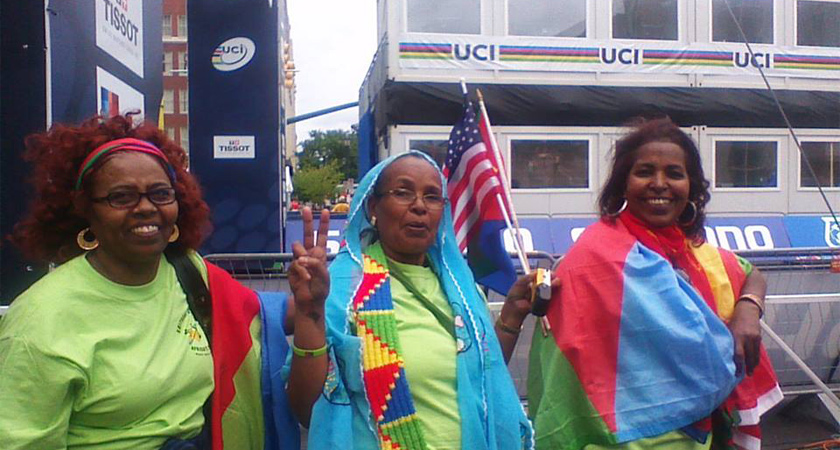 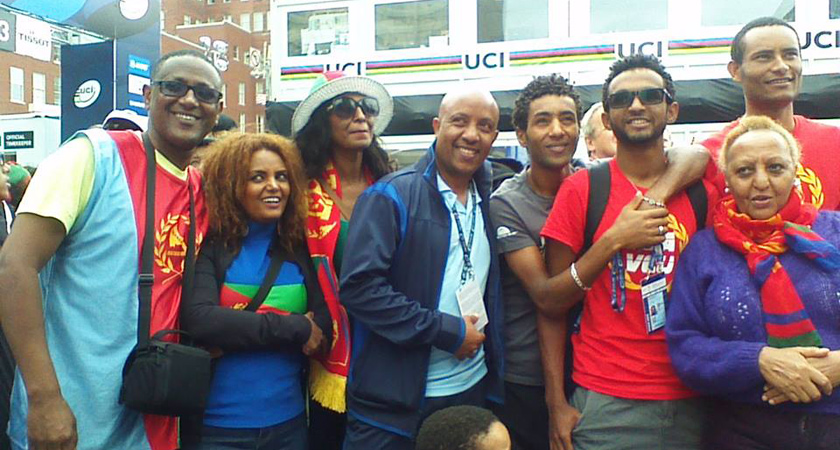 On Friday September 25, in a cool cloudy morning with occasional drizzles misting the environment and winds blowing; Eritreans from all around the US ascended on-to Richmond, Virginia, to support Eritrean cyclists that participated at the UCI Road World Championship.

The event will stand as one great achievement for the Diaspora Eritrean community that came out in large number to support Eritrea’s elite riders Mekseb Debesay, and, under 23, Merhawi Kudus, Metkel Eyob, Yonas Tekeste and Manuel Gebregziabiher.

Usually, trying to explain the makeup, psyche, and collective excitement about everything Eritrea to other nationals is at-times difficult. On Friday September 25-27, however, Eritreans did not have to explain. Eritreans surprised the participants and organizers in ways they did not anticipate.

Eritrea came and took over the sleepy power house, capital to one of the most important states of the union, Virginia. Eritreans were all over the city of Richmond in large numbers adorned with Eritrean flag, T-shirts, Scarves and, banging on the traditional Kebero (drums) through the entire road-course and the finish-line at The World Championship.

A grandmother, Weizero Kidan with her daughter Helen Debrezion and granddaughter Semrai from Atlanta, a grandfather with his sons, Sunny from Oakland, friends from Seattle are amongst Eritreans that participated from afar. Groups from the surrounding states like Philadelphia and Boston came by busses. Some flew from the Midwest states like Michigan. The majority came from the surrounding Metro DC Area. And when asked why you traveled to Richmond, they answered, we will not miss it for anything.

The simple fact that Eritrea participated in the competition is a victory in itself. But when one adds the benefits and its implication it becomes one incredible achievement for the athletes, for the Eritrean Diaspora communities and above all Eritrea, the nation.

To understand the magnitude one must look at the level of competition, the international nature of the UCI Road World Championship and its global reach. Elite cyclists from around the world participate in this event. This is an important event that shuts-down sizeable part of downtown Richmond for nine days. It attracts major cycling convention held in the convention center where the latest cycling gear is displayed and the state of Virginia promotes “Virginia is For Lovers” message to attract the young. It is a great international cycling event that handful nations that pass through rigorous cycling tests can participate. Out of 54 African countries only five participated and most are Eritreans.

As a supporter it is easy to be engulfed by emotions and lose sight of the big picture. But this is an event that Eritrean Diaspora can be proud to have participated in the manner and ferocity that they have.

At a time when the world is divided, when across the globe nationalism is overtaken by individualism and, when big money has taken over; for new comers, particularly cyclists from Africa with little or no support; it is difficult to compete successfully. Eritreans however, have established a new trend.

Cyclists from less developed nations lack the institutional structures and resources necessary to compete at the level of UCI World Championships. Years of experience, millions of dollars and unprecedented levels of material as well as human resources are required to participate in these events.

For example team France is staffed by thousands of professionals and millions are spent for technical and logistical expenses. In addition the sponsorship dollars involved is significant. Compare that to team Eritrea that is only staffed by 7 and with limited resources.

While the above challenges could prove difficult to overcome, Eritreans proved to the world that Africans can compete on a world stage successfully. This is also an achievement for blacks worldwide that have limited representation on this sport.

Why are Eritreans succeeding in a sport that is traditionally dominated by the West and when they are facing many challenges?

Eritrean cyclists and the people of Eritrea found ways to flip the traditional approach and created a path that works. This is a unique path that the rest of Africa can take to heart and replicate. The success that was demonstrated in Richmond is a result of the collective effort of the people of Eritrea that have learned how to collectively lift each other by creating platforms used as steppingstones onto the next higher stages. Recent athletic victories including, Daniel Teclehaimanot in tour De-France, Ghirmai Ghebreselassie at 2015 IAAF World Championship competition in Beijing, the youngest and first ever gold for Eritrea are among the highlights.

These happens because of the determination of the government and people of Eritrea that instill the can do attitude and empower them with the mindset of self-reliance. Eritreans have the experience of making-do with whatever they have while marching to success. These are dedicated, selfless and committed individuals willing to do whatever it takes to succeed.

But what makes the Richmond UCI event more special is because it represents something more significant. For over seventy years, Eritreans have been forced to face successive US administrations that challenged the existence of Eritrea. One can convincingly claim that the US never embraced the ambitions and aspirations of the people of Eritrea. Over the last 17years especially, US attempts to nullify, suppress Eritrean identity was unprecedented.

Eritrean Americans in the Diaspora faced tremendous scrutiny by the Bush and Obama administrations. All attempts were made to discourage Eritreans from supporting their people and government. The reality however, these attempts strengthen the resolve of the people. The unmatched presence, the unique affection and support Eritreans showed their cycling team is therefore, an example that no one can put down the people of Eritrea. One Eritrean man said,

“Eritreans are like smoke or potato. Smoke always finds a way-out and if you bury a potato it grows in numbers. That is what Eritreans are, unstoppable.”

For the first time in over 17 years, Americans were able to see and enjoy Eritreans unfiltered away from the barrage of propaganda that is designed to demonize Eritrea. Governor Terry McAuliffe shook hands with Eritreans as he observed the event. Editors of black newspapers expressed their solidarity and pride in the fact that blacks were represented gloriously. The participants that came from all around the world for the competition were enamored with the passion displayed by Eritreans and many posed for pictures sharing the Eritrean flag. The manner in which Eritreans participated was the biggest surprise of the event.

Eritrean cycling team participation in the UCI event was a gift and a boost for Eritreans in the diaspora on many levels. In light of the fact that Eritrea has been in the spotlight for youth flight and fabricated maligning, it represented a welcome relief.

Eritreans have been trying to promote their nation but the battery of bad news and the constant unwarranted travel warning by the State Department was a serious impediment Americans that like to travel Eritrea. These warning were designed to deter Americans and isolate Eritrea. The reality however, Eritrea is a nation that has tremendous historic connection to the US and amongst the safest places in the world to visit.

The cycling event was the kick that opened the doors wide open so Eritrean flag can march right into the heart of America’s power center, Richmond. In one weekend the whole cycling world was exposed to the people of Eritrea. The UCI event was covered by over 500 media outlets and streamed live to be seen by over 300million worldwide and through the entire road-course and the finish-line Eritreans waving flags were visible in large numbers, soft power at its best.

The vast number of Eritrean participants aroused the curiosity of many that asked questions about Eritrea. The fact that Governor McAuliffe witnessed large number of Eritreans in one event will serve as a reminder, that the people that supported him to power are united and one. And, that he can count on them on his next endeavor. One of the things that he promised when he was running for office was to establish trade relations between Virginia and Eritrea. Hope that he fulfills his promise.

The event was a reminder to all Eritreans that time and patience will reveal truth and that people are more powerful and successful when united. It is reminder to vast number of Eritrean Diaspora that stood with the government and the people of Eritrea since the days of liberation struggle what their reward looks like.

The UCI event was a moment where parents were able to bring their children to witness fellow Eritreans compete on a world stage and instill pride in them. It is a lesson for the youth that determination, dedication and hard work always pay off. It was an opportunity to experience Eritrean role models with love and for a purpose. And to witness the level of admiration, love and affection the diaspora youth displayed towards the team was proof that they are-in and that a lasting legacy is cemented. It also brought the families closer in purpose.

At the heart, the main message out of all these is that Eritrea’s trajectories are unbendable. During the farewell party in Sheraton Arlington, Virginia, Tesfai Mehary (Fhira) sung his famous song from the days of the armed struggle, Ketematat Koynu Measkerna. This song was popular when battles raged all over Eritrea and the EPLF was taking city over city in victory which means that “cities have become our garrisons.” This time however, Fihira was singing that Richmond is another conquest, as was Beijing…

Eritrea’s cycling achievement is proof that it is not hardware, money and global position of power that propels nations to victory and determines winners. It is grit, determination; it is the heart and unwavering united vision. That is what represents Eritrea!

This is a hopeful beginning towards new era of US Eritrea relations. And Eritreans managed to take full advantage by exposing the American public the true nature of Eritrea. Hence, let this be a building block.

Eritreans in the Diaspora deserve tremendous praise for their commitment, love, dedication and hard work. Eritrean community in Richmond deserves thanks you for all the hard work to organize this sophisticated endeavor. They came through.

Most importantly, thanks to Coach Samson Solomon. His message, “keep supporting us.” Mechanic Biniam Asmelash for outstanding work while under tremendous pressure. And the leader of the team, Tagdalay Asmerom Habtemariam who said that, Eritrea has a lot in the pipeline and we are not satisfied by participating we want to compete and win. He also said he is very happy with the patriotism and warm reception he received.