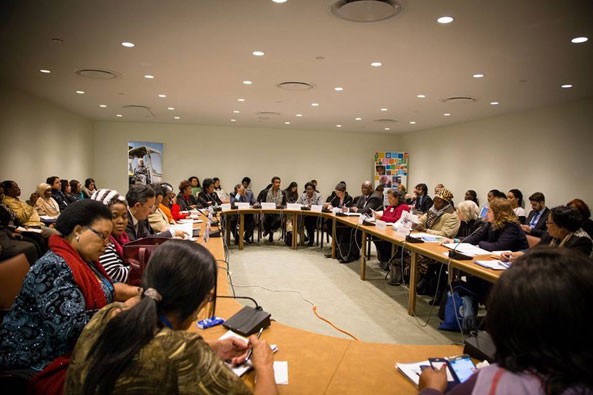 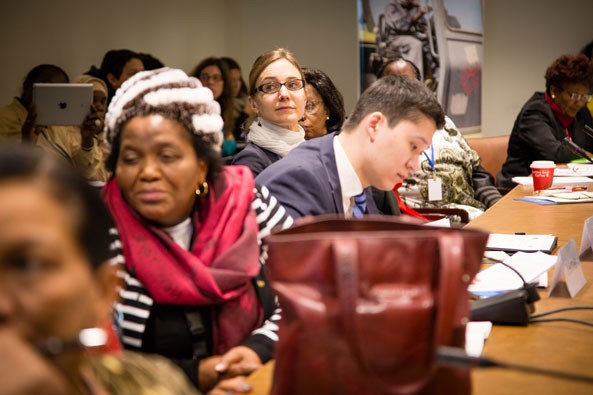 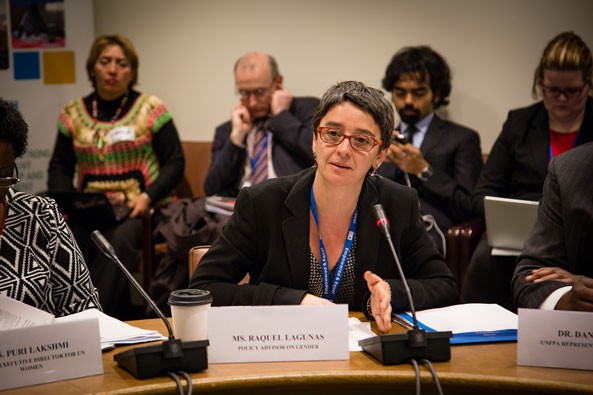 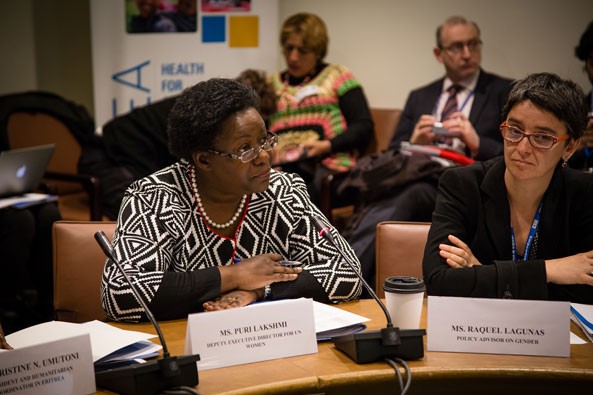 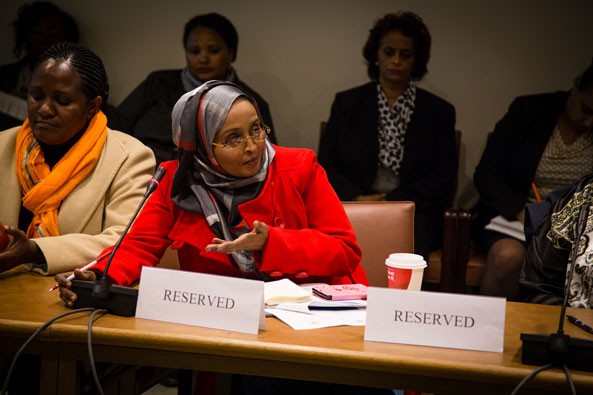 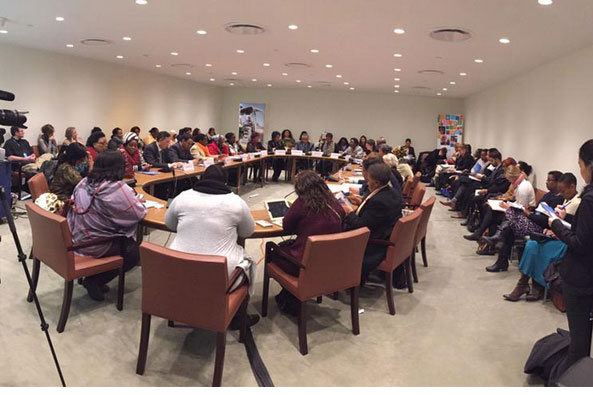 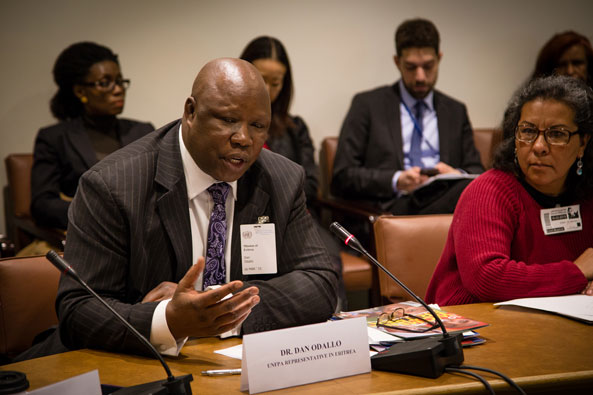 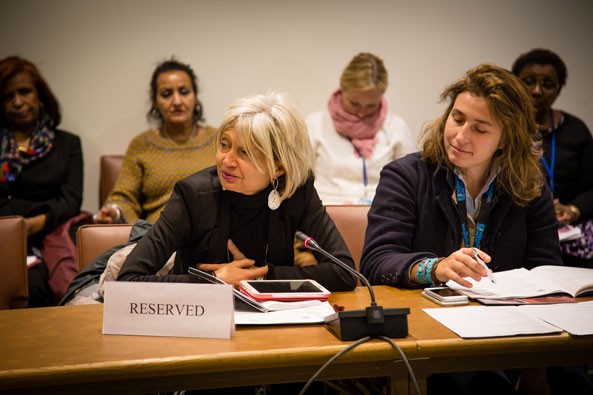 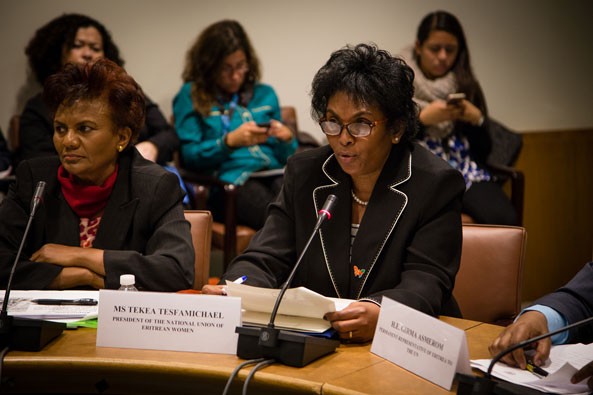 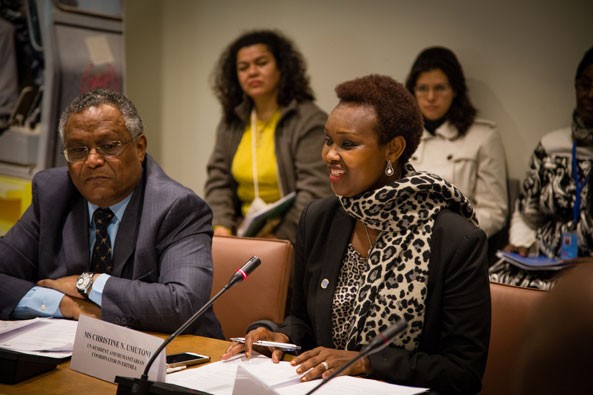 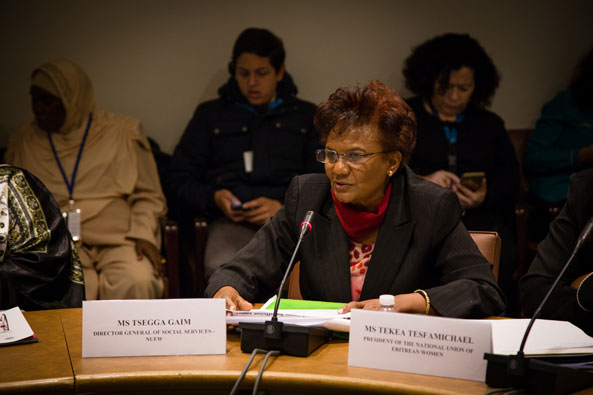 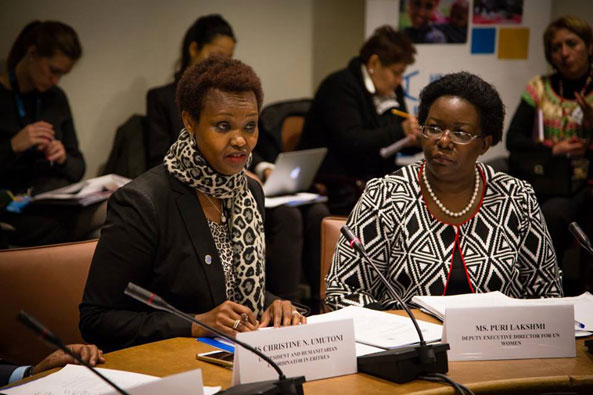 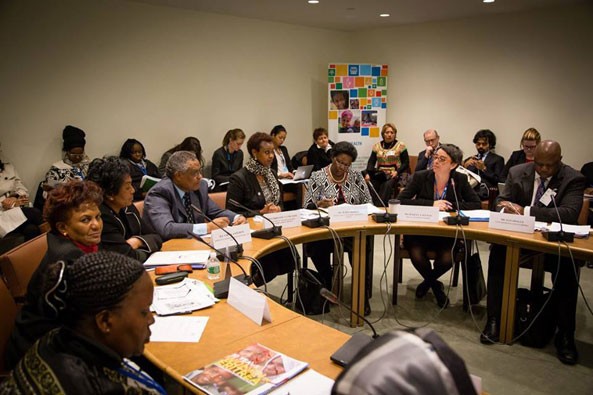 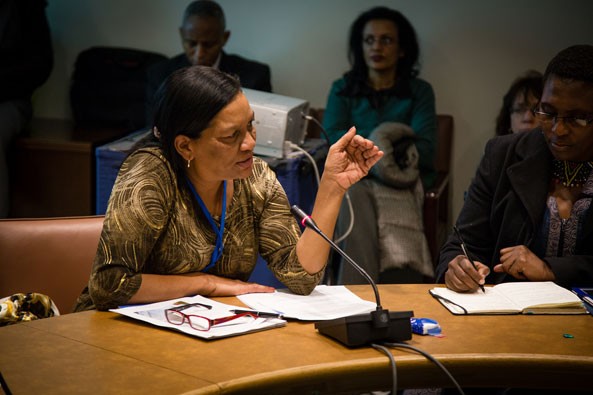 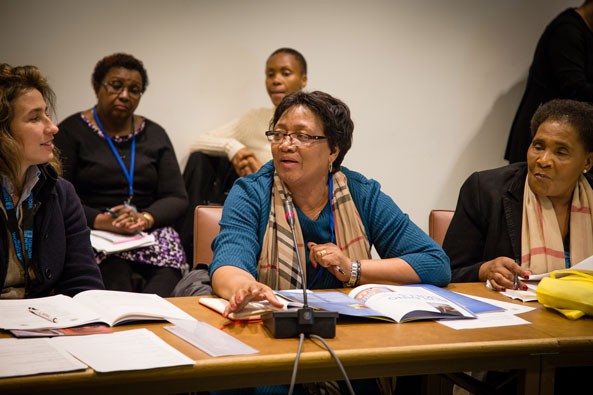 By Eritrean Permanent Mission to the UN,

A SIDE-EVENT was co-organized by the Permanent Mission of Eritrea and the United Nations Country Team under the theme “Empowering Women: Eritrea’s Achievements and Experience” during the 59th Session of the Commission on Status of Women in New York on the 16 March 2015, with a full house participation of representatives of states, UN Agencies and civil society organizations.

In his opening remarks the co-moderator, Ambassador Girma Asmerom, Permanent Representative of Eritrea to the United Nations, underlined the contextual premise to understanding Eritrea must be based on its strategic location, abundant natural resources, and the “yes I/we can do it” mindset and harmony of its 50% Christian and 50% Muslim population.

The co-moderator, Ms. Christine Umutoni, UN Resident Coordinator, summarized that the UN witnessed Eritrea’s ability to “do for more with less”. Ms. Umutoni also emphasized her assessment that when compared to many other civil society organizations from her vast experiences, the National Union of Eritrean Women is one of the most effective community movements with a high level of accountability and efficiency.

Speaking on the occasion, the keynote speaker, Ms. Tekea Tesfamichael, the President of the National Union of Eritrean Women, stressed the fact that the Eritrean women earned their rightful place in the society through active participation and contribution to the struggle for national independence and nation-building efforts.

She noted that the Union has been studiously working over the past two decades of independence to ensure the socio-cultural, economic and political empowerment of women through various innovative projects and gender mainstreaming in government institutions. She appealed to the participants to urge Ethiopia to withdraw from sovereign Eritrean territory, including the town of Badme, and the UN Security Council to lift the unjustified sanctions that are negatively affecting women andChildren.

The guest speaker, Ms. Christine Musisi, Regional Director of the UN Women, applauded the progress made in status of women in Eritrea through initiatives such as land ownership legislation for women, ensuring education of girls,especially among the nomadic population, the criminalization of Female Genital Mutilation (FGM) as well as the successful multi-sectorial approach on addressing gender equality.

Ms. Raquel Lagunas, UNDP Policy Advisor on Gender, emphasized UNDP’s commitment to increase and expand its partnership with NUEW. She stated that the vast membership of NUEW and its effective implementation of programs give it full legitimacy to be the lead organization on gender equality issues. She commended the grass-roots and community approach and legislative process that took place when the FGM was criminalized in 2007.

She stated that countries, like Eritrea, which give emphasis to ensuring gender equality, will succeed in their poverty eradication development efforts. In conclusion, she said, “what Eritrea is doing is not only the right thing to do but the smart thing to do”.

Ms. Tsegga Gaim, Director General of NUEW, expounded in detail Eritrea’s experience in the empowerment of women. In her presentation, Ms. Tsegga, stated that the empowerment of women in economic, health, education, decision making was the result of innovative and incentive oriented projects implemented by the Union, other stake holders, and partners. She stressed that the NUEW, a grass-root civil society organization with 300,444 membership, is playing important role in transforming all sectors of the society. She also underlined the strong political commitment and leadership of the Eritrean government to gender equality.

Dr. Dan Odallo, UNFP Representative in Eritrea, elaborating on the experience of development partners in the country, said “Eritrea’s success is attributed to the partnership between the government, UN Team and the NUEW that is based on clearly defined objectives and outcomes as well as vision.” He further stated having worked in many countries, in his experience, “Eritrea stands number one in effective community participation.”

Dr. Odallo stressed that once a project is approved and funds are allocated, it is normal for the partners and the beneficiaries to relax and reap the fruits of their efforts. Accountability is not a problem in Eritrea. He further noted that Eritrea should be rewarded for the validated achievements and not punished.

During the question and answer session, representatives from Kenya, South Africa, Somalia, Cameroon, Italy and other states and organizations commended Eritrea for its achievements in the empowerment of women. They further underlined Eritrea’s experience should be shared with and emulated by others.

The side event on the empowerment of women was the second side-event organized by the Permanent Mission of Eritrea and the UN Country Team. In September 2014, a side-event was organized to share Eritrea’s experiences in the successful achievement of the three (3) health related Millennium Development Goals (4, 5 and 6).