1) Despite profound poverty, Eritrea is expected to achieve the Millennium Development Goals (MDGs) in health in general and in child health in particular. Areas of achievement include: infant and child mortality rates; immunisation coverage; malaria mortality and morbidity; and HIV prevalence.

2) Eritreans’ commitment, both at home and abroad, to the development of health and education is led by the government, which at the same time retains tight control of programmes and policies.
3) Out of necessity, Eritreans’ experience in adapting to adverse circumstances has given them the capacity to develop innovative multi-sectoral approaches to health. In addition, community involvement has enabled improved health-seeking behaviours as well as widespread buy-in.
Summary Nonetheless, Eritrea is one of the few countries expected to achieve the MDGs in health, in child health in particular. Infant and child mortality rates have reduced dramatically; immunisation coverage has rocketed; malaria mortality and morbidity have plummeted; and HIV prevalence has almost halved in a very short period.

This can be attributed to the high prioritisation of health and education and a strong commitment to development among Eritreans, as well as to innovative multi-sectoral approaches to health. Finally, in spite of highly centralised control and relative political isolation, government commitment and ownership have played a key role in successful health outcomes.

What has been achieved?

Eritrea is a country facing significant development challenges. Its political system remains largely closed and basic human freedoms are by no means secure.1 Eritrea has, nevertheless, achieved remarkable progress in key health indicators, progress which has also generally been distributed equitably within society. Progress in other sectors, e.g. water and sanitation and education, has also contributed to improved health outcomes. It is important to note that, owing to the relative isolation of Eritrea, information and resources are not only extremely limited but also particularly politicised and polarised. Additionally, what exists is extremely patchy, hence the varying data periods found in Table 1.

A key factor in this is the remarkable improvement in immunisation coverage, which has also been distributed equally across income quintiles (Figure 1). Impressive results have been achieved in rural areas, where the number of children vaccinated against measles almost doubled in seven years, from 40.7% to 78.5%, with the rural-urban gap reducing by 67%.

Figure 1: One-year-old children immunised against measles by income quintile, 1995 and 20023 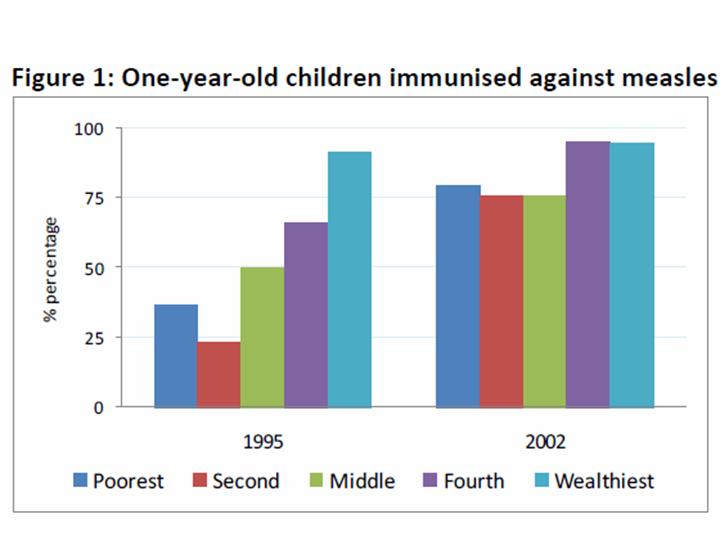 Maternal mortality dropped by more than half from 1995 to 2002, although the figure is still high. There has also been increased use of antenatal care (ANC) and birth attendance by skilled staff. The gap between bottom and top quintiles reduced for ANC but increased for birth attendance, even though the lowest quintile improved by 46% during the period – compared with 19% for the richest women.

Infrastructure, particularly in rural areas, has expanded. However, the sector still suffers from a serious shortage of skilled personnel, with the number of physicians increasing from only 0.2 in 1993 to 0.5 in 2004 per 1000 population.

What has driven change?

Capacity to adapt to adverse circumstances

A focus on self-reliance, particularly during years of war, has helped Eritreans be flexible when facing adverse circumstances and has led to the development of innovative solutions in the health sector. Examples are mobile clinics to reach remote populations in contested areas and the tackling of personnel shortages by training community members and teachers as health workers.

Eritrea’s leadership used the strife with Ethiopia to develop a sense of nationhood, regardless of ethnicity or religion. During the war, the Eritrean People’s Liberation Front (EPLF) deemed health and education essential investments in the country’s future after independence, with children a top priority. Programmes have survived in spite of protracted war, drought, famine and a general lack of resources. For example, in line with the stance of self-reliance, and despite its relative isolation, Eritrea has increased its number of skilled health professionals by setting up training colleges and schools.

The role of the diaspora

The Eritrean diaspora has played a significant role, throughout the war and during reconstruction, financially6 and politically but also through skills transfers (e.g. provision of medical care, training of colleagues and barefoot doctors during the war). Many returned to Eritrea to join the war; others returned after independence to contribute to reconstruction. Despite mixed global perceptions of Eritrea’s political situation, diaspora groups play a role in promoting and facilitating collaboration and partnerships between the Ministry of Health and medical organisations, universities, non-governmental organisations and doctors from other countries.

Ownership of policies and partnerships with donors

In spite of Eritrea’s rhetoric of self-reliance and a long-lasting controversial relationship with the international community, aid accounts for around one-quarter of the country’s gross domestic product and has been instrumental in improvements in health (up to two-thirds of public health spending depends on donor assistance). While remaining strongly committed to principles of national ownership, the government partners with the donor community on issues that align with its own priorities. Such partnerships not only bring in much-needed resources but also help sustain progress made in health. One example is the government’s partnership with the UN Children’s Fund to deliver the widely successful immunisation campaign.

Close coordination between the health and education sectors during the war was formalised after independence in the inter-sectoral School, Health and Nutrition Project which, from kindergarten to secondary school, addresses the specific needs of children and youth.7 The government realised that the only institutions throughout the country that could reach even the most remote areas were schools and teachers. Using these as a mechanism to implement health interventions, the government trained teachers as health workers. Tasks include regular monitoring and screening of students for basic health problems, as well as lecturing on health education (nutrition, hygiene, HIV and AIDS prevention and life skills).

The government recognises the involvement of communities in rural areas as an effective and affordable way of preventing disease and promoting primary health care. Communities have been trained and awareness has been raised, resulting in improved health-seeking behaviours and in health services being brought closer to the community. For example, community involvement in successful immunisation campaigns, which are entry points for maternal and child health interventions, has been critical in improving uptake of services and reducing dropout.8 Other interventions include Community Integrated Management of Childhood Illness and Community-Based Therapeutic Feeding, as well as the National Malaria Control Programme and the HIV and AIDS Programme.

A strong government, with the ability to motivate and mobilise people behind a clear goal, emerges as key to progress in Eritrea, despite accusations of authoritarianism and political repression. The EPLF has managed to generate a unique sense of community among a diverse group of ethnicities and religions. Involvement of the diaspora is closely linked with the idea of unity for the greater good.

Investment in human capital as a key driver of development has been of vital importance. The government foresaw future needs and made long-term investments in health and education, although this has as yet not stemmed widespread poverty.

Government ownership of development projects and programmes is important to ensure sustainability and commitment to goals, as well as to avoid unpredictable shifts in donor priorities and/or financial commitments. However, less political isolation might also promote progress in areas such as economic growth, where the country has not been so successful.

A strong understanding and down-to-earth assessment of the resources available to foster development encourages both realistic actions and common-sense policies. Meanwhile, if fewer resources had been devoted to defence and war, progress in other sectors might also have been visible.

Effective coordination among sectors avoids duplication of efforts and allows for cost-effective projects. In the Eritrean health sector, what might have constituted rivalry between ministries has been transformed into opportunities to scale up services more efficiently.

Community participation and involvement in health service delivery, besides helping alleviate shortages of skilled staff, has brought services closer to the community. This has also had an important impact on awareness at community level and, as such, has removed barriers to the dissemination of health information. Additionally, it has reinforced a sense of belonging and of contributing towards the common good.

ODI holds the copyright for all ODI publications, which are subject to UK copyright law. ODI welcomes requests for permission to reproduce and disseminate its work, as long as they are not being sold commercially. As copyright holder, ODI requests due acknowledgement and a copy of the publication.

Two-thirds of Eritrea’s population lives below the national poverty line, and the vast majority in rural areas. The rugged topography and harsh climate, coupled with the 30-year war of independence, have led to widespread economic hardship and food insecurity. The government maintains a policy of economic autarky, while restricting free enterprise and tightening its control over both the economy and society in general – an approach that has led to accusations of authoritarian and even dictatorial rule.