I took all of the photographs on this page in 2016 and 2017. They are a handful of hundreds of photographs I took there during my four years in Ethiopia as a professor.

Don’t get me wrong, though. Ethiopia is a beautiful country, with amazing natural beauty and historical and archaeological sites, and so many wonderful people. I will share my photos of some of these on a happier post.

But wherever people live, extensive areas of poverty are evident, especially in rural areas, where over 80% of Ethiopians live. Even in its capital city, Addis Ababa, poverty abounds, but much of it is hidden from sight by tall trees, and fancy hotels and malls, close to where the poor and homeless beg on the streets, hoping for donations from the few who can afford to frequent those hotels and malls.

You will see in the news, and officials of the oppressive Ethiopian government will smile convincingly when they tell you that Ethiopia is thriving with a “double-digit” economic growth.

Yet many experts and scholars will explain to you why this claim to double-digit growth is really triple-digit nonsense and quadruple-digit propaganda.

Below are some articles worth reading such as the one written by Professor Alemayehu Mariam, a human rights lawyer and professor at the University of California at San Bernadino, whose knowledge, scholarly opinions and analyses can be relied upon.

Truth is the best friend of Freedom

The above quote is taken from Global Multidimensional Poverty Index 2017, a report of the Oxford Poverty and Human Development Initiative (OPHI).

In fact, of 103 developing countries studied, Ethiopia ranks 101 out of 103 countries. It is the third poorest nation on Earth. Only two countries are poorer, by MPI score, than Ethiopia.

The global MPI is an index based on three “dimensions” of poverty: health, education and living standards, and on ten indications within these, including child mortality, access to nutrition, sanitation, quality drinking water, electricity, and more. You see, poverty isn’t simply about money. Some governments- including the Ethiopian government- will use indicators such as GDP per capita, but poverty is much more complex than that.

Poverty is about the quality of people’s lives, and how they struggle to survive on a daily basis. 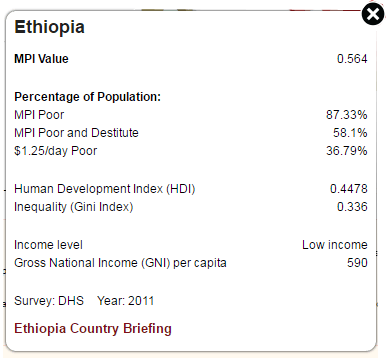 I lived and worked as a professor for four years in Ethiopia and the poverty made me weep with sadness on almost a daily basis. The government presents a rosy image of an “Ethiopian Renaissance,” supporting it with its falsified “double-digit growth,” but it is largely propaganda, and few people can speak out there because they are silenced by fear, oppression and proclamations that stifle free speech and human rights.

In Addis Ababa alone, estimates are that as many as 100,000 children, possibly even more, live on the streets. Add to that the homeless adults and families in Addis and elsewhere, and the number is not known, but it is staggering!

And we haven’t added yet the huge number of people who live on the edge, at risk of losing their basic security at a moment’s notice. When I lived in Ethiopia, I met many people who earned barely enough money to pay their rent and buy basic food, and I saw how precarious their lives were. Loss of a job, a serious illness or accident, loss of a working spouse, for example, can put someone onto the streets at a moment’s notice. In the countryside, as we speak, severe drought has put millions of poor Ethiopians at risk for famine.

Some people, including, myself, might even argue that we should add indices of freedom to the definition of poverty. After all, deprivation of ones right to freedom of speech and expression is surely a type of psychological poverty? If that were the case, Ethiopia might well fall to the very bottom of the list. Freedom House lists Ethiopia as “NOT FREE,” and even trending down in 2017.

If people have no freedom to speak out against poverty and its causes, to campaign for a better deal for the poor; if they have no voice because their mouths are glued shut by state oppression, they will be confined to the chains and shackles of poverty.

The wealthiest people in Ethiopia

There are wealthy people in Ethiopia, but there are many, many, many, many more poor people there.
A search on the internet will reveal various sites that name the richest Ethiopians. There are some minor differences, but here is one of them.

The richest person there is said to be businessman, Sheikh Mohammed Al Amoudi; he is worth about $11 billion. Of the others in the top ten wealthiest, according to the above and other sources, at least four are, or were, politicians, including the former First Lady, Azeb Mesfin (worth about $3 billion).

The government receives billions of dollars in foreign aid, and some of that helps corrupt politicians and government officials amass their wealth, while millions of precious citizens live in poverty or on the fence between poverty and very minimal security.

If you ask me, though, who are the wealthiest people in Ethiopia, I will tell you beyond doubt who they are, because when I lived there, I made a point of getting to know some of them. They are the homeless, and the poor who live on the borderline, many of them rich in humility, spirit and gentleness, who somehow manage to produce the best smiles you ever saw in your life.

And the poorest? The oppressive leaders who deny them their basic human rights, and silence those who want to speak out for them, through intimidation and proclamations that stifle human rights.