Hungry and Frightened: Famine in Ethiopia 2016

Millions of the poorest, most vulnerable people in Ethiopia are once again at risk of starvation. Elderly men and women, weak and desperate, wait for food and water; malnourished children lie dying; livestock, bones protruding, perish.

According to a statement issued by the World Food Programme (WFP) on 6th February, over 10 million of the most vulnerable require urgent humanitarian assistance. This figure was published in the Joint Government and Humanitarian Partners’ Document (HRD) in December last year, and does not take into account the 7.5 million people who annually receive support from Ethiopia’s Productive Safety Net Programme – PSNP, (established in 2005 to enable, “the rural poor facing chronic food insecurity to resist shocks, create assets and become food self- sufficient), taking the total in need to almost 18 million.

The worst affected areas, according to USAID, are the pastoral areas of Afar and Ogaden Region – where people rely totally on their livestock – and the agricultural lowlands of East and West Haraghe – close to the capital Addis Ababa.

The WFP explain that the level of humanitarian need in Ethiopia has “tripled since early 2015…caused by successive harvest failures and widespread livestock deaths. Acute malnutrition has risen sharply, and one quarter of Ethiopia’s districts are now officially classified as facing a nutrition crisis.”

With a shortage of food, families are forced to make children drop out of school to take up menial jobs to survive; such children, lacking a decent education, are unable to find well-paid jobs in adulthood, and so the spiral of exclusion, poverty and deprivation continues.

Ethiopia is a large country (385,925 sq. miles), with a population of just over 101 million (13th largest in the world), which is growing at a yearly rate of around 2.5% (over double the world-wide average). Conflicts resulting in migration from the neighbouring states of Sudan, South Sudan, and Eritrea has brought an influx of refugees and asylum seekers, which according to USAID amount to more than 733,000.

More than half the population live on less than $1 a day; over 80% of the population live in rural areas (where birth-rates are highest), and work in agriculture, the majority being smallholder farmers who rely on the crops they grow to feed themselves and their families. 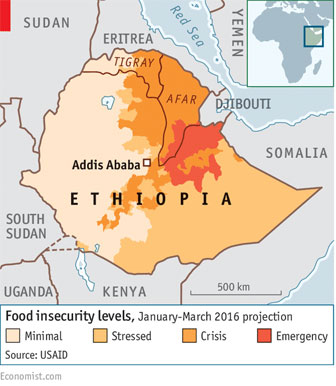 The people of Ethiopia have suffered chronic food insecurity for generations: the major reason, as is the case throughout the world, is poverty. Other causes are complex; some due to climate change, others result from the ruling regime’s policies.

The ruling regime, that appears to be more concerned with its international image than the suffering of those in need, has presented an ambiguous, contradictory picture of the famine.

In a recent interview Arkebe OQubay, the ‘special adviser to the Prime-Minister’ told Bloomberg that the countries greatest achievement since 1984, was that “we are being able to feed ourselves. In 1984 we were struggling to feed our 40 million-population, but now we have 95 million population and we have food security.” This is pure fantasy: Ethiopia (according to most recent, 2012 figures) remains the largest recipient of food aid in the world, and millions are today at risk of starvation.

Shortly after this claim from his ‘special adviser’, the Prime Minister himself, Hailemariam Desalegn appealed for help in supplying humanitarian aid to the millions in need, saying, ESAT News report; “it is the responsibility of the international community to intervene before things get out of hand.”

The EPRDF government owns most of the media inside the country, exerts tight controls on any marginally ‘independent’ publications and seeks to restrict and condition reporting by international media. Interviewed by foreign news agencies, officials smugly reject claims of widespread human rights violations and paint themselves as a democratic government bringing economic prosperity, opportunity and stability to the country: A fabricated image, far from the truth.

With the government more or less controlling the flow of news about the situation in the drought-hit areas, detailed, open and honest information is hard to come by. The sole independent Ethiopian broadcaster ESAT News, which has reliable contacts in the country, carries the account of an aid worker who recently spent time in the worst affected regions – Afar in the North East and Ogaden in the South East. He reports that, “the famine was already taking its toll on humans and livestock………[and] that the situation in places near Jijiga and Shinile in Somali [or Ogaden] region was very serious.” He saw, children whose skins were fused with their bones at feeding centers in the regions,” and at a health center in Afdem (in central east part of the Ogaden), met “hunger stricken bony children.”

The government proudly boasts that the Ethiopian economy has been growing, by between 7% and 8% (UK GOV figures) for almost a decade, that malnutrition and famine are no longer possible and that within a decade Ethiopia will be a middle ranking power. Nevertheless Ethiopia finds itself ranked 174th out of 188 countries in the UN Human Development Index (inequality adjusted). This suggests that whatever ‘growth’ the country has achieved, it has not changed the lives of the majority of Ethiopians, and, as is evidenced by the millions suffering from hunger and malnutrition, has clearly not eradicated food insecurity – which should be the first priority of the government.

The scale of the current crisis has led the UNOHCA to call for $1.4 billion of funding to supply emergency food and water, to ‘in excess of 15 million’ people. So far donors have been slow to come forward, prompting Save the Children’s Ethiopia Director to describe the reaction as “the worst international response to a drought that he has seen.”

Around 45% of the total has been donated, including $200 million from the ruling regime. However the United Nations World Food Programme (WFP) says it has less than a third of the money it needs to keep the aid coming.

America has offered some small-scale additional support, sending, CNN reports, “20 disaster experts to provide technical assistance, conduct humanitarian assessments and coordinate relief efforts with partners on the ground,” as well as “$4 million in maize and wheat seed for more than 226,000 households.”  This level of assistance, whilst welcome, is nowhere near enough, and it seems the motive is far from pure.

“Climate-related threats pose an urgent and growing threat to our national security, contributing to increased natural disasters, refugee flows and potential conflicts over basic resources like food and water,” said USAID spokesman Ben Edwards. It seems the US is concerned about ‘stability’ in Ethiopia and the wider region, not human welfare; fearing that a lack of food and work may drive young people into the hands of extremist groups, and encourage migration, adding to the huge refugee flows.

The UNOCHA estimates the total current cost of worldwide humanitarian demand to be $21 billion. With Syria on fire, a huge refugee crisis in Europe, urgent demand in Yemen, Afghanistan and Iraq, in addition to ongoing international development commitments (including Ethiopia), donor nation resources (and attention) is turned elsewhere.

The Need for Sharing

It is the poor who die of hunger related causes throughout the world; it is the poorest people in rural Ethiopia – who constitute some of the poorest people on Earth – who are currently at risk. Every day 35,000 children in the world die of starvation and its attendant causes, but we live in a world of plenty; there is no need for a single man, woman, or child, – in Ethiopia or anywhere else, to die because they do not have enough food or water to survive. Oxfam report that, the world now “produces 17% more food per person today than 30 years ago. But close to a billion people go to sleep hungry every night.” And they all live, more or less, in seven countries: India, China, Ethiopia, the Democratic Republic of Congo, Bangladesh, Indonesia, and Pakistan.

Food, like water, shelter, access to education and health-care is a human right, and is enshrined as such in the Universal Declaration of Human Rights. Like all natural resources it should be shared equitably amongst the people of the world, so that nobody, anywhere – specifically the famine-affected regions of Ethiopia, where so many are once again in dire need – experiences food-insecurity and dies of hunger.

Graham Peebles is director of the Create Trust. He can be reached at: [email protected]