Eritrea brokered peace and reconciliation agreement signed in Asmara today between the government of Ethiopia and the Oromo Liberation Front (OLF).

The deal reached between President of the Oromia Region Lemma Megersa and OLF Chairman Dawd Ibsa provides for termination of hostilities.

The government has now signed a reconciliation agreement to end hostilities with the OLF’s exiled leader, Dawud Ibsa, who based in Asmara, said Eritrea’s Information Minister Yemane Gebremeskel.

“The agreement further states that … the OLF will conduct its political activities in Ethiopia through peaceful means, besides agreeing to establish a joint committee to implement the agreement,” he said on Twitter.

The deal appeared to be a boost for Prime Minister Abiy Ahmed, who is also an Oromo, for his reform agenda and improving the country’s security.

The OLF group declared a unilateral ceasefire last month after parliament removed it from a list of banned terrorist groups that it had been part of since 2008.

Since the 1970s, the OLF rebels have fought a low-level insurgency for self-determination for the Oromia region, which is Ethiopia’s largest and home to the Oromo ethnic group.

Now that the Eritrean government has normalized its relations with the new Ethiopian government led by PM Abiy Ahmed, it started to guarantee the safe return of all Eritrea based Ethiopian rebel groups back to their country and be part of the ongoing reform and democratic change. 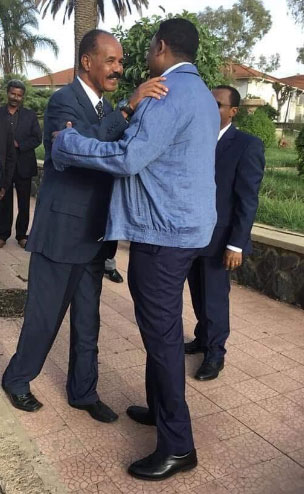 The meeting that was held on 6 August at the State House was focused on the implementation of the Joint Declaration of Peace and Friendship that was signed on 9 July between Eritrea and Ethiopia.

The two sides also discussed the developments prevailing in the Horn of Africa.

The objective of the visit of the Ethiopian delegation was to discuss with the leaders of the Oromo Liberation Front (OLF).