Why Thousands of Ethiopians and Somalis Fleeing to War-torn Yemen

Refugees and migrants hoping to reach oil-rich Gulf countries — many of them teenagers — are increasingly traversing a dangerous sea route to Yemen, despite the conflict raging there.

The flow of migrants crossing a small sea passage from the Horn of Africa to Yemen, which has continued unabated for years, reached a record of over 117,000 migrants and asylum seekers in 2016 — up from around 100,000 the year before.

Officials believe the figure for 2017 will be even higher.

“A lot of people who hear about the route for the first time are quite surprised,” Olivia Headon, a press officer at the International Organization for Migration (IOM), told CNN. “They can’t imagine why anyone would go into Yemen during the grip of conflict. But some in Somalia aren’t aware of just how bad it is in Yemen.”

After two-and-a-half years of grinding civil war, Yemen is in the throes of a vicious cholera outbreak and a near famine, coalescing into one of the worst humanitarian crises on the planet.

But economic and environmental factors in Somalia and Ethiopia, where most of the migrants come from, have left young people feeling there is no future for them at home.

Youth unemployment is extremely high in parts of Somalia and the country is also experiencing a severe drought that is fueling fears of famine. This spring, Somali President Mohamed Abdullahi Farmajo declared the drought a national disaster. 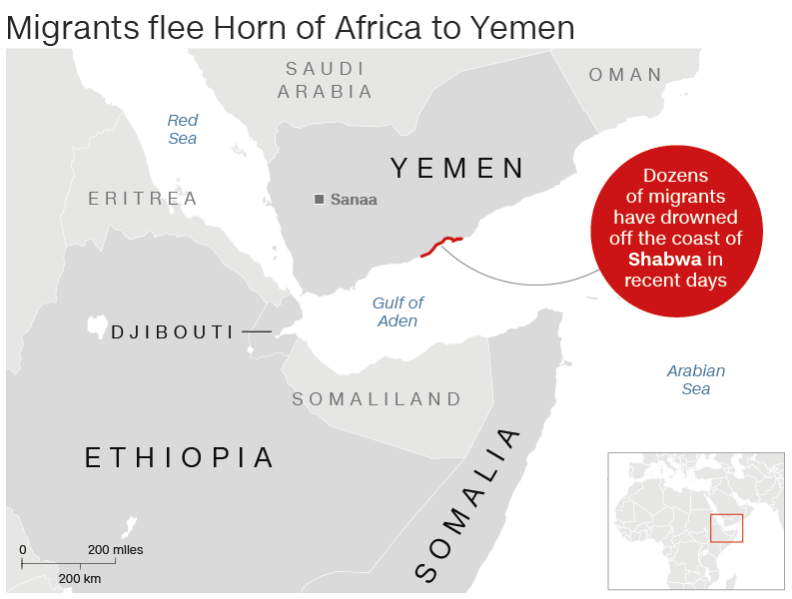 Ethiopians are also facing acute hunger, with the UN saying at least 8.5 million people in the country are in need of immediate food assistance.

Most of the migrants hope to eventually make their way through Yemen to find jobs in Gulf countries, like Saudi Arabia, Oman, and Dubai.

“You have smugglers who are selling an idea, a dream. We see it on other routes as well. Even if you are aware of the dangers of the route, as a migrant you buy into the idea, the dream of finding a job there,” Headon added.

Dangers of the Route

In the last two days, the United Nations migration agency has recorded two separate instances of smugglers forcing migrants off of boats and into the sea, leaving them to drown.

Up to 50 refugees and migrants from Somalia and Ethiopia were “deliberately drowned” when they were thrown from a boat off the coast of Yemen, survivors told IOM. The average age of the passengers on board was around 16, according to the group.

“The survivors told our colleagues on the beach that the smuggler pushed them to the sea when he saw some ‘authority types’ near the coast,” Laurent de Boeck, the IOM’s chief of mission in Yemen, said. “They also told us that the smuggler has already returned to Somalia to continue his business and pick up more migrants to bring to Yemen on the same route.” 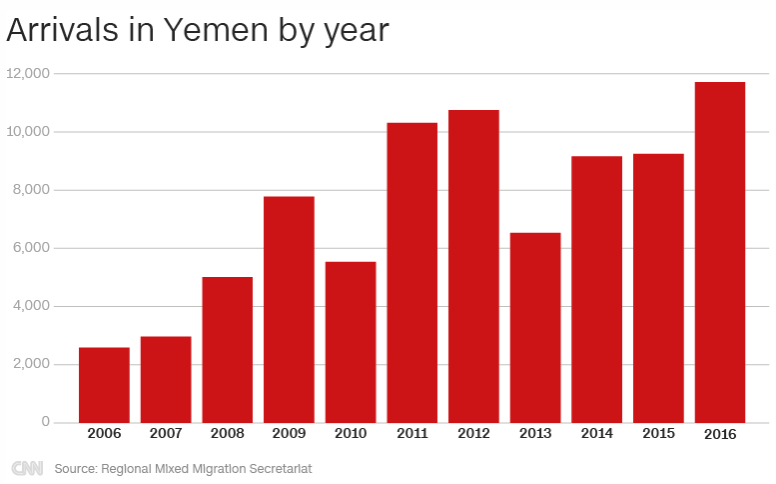 Twenty-nine of the migrants were found buried in graves on a beach in Shabwa by IOM staff on Wednesday.
“The bodies were buried in shallow graves by the survivors,” Headon said. “You can’t imagine the psychological effects that has on children and teens.”

Children as young as 12 have been seen traversing the migrant route, Headon added.

On Thursday, IOM reported that another smuggler forced some 160 people from a second boat, this time closer to shore.

IOM staff found the remains of at least six bodies on a beach in the same area, and 25 people were receiving urgent medical attention. Some 13 people were still missing, and 100 others had entered into Yemen.

‘False hope of a better future’

IOM estimates that around 55,000 migrants have left the Horn of Africa to come to Yemen this year alone, with most from Somalia and Ethiopia. More than 30,000 of those were under 18. A third are estimated to be female.

While the route isn’t new, smugglers working in the Red Sea and the Gulf of Aden have taken advantage of the instability in Yemen. And without a centralized authority in Yemen, there is no one to stop them from traveling onward through the war-torn country.

But most get caught in the conflict before reaching the promises of jobs in the Gulf, Headon says.

UNHCR data shows that the number of migrants, refugees and asylum seekers arriving in Yemen has steadily climbed over the last 10 years — doubling from 2006, when 25,898 arrivals were recorded, to 2008, when 50,091 people reportedly arrived, and then again in 2015, when nearly 100,000 people landed on Yemen’s shores.

Cheaper than the Mediterranean Route

Part of the rise in migration to Yemen is down to cost, Headon explains. The route is significantly more affordable than the West Africa route through Libya and onto Europe.

“The costs of paying a smuggler to go to Yemen can be as little as 100 dollars, which is far less than what we see up through Africa to Libya and on to Europe,” which is around $5,000, Headon says. “People pay this small amount of money, which is actually affordable for them, but on the journey the smugglers rape, torture, and abuse them. Many record this on Facebook, and FaceTime, to force families to pay more money as a sort of ransom.”

She says in some cases the cost can go up to an additional $1,000 — still far below the West African route.

Many of the migrants who arrive in Yemen after being sold on fake promises end up returning home.

Each week, IOM and its partners in the region help to evacuate people from Yemen to Djibouti and back to their home countries.

“The suffering of migrants on this migration route is enormous,” Laurent de Boeck, the IOM Yemen Chief of Mission, said in a statement. “Too many young people pay smugglers with the false hope of a better future.”