Diplomatic Row Reportedly Breaks out Between South Sudan and Ethiopia

An extraordinary diplomatic row has broken out between Ethiopia and the neighbouring South Sudan over rumours that President Salva Kiir has tacitly agreed to allow Ethiopian rebel groups to open an office in the nation’s capital Juba.

During his recent visit to Egypt, president of the new born nation Salva Kiir has tacitly agreed with Egyptian officials to allow his soil to Ethiopian rebel groups to operate, a senior official whom Radio Tamazuj spoke to affirmed today, with out disclosing the specific names of the rebel groups.

According to the senior official who spoke to the Sudanese radio on conditions of anonymity, Egyptian officials have also shown their interest in supporting the rebel groups with finance and military logistics with an intent to harm the government of Ethiopia to halt the construction of Ethiopia’s Grand Renaissance Dam.

However officials of South Sudan have denied the allegation accusing their SPLM-IO faction, which is said to be allied to former First Vice President Riek Machar of circulating the “unfounded” rumour to creat diplomatic row with Ethiopia.

The radio has qouted the South Sudan official as saying “The rebels are now took advantage of that, and this information has already convinced the government of Ethiopia,” he said. 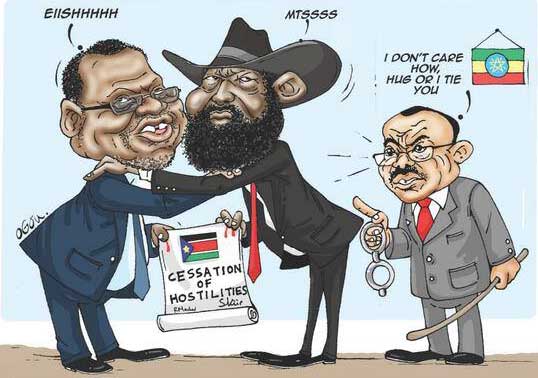 “Even if there are differences between us, Ethiopia cannot expel our ambassador, as he is not only an ambassador of South Sudan to Ethiopia but also our nation’s representative at the African Union” the South Sudan official has said adding that his government will soon issue an official statement on the matter.

An official who is said to be a close aide of South Sudanese information minister Michael Makuei on his part told Nyamilepedia, an online media outlet based in Juba, that his government was not afraid of Ethiopia and that the country had nothing to explain, adding that the country would press on with its strategic relations with Egypt.