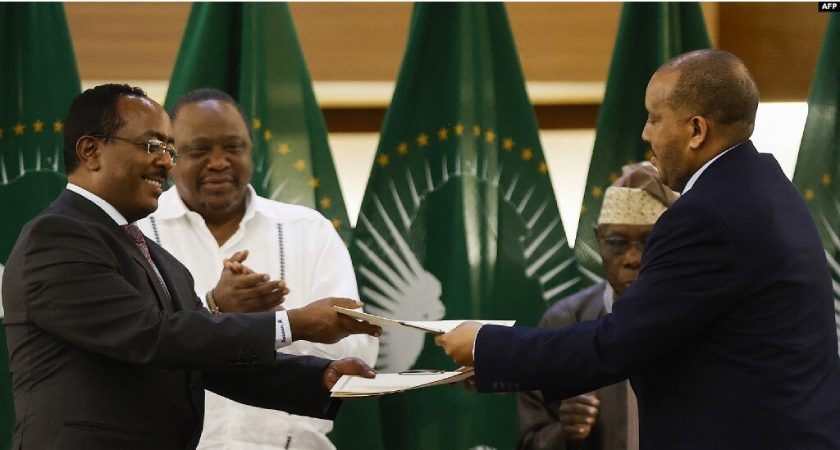 The warring sides in the brutal two-year conflict in Ethiopia’s Tigray have agreed to a truce, the African Union’s mediator said Wednesday following marathon talks in South Africa.

“The two parties in the Ethiopian conflict have formally agreed to the cessation of hostilities as well as the systematic, orderly, smooth and coordinated disarmament,” the African Union’s special broker, former Nigerian president Olusegun Obasanjo, said.

The agreement marked a new “dawn” for Ethiopia, he said, speaking at a news conference.

Tigray’s rebels hailed the deal and said they had made “concessions.”

“We are ready to implement and expedite this agreement,” said the head of their delegation, Getachew Reda.

“In order to address the pains of our people, we have made concessions because we have to build trust.”

“Ultimately, the fact that we have reached a point where we have now signed an agreement speaks volumes about the readiness on the part of the two sides to lay the past behind them to chart a new path of peace,” said Reda.

Congratulations #Ethiopia. A Cessation of Hostilities in northern Ethiopia🇪🇹 is an encouraging step. I commend all parties for their tireless efforts in the @_AfricanUnion-led talks. The 🇪🇺 stands ready to help translate this CoH into a lasting peace.

Ethiopian and Tigrayan negotiators went to Pretoria last week for peace discussions sponsored by the AU.

The talks were first set to end on October 30 but were extended to today.

The word of a truce came after Ethiopian Prime Minister Abiy Ahmed stated that “As we’re completing the war in the north with victory, we have to bring peace, development and ensure Ethiopia’s prosperity, so we make those forces that (cause) conflict among Ethiopians from afar feel shame.”

“If a victory found in war isn’t repeated in peace if the peace found through victory isn’t repeated with prosperity, Ethiopia’s existence/sovereignty will inevitably be violated one way or another,” said Abiy.

The Pretoria dialogue was launched in the face of rising international alarm over the resumption of combat in late August that ruptured a five-month truce.

Since the negotiations began, fierce fighting has continued in Tigray, where government troops backed by the Eritrean army and regional forces waged artillery bombardments and air strikes, capturing a string of towns from the rebels.

In an interview with Chinese state television broadcast on Monday, Abiy appeared to complain about foreign interference in the peace talks.

“Of course, if there are lots of interventions from left and right, it’s very difficult,” Abiy said. “Ethiopians should understand we can solve our own issues by ourselves.”

Abiy also confirmed that Ethiopian forces and their allies had taken control of the Tigrayan towns of Shire, Axum, and Adwa.

The international community has been pushing for a cessation of hostilities, humanitarian access to Tigray, and a withdrawal of Eritrean forces, whose return to the conflict has raised fears of renewed atrocities against civilians.