A new letter signed by 39 members of the European Union Parliament asks for a full inquiry into human rights violations in Ethiopia, while calling into question the accuracy and impartiality of a controversial report completed by the Ethiopian Human Rights Commission in April.

The letter to Federica Mogherini, High Representative of the EU for Foreign Affairs, notes Ethiopia’s steadfast refusal to permit an independent investigation into human rights violations since the 2016 protests began, primarily among the Oromo people.

“We believe that an independent investigation would shed light on the real number of casualties and the extent of the military pressure,” the MP letter issued on Friday said.

“The Ethiopian government must be held accountable for its human rights violations, and all those detained for exercising their legitimate freedom of expression must be released.”

In addition to specific concerns about systematic sexual violence committed against women and girls in the Oromo and Ogadeni communities, the letter recalls the detention of British citizen Andy Tsege, an Ethiopian rights activist facing a death sentence who was abducted and taken to Ethiopia in 2014.

“The European Union is a major partner for Ethiopia and among the most important donors of foreign aid to the country,” the letter concludes.

“As a leader on human rights in the world, the EU should more publicly share its concerns regarding the fulfillment by Ethiopia of its human rights obligations, and act accordingly.”

Ethiopia remains under a state of emergency following a four-month extension of the decision made last October immediately after the Irreecha Festival crisis.

The emergency declaration expires at the end of July unless the Ethiopian parliament approves another extension. 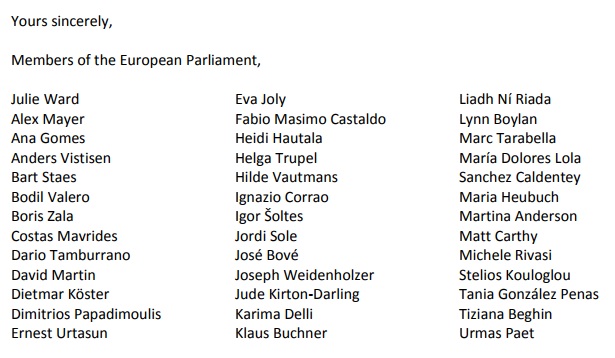