The Fate of Migrants

I was watching the standup comedy show of Trevor Noah the other day. In his show he talked about migration and the rise of xenophobia in the Western world and how it contradicts what those same countries did by conquering the world and colonizing populations.

When migration comes from the developing world to the west, panic, fear, and intolerance become the order of the day. Ironic isn’t it? Similarly, I started to think about the fate of migrants in Libya that everybody is talking about lately after the release of videos showing African migrants in chains being auctioned.

Many may think it is a new occurrence leading to rising outrage among individuals and I have noticed especially among the black and African communities. Members of the French Parliament also called for action leading to President Macron is call for a meeting at the Security Council. The African Union also officially condemned it. Many individuals on Facebook and Twitter are calling for demonstrations and express their discontent towards world leaders and so-called human rights folks for their lack of action.

However, the fate of African migrants in Libya is far from being a new trend. It has been going on for some time and the international community decided to turn a blind eye. It is kind of ironic that the world finally talks about it when the French president raised the issue although Egypt has been raising the matter already.

This modern day slavery and human trafficking were known already when NATO forces came to Libya to remove Col. Ghaddafi. The US, administration when Hillary Clinton was the Foreign Secretary, and the head of NATO were very well informed about what was going on but it was ignored.

The situation of African migrants in Libya brings the debate back to the unfortunate fate of migrants in today’s world who are at the mercy of human traffickers (an international business placed right after drug trafficking!) and tightened migration policies in the west.

Movement of people is a natural part of life and has existed for centuries. The Irish and the British, for instance, migrated to the United States to look for a better life. The Italians and the Spanish moved to Switzerland for work. British former prisoners were sent to Australia and became Australians. Colonizers moved around the globe to conquer and impose their rules and settled at the detriments of the indigenous populations. History yet seems to be quickly forgotten by those who used to be the migrants, i.e. the developed nations mainly in Europe and the US. Migrants are perceived as pariah, burden and threat in today’s world, which is reflected in global politics. 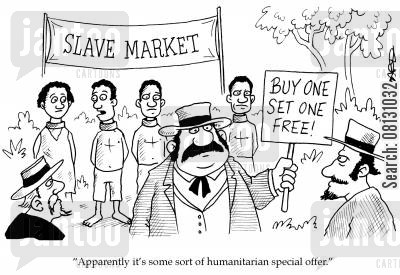 Rising xenophobic ideas influence policy makers and it is putting at risk the fate of humanity. Every time it is a different wave. We have seen the wave of refugees from Kosovo and other countries in the Balkans. European countries feared them. Those communities faced intolerance and difficulties to integrate. Now, those communities are mostly integrated, many pursued higher education and so on. Another wave then came, the Somalis, Afghans, and migrants from different African countries for whom it became harder to be accepted, to be given permit to stay and make a living. Institutionalized racism is on the rise and the story continues.

A world already divided will continue to split apart. The plan to build a wall on the Mexican-US border, banning visa for nationals of certain countries, tightening migration policies leading to detention of migrants on transit in Libya where the rights of migrants and of human beings in general are far from being respected.

Similarly refugees and migrants in Manus Island, fearing for their lives, are refusing to leave the camp. Rohingya people continue to be stateless and are living in bushes. Countries that are unstable as it is the case with Libya, are confining African migrants in cells and even selling them to clients from the West looking for free labor to work on their farm.

However, nobody seems to talk about it. Modern day slavery didn’t seem to shock politicians to an expected degree. Of course, migrants and refugees are and will continue to be seen as second-class citizens, and the darker the skin color is the more difficult it becomes for those migrants.

Events following the 9/11 terrorism attacks were and continue to put the attention on migration with more and more restrictive policies getting implemented. There are more restrictive policies today impacting the free movement of people and stricter conditions for visa applicants from less developed countries. Actually, I am always surprised to hear people telling me how difficult it is to apply for a visa to Eritrea. Really? In reality, most visa applications to enter Eritrea are accepted. On the contrary, it is difficult even for renowned Eritrean athletes to get visa to participate in international competition.

Migration isn’t a phenomenon solely confined to those moving from LDCs but it encompasses all human beings moving from one place to another for different reasons – work, education, family reunion or seeking refuge. Nonetheless, the politics of migration put two groups against one another: “the expat” and “the migrant”. Ironically, a highly skilled professional from an African country is more likely to be called a migrant whereas a European worker in any part of the world will be more prone to be called an expat. According to the Oxford Thesaurus of English, an expatriate is synonymous to emigrant, migrant, and displaced person. Therefore, why differentiate between immigrants and expats?

The unequal treatment and lack of tolerance of the world towards certain human beings continue to shape society’s mindsets and policies in contradiction to a globalized world where people are more than ever interconnected. Nonetheless, deep rooted discrimination and prejudice will continue to challenge and undermine any chance for social harmony.