From Rio to America, I will keep fighting Ethiopia’s oppression: Feyisa Lilesa

On Aug. 21, when I reached the finish line of the men’s marathon at the Olympics in Rio, I crossed my fists above my head. This is sign of peaceful protest used by my people, the Oromo, for the past 10 months. I did it to raise awareness; hundreds of my fellow Ethiopians have been killed by security forces only because they peacefully protested against injustice. I knew there were millions of people watching the Olympics, and I wanted the world to see me. I want to tell the world what is happening in Ethi­o­pia — in Oromia, Amhara, Ogaden, Gambella and elsewhere.

I know if I go back to Ethiopia I will be killed, arrested or put on a list of people never allowed to leave the country again. Ethiopia’s government spokesperson made a comment in the media that I would be safe. But government security forces have killed hundreds for just doing what I did. Crossing my wrists in Rio has already had a great impact on my life; I am now separated from my dear mother, my supportive wife and my precious children in Ethi­o­pia, whom I miss dearly. I am here safely in the United States on a special skills visa for the time being. 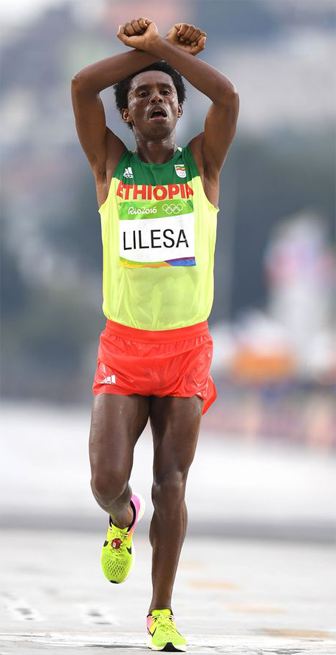 As I was preparing for Olympic competition, my thoughts were always preoccupied with the suffering of my people. The Oromo are Ethiopia’s single largest ethnic group. The Ethiopian coffee that Americans drink comes mostly from my region. We are also well known for our long-distance runners.

Peaceful protests against the government started in November when the government was forcing Oromo farmers off their land and selling it to foreign investors. Since then, human rights reports say more than 500 people have been gunned down by the security forces, but I believe at least twice as many have been killed. This includes at least 12 people that I know from my home district of Jaldu in Oromia. Tens of thousands have been arrested. Families do not know what happened to their sons and daughters after they were taken by the army and police.

While training for the Olympics, I feared for my security, because of some philanthropic work I was doing to help young Oromo students who I knew had no opportunities. I was afraid that someone could even jump out from the bushes and take my life while I was out running alone. I have not had a day when I could put my mind and body in sync to focus entirely on my training.

Recently while I was in Rio, a huge fire broke out at Qilinto prison outside of Addis Ababa. Ethiopia’s famous political prisoners were there awaiting trial, some for months or years. Others were held without being charged. Local media reported that gunfire could be heard before and during the fire. A week ago, I received the news that my close friend, Kebede Fayissa, was killed during that incident. His charred body was sent back to his family. He was arrested on Aug. 6 for protesting. I suffer knowing that I was preparing to go to the Olympics in Rio while Kebede was being arrested for doing the same thing I did — standing up for our people. Now he is gone.

The Oromo just want their full rights like any other people. They want justice, they want free speech, they want government accountability, they want a free press, they want full participation in the political process and for their constitutional rights to be respected and protected by their government. Yes, we protest, but ours is a peaceful protest.

But things are getting worse in Ethiopia. I fear for what could happen in the future. Our grievances have not been heard in the rest of the world because the government has blocked communication. Here is my question: Can nonviolence succeed if no one hears our voices or sees our protests? We all yearn for peace, but the government continues its attacks. I fear that if the killing does not stop, people could abandon nonviolence in self-defense.

My country is an important ally of the United States. We in Ethiopia and people around the world see America as a beacon of democracy and promoter of human rights. Allies should not let allies commit the abuses that happen in Ethiopia every day. I don’t think that the United States wants Ethiopia to disintegrate. I am asking the U.S. government to demand an explanation from Ethi­o­pia and to condemn the brutal and unfair actions of the government. The United States needs to push hard for democracy in Ethiopia. I think that is the only thing that will keep my country together.

I have no plans to initiate contact with the Ethiopian government, and no one from the government has reached out to me. If the government desires to have contact with me, it should free all political prisoners. It should also free those who have been arrested without even being involved in politics at all. That includes freeing all Oromo, Amhara and those from other nations and nationalities who have been unjustly detained.

I’m a runner, not a scholar or politician. But I know that all people yearn for fairness and justice. I will continue to race and pursue my career, and I will speak out until the Oromo and others in Ethiopia find justice.