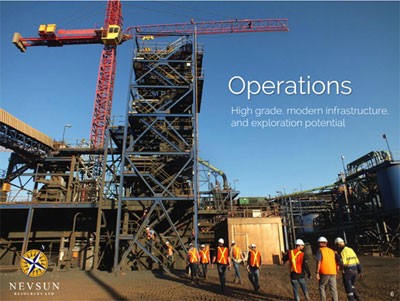 Canadian mining company Nevsun Resources is defending its operations in Eritrea following a controvercial report by the United Nations that accused the miner of using forced labour. An independent human rights report that was released this week, however, found no evidence of forced labour or human rights violations at Nevsun’s 60 percent owned Bisha mine in Eritrea.

This is in sharp contrast to the June’s UN commissioned report, which said Nevsun used forced labour at the Bisha mine after the company was required to hire government-owned contractors that included Segen Construction.

The independent report produced by LKL International Consulting underlines where the ambiguity occurs. The UN allegeations of forced labour appear to be related to the construction period rather than current operations at the Bisha Mine.

One of the authors of the study, a human right lawyer and co-author of the independent report was qouted as saying, “I’ve been able to validate what’s been happening 2013 onwards, and I have seen absolutely no evidence of national service workers being used by the different Eritrean contractors.”

The Vancouver-based miner has repeatedly come under fire over the alleged use of conscripted labour since construction of the mine began in 2008. Fingers have pointed mainly to state-owned contractor Segen Construction, said to have used national service conscripts under harsh working conditions. And while Nevsun was unable to confirm or deny the use of such labour at the site, it did take measures to prevent it from happening in the future.

“Even though Segen tried to conceal their status, the majority of Segen’s workers were in fact conscripts performing their mandatory national service,” wrote the commissioners.

The UN commissioners, despite relying heavily on a 2013 Human Rights Watch report and testimonies of former Segen workers, have never visited the mine nor the country to reach into such hard-hitting conclusion. That brings into serious question the methodology, process and collation of information in the entire UN report.

Despite several attempts by Nevsun, the UN Commission chose not to engage with the company to verify any basic facts or allegations that are incorporated in the report.

Cliff Davis, CEO of Nevsun, commented, “a recent United Nations Commission report included some sensational and unbelievable human rights allegations with respect to the Bisha Mine, which allegations were made without visiting either the mine or the country.”

“Nevsun will remain firmly committed to compliance with Eritrean national law and the continuation of international standards and practices with respect to human rights. We also remain committed to dialogue with the Commission, other UN agencies and stakeholder groups. “

Todd Romaine, vice-president of corporate social responsibility at Nevsun, said in an email that the company’s operations help Eritrea in its ongoing development. He added that Nevsun is optimistic that well-paying jobs like those in the mining sector can help stem youth migration.

Eritreans working for Nevsun are one of the highest paid in the country. Canada’s Ambassador to Eritrea, Dominique Rossetti confirmed that on his recent testimony by saying, “Nevsun’s truck drivers, for example, as an illustration, receive salaries that are twice that of a government minister.” This was, in fact, in comparison to the $400 a month salary of President Isaias Afwerki.

Lloyd Lipsett, co-author of the Nevsun-commissioned report and principal of LKL, said in an interview that in his four trips to Eritrea, he has yet to see any outright repression or people being mistreated.

But he said his role has been to assess human rights conditions related to Nevsun’s operations, and he has not specifically investigated allegations against the government, such as secret detentions or abuse in prisons.

The human rights lawyer said the UN allegations of forced labour dealt with the construction phase of the mine, while his assessments started after the mine was already operational in 2013.

“I’ve been able to validate what’s been happening 2013 onwards, and I have seen absolutely no evidence of national service workers being used by the different Eritrean contractors,” said Lipsett.

He said the people he interviewed denied the use of national service workers in the past, but he doesn’t have enough certainty to make definitive conclusions himself.

Those UN accusations, however, are set to be tested in B.C.’s Supreme Court, where three Eritrean refugees are suing the company for allegedly being forced to work at the mine.

The Chair of the Parliament of Canada’s Subcommittee on International Human Rights, Hon. Scott Reid, in his subsequent testimony to the Subcommittee after participating a certain audit activity at Segen Construction camp confirmed that, there are “no evidence of national service workers at the Bisha Mine.”

For a variety of reasons, “that it is highly unlikely that forced labour is being used at present, or will be used in the future, by state-owned subcontractors at the Bisha mine.”