Q : When and how was the Fred Hollows IOL Lab created?

IOLs are implanted in the eye to replace the natural crystalline lens if it becomes opaque due to the condition known as a cataract. The Laboratory was commissioned in 1994 with an ambitious vision of eradicating cataract blindness. It was constructed with the full financial and technical support provided by Fred Hollows Foundation Australia, which was set after the passing of the late ophthalmologist professor Fred Hollows.

The dedicated Ophthalmologist, Prof. Fred Hollows was a good friend of the Eritrean people and especially very fond of the Eritrean People’s Liberation Front (EPLF) after his visit of the liberated areas of Eritrea, during the struggle for independence.

Prof. Fred observed how the Eritrean People’s Liberation Front (EPLF) managed to produce badly needed drugs in the harsh conditions and was really impressed and said that if the Front is capable of producing pharmaceuticals, it would also be able to make intraocular lenses in the bushes.

While Fred was working for the establishment of the Intra-ocular plant, Eritrea became independent in the year 1991, making it possible to have the factory built in Asmara. Fred wanted to help people who help themselves and in Eritrea he certainly made the difference.

Q : What type of lenses does your company produce?

At the moment the lab produces two types of models of rigid lenses known as FH 105 and FH 106 and two types of models of Hydrophilic Foldable lenses known as FH 202S and FH 203S with a wide range of diopters from +8.0 to +30.0. So far the Laboratory has produced more than 2.2 million lenses and globally over 2.0 million people have become beneficiaries of our products and had their sights restored with Fred Hollows-Asmara IOLs. The Laboratory is a promising plant that can produce many types of products relating to eye medication.

Q : How many lenses does your company produce per year?

The Fred Hollows IOL Laboratory has commenced production in mid 1995 and produced 15,000 lenses. Since then production has gradually increased to the present level, close to 200,000 lenses per year.

Q : What is the geographical distribution of your customers, in Africa and the world?

The Fred Hollows IOL Laboratory-Asmara has met domestic demand and is becoming competitive in the world market with 65% of its products being exported to Asian countries and 30% to countries in Africa, Europe and Oceania.

Q : The IOL Laboratory is a high tech industry, how do you recruit your employees, how are they trained? How many are they?

The IOL Laboratory has total of 60 employees. It maintains high commitment to the on-going staff development and training ensuring that the facilities continue to meet the demands of world class production and management standards.

All the employees are Eritrea Nationals. The Laboratory gives refresher courses and training in-house as well as abroad when a new technology is introduced and an up-grading of their qualification is required.

Q : What is the quality standard that you follow?

The quality of the products undergoes experiment by in-house and international quality control institutions, and that the products’ quality and effectiveness is making it competitive in the world market. Quality is built into the product at every stage of the manufacturing process by interlocutory set of Standard Operating Procedures. The Laboratory is equipped with modern Quality Control testing facilities, including its own in-house microbiological and chemical testing facility.

In the year 2000, the Laboratory was ISO 9001, ISO 13485, MDD certified and CE Mark accredited by a certifying body known as SGS (Societe Generale de Surveillance), United Kingdom. Since then annual quality assurance audits have been conducted each year and the Laboratory has successfully passed each audit and maintained its accreditation.

This certification confirms compliance with the highest European and international standards of Good Manufacturing Practice (GMP) of medical devices and allows the Laboratory export to Europe and other countries of the world.

Q : Eritrea is under sanction. How are these sanctions affecting your company?

It has hit the laboratory hard when the western banks broke up ties so abruptly in early 2016. At that time, we had orders in the pipeline and business deals that were in progress and obviously the impact was big. Business relations that took years to build could easily be snapped by such actions.

At the moment, however, the Eritrean banks have other arrangements and we still face some problems from time to time but we are doing our level best to alleviate the problem.

Q : What competitors are you facing in the African Market? How do you face them?

In its more than 20 years in the industry the lab had secured a good market share in Asia; but sadly our market share in Africa has not been up to our expectations. It’s true the Fred Hollows IOL lab had exclusive distributors in South Africa & Sudan and very good reception at some African countries, countries where they have firsthand look of our products. But still we are not at all satisfied by the progress we‘ve made so far. We know that we have enormous tasks at hand in introducing the brand further. It’s not going to be easy, It’s an up hill road with a disproportionate or unfair competition but hopefully, with the help of our African counterparts, we will make a progress. It may be slow but sure progress.

Q : What help would you want to receive from African customers and African governments

We want them to give us a chance, a chances to prove that what we claim is accurate. I also hope that the common attitude or connotation that goes with African products is wiped away from the minds of some people with such stance.

Q : What arguments would you put forward to attract more African customers to buy your FH lenses rather than other brands?

One of the two guide lines of the laboratory is to see a world where no one is needlessly blind. And to that effect we pay every attention to Quality. One of the key measurable elements the FH brand takes pride on is the Surface finish of the lens. The surface quality testing and inspection procedures practiced in the Fred Hollows IOL Laboratory ensure that all lenses released for sale are uniformly polished and free from any form of cosmetic defects.

As proven by independent testing laboratories, the smoothness of FH IOLs was even compared to that of lenses produced by other leading IOL manufactures such as Alcon. Yet, price has been kept quite low with almost zero profit margin to ensure that the lab’s second guiding principle – affordability is preserved. Hence we can proudly say that the FH brand is simply, a very high quality lens at an affordable price. 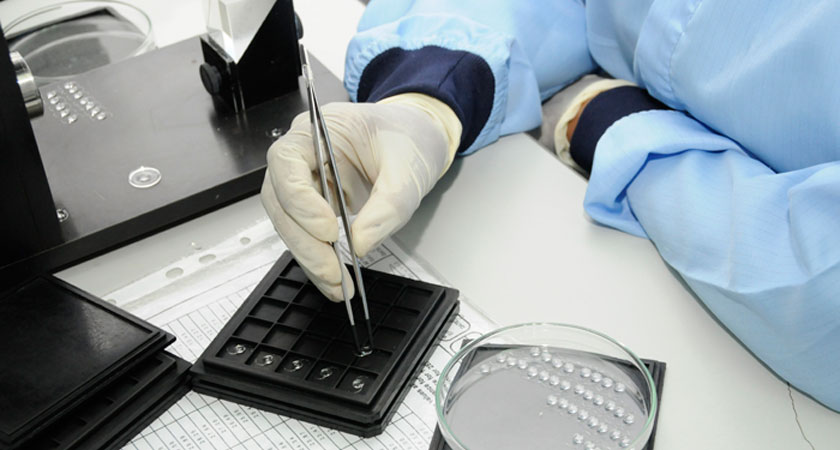