Nevsun Resources (NYSEMKT: NSU) is moving forward as a mining company, expanding its operations in Serbia along with continuing its operations from the Bisha Mine in Eritrea, Africa. As we will see throughout this article, the company’s strong recent Bisha Mine results, along with the growth potential of the company’s new Timok Project, make it a strong investment at the current time.

Nevsun Resources’s current production comes from the Bisha Mine which is an open pit reserve with a ~4-year mine life presently. However, once the open pit mine runs out, the company will likely look for new resources or other mining techniques to extract additional resources.

In 2017, Nevsun Resources anticipates production of roughly 200 million pounds of zinc at a cash cost of $0.80 along with 25 million pounds of copper at a cash cost of $1.65 per pound. The company also has 15 thousand ounces of gold stockpiles it plans to sell over the year. These gold stockpile sales should be basically cash in Nevsun Resources’s pocket that it can put towards future growth.

With zinc prices currently at roughly $1.50 per pound and copper prices at roughly $3.50 per pound, that means roughly $200 million estimated in 2017 profits for the company. This is incredibly impressive for the next several years for a company with a market cap of $700 million and another massive asset that will bring it strong cash flow going forward.

Nevsun Resources has had a difficult time recently because to a naive investor, it appears as if the company has decreased its dividend and seen its earnings drop. But what the company has really done is improve its financials to put itself in a position where it can generate strong cash flow and start the Timok Project in the coming years.

The Bisha Mine currently has a multimillion dollar exploration budget that should help the company to make additional discoveries. The company is hoping to find new reserves, and given the value of this mine to the Eritrean government, the company should have strong support for any exploration that it chooses to undertake. The company has a strong history of growing Bisha Mine reserves.

Currently, inferred reserves at current prices are roughly 1.5 million tons of zinc and 0.34 million tons of copper. These are significant resources that are worth a ton in the current market and the company believes that the Asheli region has high underground resource potential. Should any significant discoveries be made here, the company can open up the region to profitable underground mining extending the reserve life.

Nevsun Resources currently has $3 million remaining in its 2H 2017 budget which would allow the company to undergo additional exploration. The company has several Greenfield and Brownfield targets in areas that look to be of high resources potential that are noticeably larger than the current Bisha Mine. Any significant resource discoveries here would be a massive discovery for the company.

Nevsun Resources’s Timok Project has significant potential going forward, with the project having the resources to become significantly larger than the company’s current Bisha Mine project.

Eritrea, where the Bisha Mine is located, is a country that has had a poor history of human rights. This, combined with the fact that the Bisha Mine is a shared project with the Eritrean government, means that Nevsun Resources’s stock price has been pushed down by investor worries over the company working with such a government. However, with the Timok Project, the company will now have a major project location in a much more stable country, Serbia. 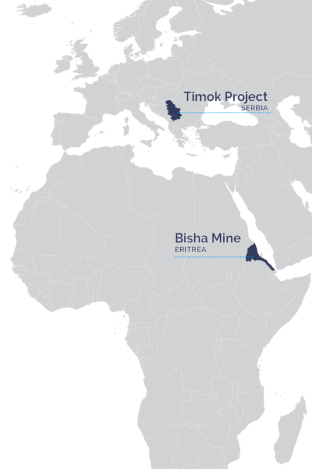 Serbia is a country with strong federal government support from mining and a low tax rate. The country is aiming to increase its GDP contribution from mining from 2% to 5% by 2020 and such an increase can only be accomplished by making your country a strong jurisdiction for mining. As a result, the region has other major minors such as Rio Tinto (NYSE:RIO) and Freeport-McMoRan (NYSE:FCX), and this shows how Nevsun Resources is moving to a much stronger mining jurisdiction.

The Timok Project Upper Zone can simply be described as one of the best undeveloped copper projects in the world. The project has an after tax NPV of $1.5 billion and a 50% IRR at $3 pound copper and $1300 oz. gold (gold prices are currently slightly below that, but copper is at $3.50 per pound which will mean a noticeable increase in profits).

The company anticipates that it will initially need $0.63 billion in capex. Given the company’s current $0.7 billion market capitalization, this is a significant capital investment and part of the reason why Nevsun Corporation has cut its dividend. However, it’s important to note that once the company spends this money, it’ll have just a 1.5-year payback period for this investment.

On top of this, the Nevsun Resources anticipates $2.8 billion in cumulative cash flow. That is more than 4x Nevsun Resources’s current market cap and that’s at copper prices that are 15% below current prices. That shows the valuation of just the Timok Project Upper Zone and shows how Nevsun Resources has huge growth potential going forward.

Nevsun Resources has undergone an additional 37 kilometers of drilling to bring the total to 100+ kilometers and significantly increased the total measured and indicated resources. On top of that, the company has added arsenic to its measured and indicated resources. While the company has not released any details, that means there could be some profit potential here.

However, the company has determined that the Timok Project Upper Zone contains at least 1.05 million tons of copper and 2.2 million ounces of gold. At current prices, these are valued at more than $8 billion or several times the resources of the Bisha Mine. The point this is trying to show is this massive mine has the potential to increase Nevsun Resources’ market cap by several times and shareholders aren’t taking it into account.

To provide a timeline of these expected returns, Nevsun Resources anticipates that production from the mine will begin in 2021. As an investor in the company, I recommend that you be willing to wait 5-6 years to see a return in your money; this isn’t going to be an investment you buy today and sell next year. From now until 2021, Nevsun Resources will be sinking money in the mine; however, thanks to its cash pile and Bisha Mine cash flow, this won’t be an issue for the company.

More importantly, the Timok Project opens up with some high grade copper resources with highly profitable concentrations in the double digits. That means from 2022-2025, the Timok Project will generate $2 billion in cash flow. So for an investor who is willing to hold the stock for the next 8 years, the company will generate almost 3 times its market cap in cash in the next 8 years.

That is significant cash flow that will mean big dividends for shareholders.

And one last thing to pay attention to is this massive Upper Zone and its profit potential is still dwarfed by the massive Timok Lower Zone which has extensive copper-gold resources and block cave mining potential. As a result, while Nevsun Resources was able to acquire 100% of the Upper Zone, Freeport-McMoRan, one of the largest mining companies in the world, remains a 54% JV partner on the lower zone.

The company plans to undergo a massive $20 million drilling project in the Lower Zone in 2018 to further define mineralization and I am optimistic that this will reveal great things. I look forward to seeing and updating you guys on this mineralization.

Nevsun Resources has had a difficult time recently as the company has cut its dividend and spent a significant amount of its cash on its acquisition of the Timok Project. This has resulted in the company being sold off and dropping down to a current price of less than $2.3 per share, or a market cap of $0.7 billion. At this price, the company is significantly undervalued.

More importantly, the company is working ahead on the Timok Project and it anticipates production starting by 2021. This will bring a strong increase in profits especially as high grade ores are mined initially. This means the potential for a significant increase or cash payout to shareholders for those investors who are willing to hold onto stock.

As a result, I recommend Nevsun Resources as an ignored investment with huge potential to investors who are willing to hold the stock for a number of years.