By US Embassy – Asmara,

Meet Natalie Brown, the new U.S. Chief of Mission to Eritrea. Natalie Brown is honored to serve as the United States Chief of Mission to Eritrea. Throughout her career as a diplomat, she has worked to advance democratic values, enhance peace and security, promote economic prosperity and encourage the education and societal participation of women and girls.

She is looking forward to sharing Eritrea’s rich culture and history.

As we all know, the United States established diplomatic relations with Eritrea in 1993, following our independence from Ethiopia’s 1961 annexation.

According to the United States, it is the ongoing government detention of political dissidents and others, the closure of the independent press, limits on civil liberties and Eritrea’s failure to accept a proposed U.S. Ambassador that caused the existing strained U.S.-Eritrean relations.

Eritrea rather accused United States’ hostility that sour the relation between the two countries.

The U.S. said its interests in Eritrea include reconciling ongoing disputes with Ethiopia and Djibouti, addressing human rights issues, promoting economic reform, and encouraging Eritrea to contribute to regional stability. 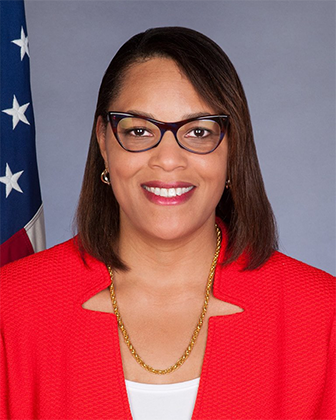 However, the US made it absolutely clear, even to this date, that it was not going to shoulder its responsibility in regards to the Ethiopia – Eritrea boundary ruling and even imposed two unfair and illegal sanctions in order to muzzle Eritrea and kill any discussion of Ethiopia’s continued occupation of Eritrean territory.

Currently, the United States and Eritrea have very little bilateral trade. However, the U.S. provides no bilateral assistance nor any military-to-military cooperation with Eritrea.

There currently is no U.S. Ambassador to Eritrea; the outgoing U.S. Chargé d’Affaires was Louis Mazel.

Louis Mazel appears, to most Eritreans, as a man of good will as they follow his short and unusually positive messages about Eritrea on the embassy’s Facebook page. He was considered a breath of fresh air, especially when compared to his predecessors such as the inept Ronald McMullen who had done much to foul-up relations between the two countries.

All this in mind, we are wishing the new U.S. Chief of Mission, Ms. Natalie Brown, success and hoping that she will do her level best towards improving relation between Eritrea and the United States.