First, I congratulate you on organizing a successful conference titled: #RethinkingEritrea. Overall, your presentation was clear and concise, while Mr. Seth Kaplan and Mr. Anthony Carroll’s were very focused and informative. I only hope this is a beginning of many more endeavors to educate policymakers in Washington D.C. about Eritrea and the strategically important region of Horn of Africa.

I decided to write you this open letter after 1) reading several articles attacking you personally, and 2) seeing your Dec. 12, 2016 tweets in response to Mr. Salih Younis’s critique of your work.

As you may know, the so-called “opposition” groups or “activists” have already doled-out several articles criticizing you personally for organizing such a successful conference on Eritrea. Predictably, all these articles are part of concerted efforts to define and redefine you and the Atlantic Council, just as they have done in the past to so many people who refused to be part of their agenda.

You may also have noticed that while some of them have intentionally ignored the real political issues you raised in an effort to improve US-Eritrea relations, many have intentionally misconstrued your work and recommendations altogether.

One article shamelessly declared that you’re “Isaias’s new lipstick;” another dubbed you as a “useful idiot” of the Eritrean government. Meanwhile, Mr. Younis and his two partners at Awate.com have further sharpened their knives, spending countless hours at the keyboard targeting you personally, using various pseudonyms to spread similar lies.

Five months ago, they characterized you as “wrong” and “uninformed,” today you are “undercover lobbyist.”

Warning: Younis and Co. are online warriors who really understand the power of narrative.

These men mean business, and their backyard is full of dead bodies and unwilling prisoners. The secret to their success is, of course, very simple — no lie is too small to repeat often, until it builds up significant digital footprints to confuse the unassuming.

Shout out for Sal Younis response to #AtlanticCouncil reports on #Eritrea. https://t.co/VzyUTxXNxW. Sal is always worth reading, but: 1/2

Lastly, I understand why you attempted to engage Mr. Younis via Twitter on Dec. 12, but his response was dangerously predictable. Mr. Younis slowly wishes to drag you deeper into the swamp of the Eritrean politics.

Another Warning: Once the communication door left open (in private or public), Mr. Younis tends to not stop until he feels you are either losing your self-confidence or ready to surrender.

He missed main takeaway of #Eritrea event: not even Dan Connell disagreed with basic recommendations in report. We can find common ground.

By all accounts, Younis and Co. feel particularly emboldened and deserving more of your attention since you gave them credence by referencing their infamous fake-but-camouflaged-as-marginal-news page (Gedab News) in your September 2016 report submitted to the U.S. House Subcommittee on Africa.

At this time, the safest and easiest solution is to entirely ignore Younis and Co. All those who’ve weathered their attacks over the years, and come out on top, at times unscathed, are those who ignored them altogether.

Also worth noting re: #Ertirea event. Connell agrees UN COIE was misguided & would likely have done harm, not good. https://t.co/poN4N859fG

I only make this suggestion simply because your expertise and interest is U.S. – Eritrea relations, not the nuances of the Eritrean domestic politics. To do anything else might be conceived as surrender.

Many thanks for your work and the great conference. Please know that the commentaries I have seen so far, in websites such as this one, are all very supportive of your efforts, many openly repudiating the lies of these known detractors.

NOTE: Below are selected reader’s comments on this site in response to the analysis written by Mr. Teweldeberhan Gebre, well known critic of the Eritrean government. Mr. Gebre has debunked Mr. Younis’ critique of you and your work. 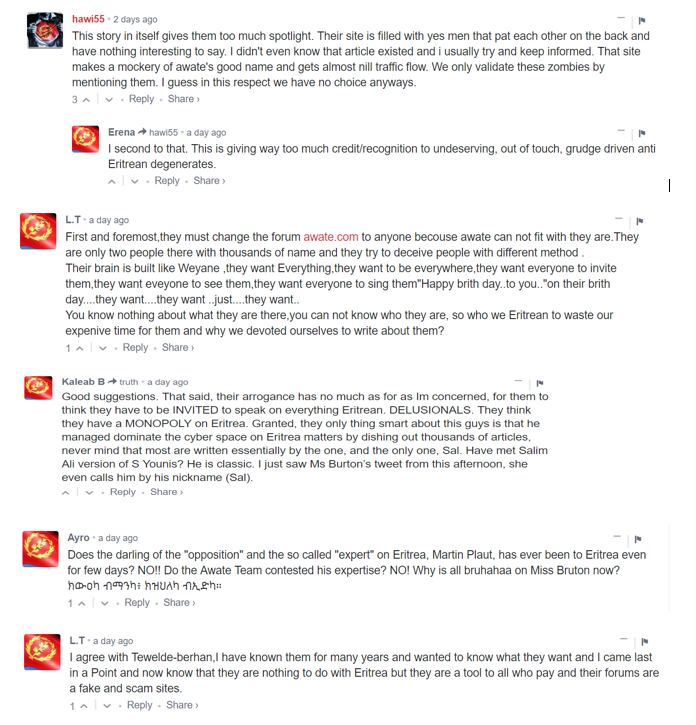