By Siobhan O’Grady and Brian Stout | for Foreign Policy,

When Ethiopian marathoner Feyisa Lilesa held his arms in an “X” as he crossed the finish line for a silver medal last month at the Rio Olympics, he says he was culminating a political protest he’d planned for months. But top Ethiopian officials say he was put up to the stunt by U.S. based opposition groups in order to protest the government’s crackdown on demonstrations and further fuel controversial secessionist movements at home and in neighboring Eritrea.

Speaking to Foreign Policy in an exclusive interview from the living room of his suite at the Waldorf Astoria Hotel on Tuesday, Ethiopian Prime Minister Hailemariam Desalegn said he strongly believes that groups of anti-government Ethiopians based in the United States convinced the athlete to use the Summer Games as a protest venue. He also figures they helped get him from a Rio hotel to Washington, D.C. in time for a televised press conference last week.

“It’s me who sent him to Rio for the Olympics, and we expected him to come back after winning the medal,” Hailemariam said, specifically naming members of the Oromo Liberation Front as having likely contributed to Feyisa’s protest. “This is not the capacity of the man himself. It’s something which has been orchestrated by someone else from outside.”

The OLF did not respond to multiple requests for comment. Feyisa could not be reached for comment, but he told the Washington Post earlier this month that Oromo sympathizers helped him with his U.S. visa application.

Feyisa’s move was meant to signal solidarity with protesters in Ethiopia’s Oromia Region, who have taken to the streets in recent months to protest their marginalization from the country’s central government. International human rights groups, including Human Rights Watch, have reported that security forces killed more than 400 peaceful protesters in the Oromia and Amhara regions since demonstrations began last November.

Feyisa claims that he had planned his own protest in Rio for months. Fearing retribution for his political demonstration, the silver-medal winner left the Olympic Village after his race and hid in a Brazilian hotel until early September, when he flew to the United States and appeared at a press conference organized by Rep. Chris Smith (R-N.J.), chairman of the House Foreign Affairs subcommittee on Africa. There, Smith announced his plan to introduce bipartisan legislation that would recommend the Ethiopian government allow an independent rapporteur into Ethiopia to assess the human rights situation in the country. Ethiopia wants nothing to do with that.

Hailemariam, who is in New York for the U.N. General Assembly this week, told FP that he would never allow an outside investigation to take place when Ethiopia has its own institutions available, because to do so would be a “breach of sovereignty.”

In an email to FP, Smith said that the rapporteur would not be imposed upon Ethiopia without its consent, but that “in the absence of any credible human rights reporting from the Ethiopian government on many incidents regarding the denial of human rights,”it would be standard for the U.N. to “gain an impartial assessment” of the situation on the ground.

But Smith’s claim that Ethiopia has not proved itself credible in human rights investigations rubbed both the prime minister and the ambassador the wrong way.

“Ethiopia is a sovereign country and Ethiopia has the capability to investigate its own case,” the Ethiopian ambassador to Washington, Girma Birru, told FP in a conversation at the Ethiopian Embassy in Washington last week. “When the Ethiopian government is assumed to have failed to do these things, it’s an insult.”

He accepted that protesters have legitimate grievances regarding land reform but denied accusations of institutional discrimination by the government, pointing to Oromia’s share of seats in both chambers of parliament — the largest of any region.

Critics of Ethiopia’s human rights investigations say the government deflates numbers in order to cover up abuses taking place at the hands of their security services. Human Rights Watch’s death statistics roughly quadruple those of Ethiopian civil society groups such as Human Rights Council Ethiopia, a nongovernmental organization that monitors human rights in the country, and those published in an official Ethiopia Human Rights Commission report presented to the country’s parliament. 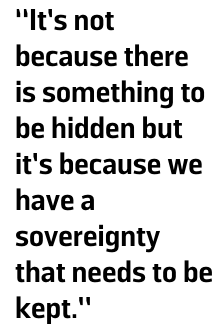 The Ethiopian parliament endorsed the commission’s findings, which determined that agitators seized upon the peaceful protests and used them as an opportunity to incite ethno-religious hatred. According to the commission, 28 police officers were killed in November and December alone. The commission also reported that excessive use of force had been used on some occasions in the northern region of Amhara, but not in Oromia. And Girma stressed that international advocacy organizations failed to acknowledge that protesters also used weapons.

Girma could not explain why security forces have fired upon crowds with live ammunition instead of rubber bullets or other nonlethal rounds commonly used in riot control. But he pointed out that the protests in which the government found itself to have used excessive force were illegal for failing to provide local authorities with advance notice.

And both Girma and Hailemariam said that their government is committed to revealing abuses that may have taken place on both sides. According to the prime minister’s count, some 70 percent of those wounded during the protests this year have been law enforcement officials. But he also said that there are measures in place to determine whether excessive use of force may also have been used against civilians by government security forces.

“There is no need for somebody from outside to come and investigate this issue,” Hailemariam said. “It’s not because there is something to be hidden but it’s because we have a sovereignty that needs to be kept.”

The Oromo protests have put the Ethiopian government on shaky ground with international partners who worry the intensity of the government’s crackdown could spark larger demonstrations, and threaten to disrupt the relatively stable nation that finds itself sandwiched between war-torn South Sudan on one side and the failing state of Somalia on the other. More than 700,000 refugees now live in Ethiopia, straining the fledgling democracy’s already limited resources.

Last year, Ethiopia hosted talks intended to end the brutal civil war in South Sudan. But the peace deal signed in Addis Ababa last August has since all but fallen apart: Opposition leader Riek Machar took eight months to return to Juba after the talks, then fled in July after his forces and those loyal to his rival, President Salva Kiir, opened fire on one another in the capital.

Hailemariam said Tuesday that Machar, who is now in Khartoum but lived in Ethiopia for significant stretches of the civil war, will be allowed to pass through Ethiopia in his travels but is not welcome to stay again long-term.

“We do not need someone who is leading an armed struggle in Ethiopia,” he said.