Speaking during the presentation ceremony with Ms. Susan Ngongi-Namondo, President Isaias underlined that the UN offices in Africa need to seek ways and means of tackling the prevailing problems in the continent beyond limiting themselves with drought, hunger and the like.

The President further reminded the United Nations to give due attention to the development of African resources and thereby enable the continent achieve self-reliance besides ensuring development.

He also wished the Country Representative successful tour of duty and take the growing Eritrea-UN relations to a higher level.

In the meeting with the Japanese Ambassador, Mr. Toshitsugu Uesawa, President Isaias explained that in view of the fact that aid has little significance in the development of Africa, the continent deserves effective investment from the Japanese side taking into account its substantial resources.

>> ALSO READ : Government of Japan to Open Embassy in Eritrea

Noting the impressive development Japan has registered through the hard work and rich tradition of its people in overcoming the devastation it sustained in World War II, President Isaias underlined that Africa needs Japanese experience and knowledge, apart from humanitarian aid. 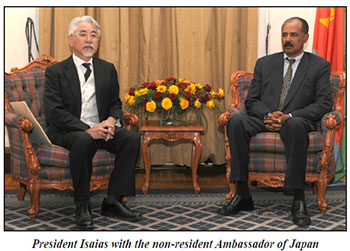 On receiving the Ambassador of Switzerland, the  President pointed out that the issue of illegal migration and human trafficking calls for collective action and as such Eritrea would not entertain illegal bilateral agreements.

Noting that the issue of illegal migration and human trafficking has become a 21st Century slavery involving different parties, President Isaias underlined that Eritrea is pressing for free, independent and accountable investigation involving the United Nations.

In this connection, the President expressed Eritrea’s   readiness to cooperate in the legal process.

While receiving the Ambassadors of the Hellenic Republic, Republic of Malawi, and the Republic of Sri Lanka, President Isaias said that he looks forward to the enhancement of bilateral relations with Eritrea.