In a meeting at the State Palace, the two leaders held discussion focusing on bilateral relations, enhancing mutual cooperation and regional as well as international issues of mutual interest.

In briefings they gave to local and international media outlets following the meeting, Presidents Isaias and Omar Al-Beshir pointed out that their discussion was a continuation of the regular consultations and exchanging of views between the two countries and leaders.

Noting the historical Eritrean-Sudanese ties, President Omar Al-Beshir elaborated that the two leaders reached understanding to deepen the long-standing bilateral relations and cooperation, in addition to conducting exchange of views on the objective situation and developments in the region in general and Sudan in particular.

The Sudanese President further explained that in view of the exemplary relations between Eritrea and Sudan, both leaders exchanged information regarding the very sensitive stage Sudan is currently undergoing and other regional issues. President Omar Al-Beshir also indicated that the two leaders reached understanding on the need for joint work programs.

President Isaias on his part underlined that though there exists mutual political will on both sides to reinforce bilateral cooperation in line with the prevailing Eritrea-Sudanese strategic ties, the work accomplished over the past five years is not that satisfactory. Such effort should be stepped up in the future, he added. 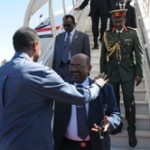 President Al-Bashir explained in a press statement following the talks between the Sudanese and the Eritrean sides in Asmara Thursday afternoon that his visit to Asmara came in the context of the joint consultation between the two sides on all the regional issues of mutual concern, referring to the firm and deeply-rooted relations between Sudan and Eritrea

President said that the meeting discussed the political developments in Sudan after the separation and ways to deal with the new reality, besides the issues of Darfur and eastern Sudan

He reiterated Sudan keenness to establish strong relations and peaceful co-existence with the new state in the south, expressing hope that what has happened in Sudan will not to be repeated in other African states

Al-Bashir said he reviewed with the Eritrean President, Assais Afwerki, the impacts of events in Egypt on the region

Meanwhile, the Eritrean President, Assais Afewerki, affirmed that the relations between Sudan and Eritrea will continue to be strategic and will further be consolidated

He said that the meeting provided an opportunity for both countries to follow up the issues and read the features of the future regarding the interests of the peoples of the two countries, expressing his thanks and appreciation to the President of the Republic for visiting Eritrea

President Al-Bashir arrived the Eritrean capital, Asmara, accompanied by the Minister of the Presidency, Gen. Bakri Hassan Salih, the Minister of Foreign Affairs, Ali Karti, and the Director of the National Security and Intelligence Organ, Gen. Mohamed Attal-Moula, in a one-day official visit.