The Bahraini news agency published the list of demands which Saudi Arabia, Bahrain, the United Arab Emirates and Egypt handed over to Qatar via Kuwait.

According to BNA, Qatar was requested to decrease diplomatic representation with Iran and curb ties with it, expel revolutionary guards from Qatar, limit relations with Iran to commercial trade without violating the sanctions imposed on Iran and without violating the security of Gulf Cooperation Council countries and sever any military or intelligence cooperation with Tehran.

The demands also called on Qatar to immediately shut down the Turkish military base which is being built in Qatar and to suspend any military cooperation with Turkey inside Qatar.

Qatar was also demanded to suspend all forms of funding to terrorist or extremist individuals, entities or organizations and to all those included in the Saudi, Emirati, Bahraini and Egyptian terror lists and in the American and international lists and to surrender all figures designated as terrorist by these lists while holding their property until they’re handed over.

They also demanded Qatar not to host any of these designated terrorists in the future and to commit to providing information about them, such as information on their activity, residence and finances. This is in addition to demands to shut down Al-Jazeera television channels and all channels affiliated with it. 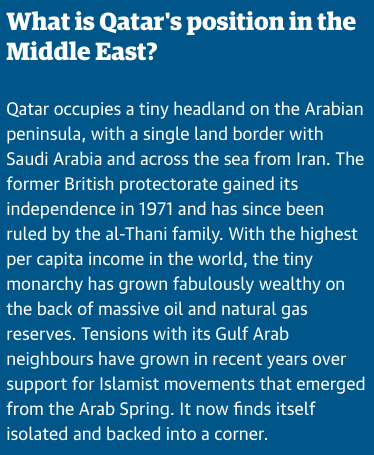 Qatar was also ordered to stop interfering in other countries’ internal affairs and foreign interests and refrain from granting the Qatari nationality to any Saudi, Bahraini, Egyptian and Emirati citizenship and extradite all those who had been granted a Qatari nationality via procedure which does not comply with these four countries’ regulations.

They also demanded Qatar to submit a list of those who have been granted a citizenship from these four countries and to submit all previous information about cooperation between Qatar and those naturalized.

The demands also include submitting all data about the opposition figures that Qatar supported and shutting down all media outlets which Qatar directly or indirectly supports.

The four countries called on Qatar to be in harmony with its Arab and Gulf surrounding on the military, political, economic, social and security levels in order to guarantee security and to activate the Riyadh 2013 agreement and the Riyadh 2014 agreement.

According to BNA, these demands are somehow similar to the Riyadh agreement which Qatar signed in 2014. Its report concluded that Doha thus has no justifications to reject these demands.