Saudi Arabia has announced plans to expel migrants working or living illegally in the kingdom. Illegal migrants have been ordered to register their intention to leave with the Saudi authorities by August 24 or face detention, fines and eventual deportation.

Of the estimated 10 million migrant workers in Saudi, up to 500,000 are Ethiopian nationals. The money that Ethiopian migrants globally send back home is significant—over $4 billion in 2015—and plays an important role in mitigating the crippling poverty in Ethiopian households. But while many of the Ethiopians in Saudi come for economic reasons, a significant number arrived after fleeing serious abuses at the hands of their government.

In many other countries, these Ethiopians could claim asylum and potentially be entitled to international protection. The problem is, Saudi has no refugee law and no asylum system and is not a party to the United Nations Refugee Convention, which means that should expulsions be carried out—as during an earlier expulsion of irregular migrants in 2013, many thousands of Ethiopians who should have refugee protection could be forcibly returned home to face the persecution they fled.

Abdi was one of them. He told me that police arrested him and some of his classmates after students at his school started protesting against the government. He was then transferred to a military camp, where soldiers beat him severely. After his release, he fled Ethiopia, traveling through four countries before finding a construction job in Riyadh. In early 2014, Saudi police deported him.

He returned to his hometown with the assistance of the International Organization for Migration. Six days later, he was detained again and taken back to the same military camp. He was kept in a dark hole for three months, and taken out nightly for beatings while he was questioned about what he had been doing in Saudi Arabia. When I spoke with him in December 2016 after his release he was again en route to Saudi Arabia.

Most of the Ethiopians we interviewed who were part of the 2013 Saudi expulsions were detained within a week of their return to Ethiopia. And most of those were tortured in detention. All had originally left Ethiopia because of Ethiopian government human rights violations. Since they were unable to claim asylum in Saudi, their fate was sealed when they were deported. Human Rights Watch has also documented detention and torture of forced Ethiopian returnees who had been living in Kenya, Egypt, Uganda, Djibouti, Somalia, and elsewhere.

Ethiopian security forces’ violent crackdowns have become frequent in recent years. Tens of thousands of Ethiopians, many of them from the Oromia region, have fled the country since November 2015, the start of a year of bloody protests. Security forces killed over 1,000 protesters, and detained tens of thousands more. Youth were targeted, torture was widespread in detention, and the future remains uncertain for many young Ethiopians. Earlier in August, the government lifted a state of emergency that had been in effect for 10 months. 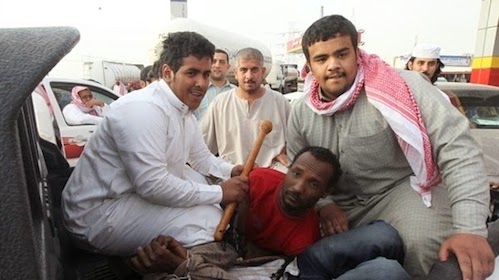 I have interviewed hundreds of young Ethiopians who fled their country during this most recent violent crackdown. Many do not claim asylum in neighboring countries due to long refugee processing times, perceptions of pervasive Ethiopian government surveillance, lack of resettlement options, and the economic challenges of refugee life.

I recently interviewed 20 Ethiopian youth, mostly Oromo, in a neighboring country, all of whom alleged they had been brutalized by security forces for protesting. Most had visible torture marks and some had been shot, yet three quarters of them told me they had no plans to try to claim asylum anywhere. Instead they told me they would risk further abuse and conflict to make it to Saudi Arabia, where at least they could eke out a living and send money to their families back home.

Ethiopia’s donors have voiced concern over the humanitarian impacts of returning another 500,000 people to areas with endemic poverty and increasing drought.

By the end of June, only 45,000 Ethiopians had registered with the Saudi government and voluntarily returned home. For the rest, with no asylum system to turn to and deportations imminent, Ethiopian migrants understandably live in fear. Saudi Arabia should halt the deportations until it can establish refugee status determination procedures for those at risk of persecution, like Abdi, who are fleeing repression back home. As Abdi told me, “How long will I survive if I keep getting detained and tortured in my homeland?”