This article introduces five mine developers that are realistically able to generate significant gains for their shareholders in 2017.

By Peter Arendas | for Seeking Alpha,

There is a lot of senior and junior mining companies but not all of them are worth investing in. Some of them have more potential than others and in some of the cases, the risks far outweigh the potential gains. I decided to compile a list of Top 5 mine developers that are realistically able to generate triple-digit gains for their shareholders in 2017.

There are definitely some other companies with high potential, that could be considered for inclusion into the Top 5. Please, feel free to share your opinions here.

Platinum Group Metals prepared several disappointments for its shareholders in 2016. The ramp-up process at its South African Maseve PGM mine takes much longer than expected and the company was forced to undergo several rounds of equity financing. As a result, the share price of Platinum Group Metals grew only by 4% in 2016, even though it was up by more than 150% at one point. Although other negative Maseve-related surprises are not excluded, shares of the company are very attractive. The main reason is the Waterberg deposit. 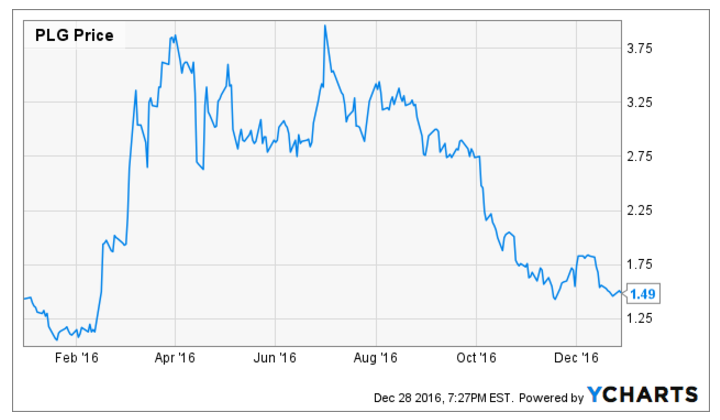 The Waterberg feasibility study is expected by the end of 2017. If all the permits are granted, the mine construction should start in 2018. The Maseve mine is crucial for Platinum Group Metals to be able to finance its share of the Waterberg capex without an excessive share dilution. Some positive news regarding the Maseve mine ramp-up could push the share price notably higher. Platinum Group Metals is a risky investment, but the Waterberg deposit alone is worth much more than the current market capitalisation of approximately $170 million.

Syrah Resources is going to become a graphite producer in 2017. Its Balama deposit in Mozambique contains measured, indicated and inferred resources of 128.5 million tonnes of graphite and proven and probable reserves of 13.1 million tonnes of graphite. It is probably the largest graphite deposit in the world and the plan of the company is to become the largest graphite producer. The shares of the company lost more than 28% of their value in 2016, as the company had to raise almost A$200 million to finance the Balama mine construction. But the mine is fully funded now and it is able to expect that Syrah Resources will be re-rated from a developer to a producer over the coming quarters.

The Balama graphite mine will have a capacity of 380,000 tonnes of graphite per year. The expected cash cost is only $286/t of FOB graphite. The initial capex should be less than $200 million and the after-tax NPV (10%) is more than $1 billion at a weighted average basket graphite price of $1,000/t. The production is expected to start in Q2 2017, with full production from Q3 2018.

The main catalysts that should push share price of Syrah Resources higher in 2017 are the startup of production at Balama, expected by the end of Q2, and the results of the Louisiana spherical graphite facility feasibility study, that could be completed by the end of Q4. If everything goes smoothly, Syrah Resources’ share price should record some notable gains in 2017.

Nevsun mining experienced some significant changes in 2016. Its Eritrean Bisha copper mine finished the first stage of its mine life and entered a new era, in which it will produce more zinc than copper. The copper producer turned into a zinc-copper producer just in time to reap the benefits of the fresh zinc bull market. Although the startup of the new processing plant has been more complicated than expected, due to the problems with separation of the copper concentrate, it is believed that the problems will be resolved during the coming months. 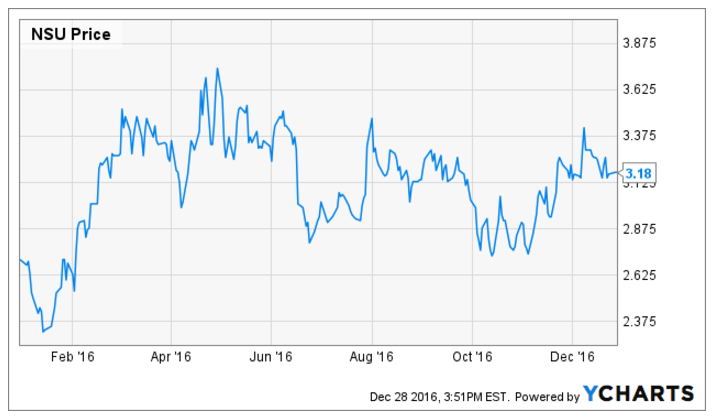 Nevsun’s share price increased only by 17% in 2016, but the company hides a lot of potential that should be unlocked in the coming years. In Q2 2016, Nevsun acquired Reservoir Minerals and its high-grade copper-gold Timok project located in Serbia. Timok consists of an Upper and a Lower zone. The Upper zone is 100% owned by Nevsun Resources and it contains inferred and indicated resources of 2.65 billion lb copper and 2.5 million toz gold and it is still open in several directions. The ore grades 3.4% copper and 2.1 g/t gold. Thanks to the high-grade nature of the deposit and great infrastructure in the area, the PEA outlined two very promising development scenarios with an initial capex of slightly more than $200 million and an after-tax NPV (8%) of slightly less than $1 billion.

The Lower zone is 60.4% owned by Nevsun Resources and 39.6% owned by Freeport-McMoRan (NYSE:FCX). It has lower grades compared to the Upper zone, but it is much larger and still open in several directions. The exploration has intersected some impressive intervals of mineralisation, including 1.05% of copper equivalent over 835.8 meters or 1.07% of copper equivalent over 705.8 meters.

Q1 2017 will be very important for Nevsun Resources. If the company is able to resolve the problem with the copper concentrate at the Bisha mine, the share price should start to climb back to the 2016 highs. And if the Timok PFS, expected in late 2017, is at least as positive as the PEA, we should see new multi-year highs. The exploration at the Timok Upper and Lower zone and at the significantly expanded Bisha land package is a wild card that can add some additional boost to the share price.

Nexgen Energy owns the Arrow deposit that is one of the largest and highest grade uranium deposits in the world. Its maiden resource estimate presented a respectable inferred resource of 201.9 million lb uranium at a cut-off grade of 0.25% (3.48 million tonnes grading 2.63% uranium) and 101.3 million lb uranium at a cut-off grade of 10% (221,200 tonnes grading 20.78% uranium). Thanks to the great initial resource estimate and further excellent drill results, the share price of Nexgen is up by more than 230% in 2016 and although the uranium price is still weak, there are a lot of reasons why to believe that Nexgen’s share price growth is poised to continue in 2017. 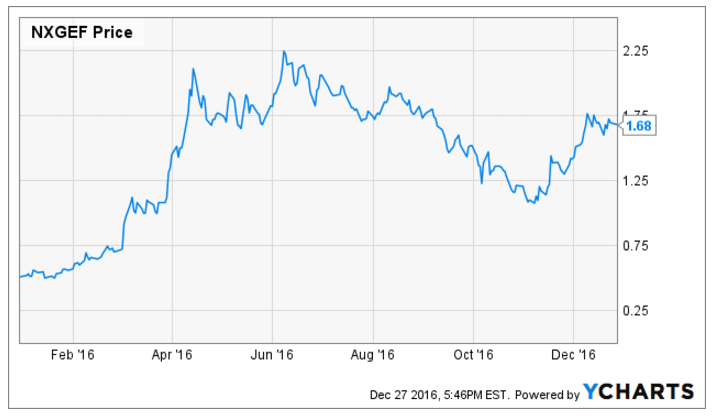 In H1 2017, an updated resource estimate based on more than 70,000 meters of new drill holes should be released. Given the excellent drill results, it is reasonable to expect that the Arrow deposit resources will grow significantly. Moreover, a big part of the inferred resource should be moved into a higher category. By the end of 2017, another update to the resource estimate and completion of the PFS are expected. The Arrow deposit starts only 100 meters below surface, and it’s basement-hosted, which means that the production costs should be lower compared to the typical Athabasca basin uranium deposits.

The upside potential is further boosted by the newly discovered Harpoon deposit that is located only 4.7 kilometers to the north-east of Arrow. More attention should be paid to Harpoon in the forthcoming winter drill campaign that should start by the end of January.

The resource estimate updates and the PFS will be the main catalysts in 2017. The share price can be supported also by drill results from the Harpoon area. Although the uranium price is still weak, there are many new nuclear reactors under construction in Asia and the uranium prices are expected to recover by the end of this decade. Nexgen Energy provides a great exposure not only to further exploration successes but also to growing uranium prices.

Ivanhoe Mines recorded an exceptional year, but the show isn’t over yet. Share price of the company that owns and actively develops three world-class assets grew by more than 300% in 2016 and there is still a lot of space to grow, as the development of the PGM Platreef mine in South Africa and the copper Kamoa-Kakula mine and zinc Kipushi mine in the Democratic Republic of Congo continues well. 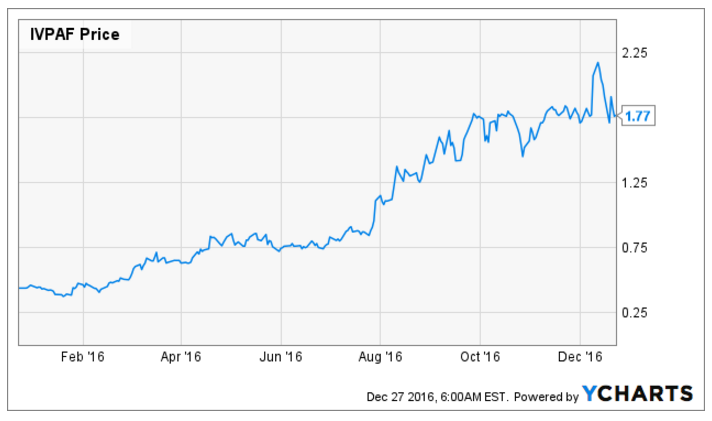 The 64%-owned Platreef project contains inferred and indicated resources of 41.83 million toz platinum, 42.72 million toz palladium, 2.79 million toz rhodium, 7.38 million toz gold, 3 billion lb copper and 5.88 billion lb nickel. Platreef is one of the biggest PGM deposits in the world and it is still open in several directions. The mine is under construction right now and it is projected to become the largest and one of the lowest cost PGM mines in the world by the end of next decade.

The 39.6%-owned Kamoa-Kakula project contains inferred and indicated resources of 73.5 million lb copper, at a 1% copper cut-off. Kamoa-Kakula is the largest copper discovery ever made in Africa and it ranks among the 10 largest copper deposits in the world. But the Kakula deposit is still open to northwest and to southeast, and there is no doubt that the resources will grow significantly. An updated resource estimate is expected in Q1 2017, as well as an updated PEA that should evaluate the development of a mining operation with a throughput rate of 16 million tonnes of ore per year. In this case, Kamoa-Kakula could become one of the three biggest copper mines in the world, with an annual production of more than 1.3 billion lb copper.

The 68%-owned Kipushi project contains measured, indicated and inferred resources of 9.357 billion lb zinc, 458.2 million lb copper, 259.8 million lb lead, 7.138 million toz silver, 1.31 million lb cobalt and 21.57 million toz germanium. The most exciting part of the deposit is the Big Zinc zone that contains extremely high-grade mineralisation grading 34.89% zinc, 0.65% copper, 0.96% lead, 19 g/t silver and 53 g/t germanium. A PFS is expected in Q2 2017. As the Kipushi mine is a brownfield project, it can be taken into production relatively quickly and cheaply. It is expected that the most important parts of the infrastructure should be fully operational by the end of 2017. Kipushi is expected to become one of the biggest and lowest cost zinc mines in the world.

Although Ivanhoe’s share price has experienced some weakness, due to the political instability in the Democratic Republic of Congo, lately, it is one of the most exciting plays in the mining space and further triple-digit gains wouldn’t surprise me at all in 2017. The share price growth should be fueled especially by the Kamoa-Kakula updated PEA and resource estimate, by further exploration successes and by the Kipushi PFS and restart efforts.