Team Dimension Data for Qhubeka was a real protagonist during the first stage of the Tour of Romandie today with our efforts rewarded by a fine 4th place finish for Natnael Berhane.

It was yet another wet and cold day of racing in Switzerland as the peloton took on the 173km stage from Aigle to Champery. The main challenge of the stage came in the form of 5 categorised climbs that were to be completed.

Mekseb Debesay took the challenge on from the gun, and our Eritrean made the early break of 7 riders. Once the climbing started though, 3 riders could not sustain the pace in the escape while Debesay showed he was arguably the strongest in the move.

The gap to the peloton grew steadily to 9-minutes before LottoNL-Jumbo started to put any real effort into the chase. When the race reached the final 40km, it looked for a moment like the Debesay break would make it but unfortunately the unfavorable wind would be to the detriment of the attackers.

Reaching the final 14km climb of the stage with a minute’s lead, Debesay attacked his counterparts on 3 occasions, but Sander Armee (Lotto-Soudal) could respond each time.

With 6.5km to go, Debesay and Armee were caught and the stage was wide open again as we climbed up to Champery. Merhawi Kudus and Natnael Berhane were both attentive at the front of the peloton as fresh attacks started.

With 3km to go Kudus responded to a dangerous move that contained the likes of Tejay Van Garderen (BMC), Ion Izagirre (Bahrain) and Primoz Roglic (LottoNL-Jumbo) by riding the across the gap with ease. It all came back together though as a peloton of 60 riders charged toward the line on a very wet road.

Berhane was our best positioned to take on the sprint as he drifted between the wheels of Ulissi and Albasini. Albasini led the sprint from a fair way out which proved to be the best tactic on the slippery and technical run to the line. Berhane crossed the line 4th, a strong result by our Eritrean climber.

“First of all, I want to say thank you to the whole team. Everyone was really good today and the guys helped me and Merhawi a lot. I am really happy to have finished fourth but I think I started my sprint a little bit too late today. The positive news is we are riding well and there are more stages coming up where we can get a good result.”

“It was another typical day in the mountains of Romandie. It was a better day than expected when we were in the valley so that was good. Mekseb made it into the breakaway and they got a big gap, almost 9-minutes. Just when we thought they might make it, LottoNL and Cannondale started to chase over the last 60km. There was a really strong head wind and this made the gap decrease really quickly. For the final we wanted Daniel, Natnael and Merhawi to be part of the front group as we knew the climb was not that hard and it would be a bigger group at the finish. Then they were free to try something and Natnael took his chance and delivered with a 4th place which we are satisfied with.” 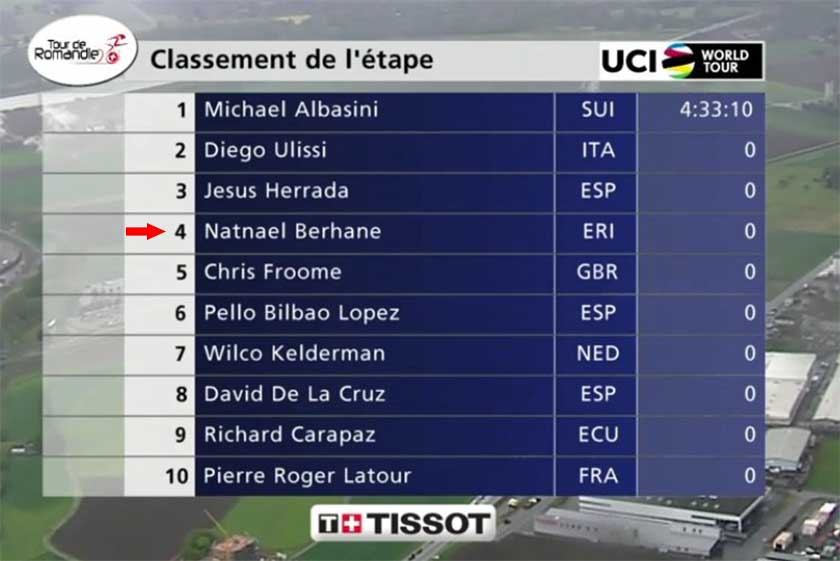