The strengthening of partnerships to sustain development gains in Eritrea was the focus of a mission led by the UN Assistant Secretary-General and Deputy Executive Director (Programme), Dereje Wordofa and sister UN agencies.

The high-level UN delegation met with senior officials of the Eritrean Government during a visit to the country on 18 and 19 October.

Discussions were held with the Ministers of National Development, Health, and Foreign Affairs on ways to strengthen UNFPA’s partnership with the Eritrean Government in the framework of the UN Strategic Partnership and Cooperation Framework (SPCF), and addressing bottlenecks.

Mr. Dereje said the development gains Eritrea has made on many social indicators in recent decades was impressive, and a good example to the rest of the world.

“We are satisfied with [Eritrea Government’s] cooperation with the UN,” said Dr. Gergish Teklemichael, the Minister of National Development.

On the 15-year time frame given for attaining the targets set for the Sustainable Development Goals (SDGs), he said that his country would not have to wait long to attain these goals, provided that the much-needed support of the international community, including the UN, is boosted.

In a meeting with the UN Resident Coordinator a.i. and the heads of five UN agencies, Mr. Wordofa was briefed on how the agencies are working together in the framework of the SPCF in coordinating UN support to the development efforts of the Government. The One UN initiative remains strong in Eritrea and earnest efforts have been made to integrate emergency and development programmes.

Mr. Dereje said that the UN Country Team has exerted much effort in Eritrea to work coherently and that the SPCF is the single most important planning and coordination tool.

The One UN initiative is all the more relevant today in view of the UN Reform underway, in the effort to realize the goals of the 2030 Agenda on Sustainable Development in the remaining 12 years, he added.

He called on development partners based in Eritrea (drawn from Britain, Sweden and the European Union) to channel resources to support the development work in the country.

Mr. Dereje, the Minister of Health, Amina Nur Hussien, and a UNFPA leadership team visited health facilities to see the impressive gains made by the country in improving maternal and neonatal health.

The maternal and neonatal health interventions supported by UNFPA at the Mendeferal Zonal Referral Hospital, including the medical treatment and rehabilitation of fistula survivors, were a highlight. The hospital is the national referral hospital for fistula in Eritrea and the rate of the incidence of obstetric fistula has declined remarkably. As part of the rehabilitation work, fistula survivors receive psycho-social counselling, vocational training, and literacy classes at the hospital.

The group also toured the Maternity Waiting Home at the Adi Quala Community Hospital, which is supported by UNFPA.

Mr. Dereje acknowledged the tremendous achievements made in maternal and neonatal health.

“This country has a lot to tell the rest of the world on achieving the transformative results UNFPA is pursuing – ending preventable maternal death, ending unmet need for family planning, and ending gender-based violence and harmful cultural practices against women and girls.”

UNFPA is to step up its support to help the country achieve its development targets, he said.

Minister of Health, Amina Nur Hussien said her Ministry would continue working with partners such as UNFPA “to ensure universal health coverage and achieve the targets of the SDGs.” The cooperation with partners has made pivotal contributions to the achievements the country has made, she added. 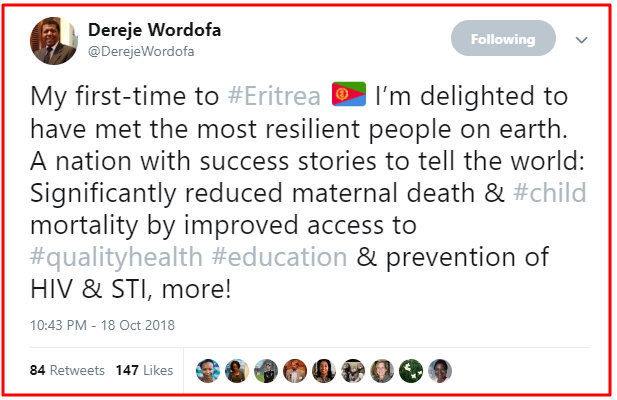 The current peace agreement between Eritrea and Ethiopia bodes well for the two countries and the sub-region as a whole in channeling resources to development for the betterment of the lives of the people, Mr. Dereje said.

The UN is committed to supporting Eritrea to sustain its impressive development gains in recent decades.

He also highlighted the critical importance of generating quality and accurate data for development planning, and stated that UNFPA is ready to support the country to undertake a Census and Demographic and Health Survey.

He underscored the need for the efficient and timely use of resources tackling impediments on programme implementation, which he said is imperative to mobilize additional resources to support the country’s development efforts.