The UN Office on Drug and Crime(UNODC) Regional Office for Eastern Africa (ROEA), together with the Government of Eritrea, recently presented the first training for 30 law enforcement officials in Eritrea on Countering Trafficking in Persons and Smuggling of Migrants.

The 5-day training workshop was organized within the framework of the UNODC Regional Programme for Eastern Africa (2016-2021) and its sub-programme on Countering Transnational Organized Crime and Illicit Trafficking, including activities on “Strengthening the Human and Institutional Capacity of the Government of Eritrea to Fight against Human Trafficking and Smuggling of Migrants” funded by the United Kingdom, and the Better Migration Management (BMM) Programme funded by the European Union and GIZ.

The objective of the workshop, which was presented from 4-8 June 2018 in Asmara, was to enhance the knowledge of law enforcement officials to identify, investigate and counter Trafficking in Persons and Smuggling of Migrants, whilst simultaneously ensuring a victim-centered approach and due consideration for the rights of migrants. 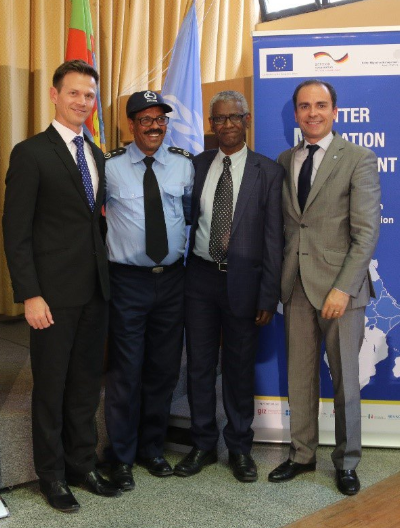 The curriculum also included hands-on exercises and case studies on criminal investigations and knowledge sharing, illustrating the complexity of investigations and prosecutions, while ensuring a victim-centered approach, including assistance and support to potential victims and vulnerable migrants.

During the opening remarks, Colonel Mahary thanked the UNODC for hosting the first training workshop and for supporting the Government of Eritrea in strengthening its capacity to Counter Trafficking in Persons and Smuggling of Migrants.

He also noted that it was a special opportunity for the participants for they were the first group to benefit from the training which would greatly assist them in their day-to-day duties. In turn,

Dr. De Andrés thanked the Government of Eritrea and the Eritrean Police for inviting UNODC to assist the Government in strengthening its criminal justice system. He reiterated that Trafficking in Persons and Smuggling of Migrants continued to pose serious threats to the people and governments of Eastern Africa and beyond and, as such, effective and coordinated criminal justice responses to these complex crimes were crucial.

Mr. Johan Kruger thanked the Government of Eritrea and emphasized that there was no region that has been affected by Trafficking in Persons or Smuggling of Migrants. Hence, he asserted, effective regional and international cooperation, supported by knowledge and capacity within law enforcement agencies, had to be a key priority in countering transnational organized crime.

Finally, Mr. Ibrahim welcomed UNODC and expressed commitment by the Ministry of Foreign Affairs to work closely with UNODC in countering all forms of Trafficking in Persons and Smuggling of Migrants.

In closing, His Excellency, Ian Richards, Ambassador of the United Kingdom to Eritrea, and Nelson Jorge, Head of Cooperation for the Delegation of the European Union in Asmara, joined Colonel Tsegai, Head of the Eritrean Police, during the closing ceremony.

They expressed their gratitude towards the Eritrean Police, participants, and UNODC for completing the first training of this kind in Eritrea.

Miss. Asmeret Tesfai, UNODC Project Coordinator for Eritrea, thanked the Government of Eritrea and the Eritrean Police on behalf of UNODC for working with UNODC. She also expressed UNODC’s gratitude towards the British Government, as well as the European Union and GIZ through the BMM Programme, for their financial support and commitment to working with UNODC.

UNODC will be implementing a variety of capacity building activities in Eritrea, funded by the British Government and the European Union and GIZ through the BMM programme, aimed at strengthening a human rights-based criminal justice response to countering transnational organized crime, including Trafficking in Persons and Smuggling of Migrants.