Views and Musings about the BBC

Last week, it was revealed that Eritrea’s Ministry of Foreign Affairs would be summoning the British Ambassador. Although this development was precipitated by the recent highly provocative and questionable comments made by a BBC Tigrinya Language Service program ‘journalist’ in regard to Eritrea, the country’s Ministry of Information noted that the problem was, in fact, much deeper and extended beyond the latest remarks. The recent series of events raises many interesting points of discussion. Here, I will briefly touch upon a few.

First, as was alluded to by a series of tweets made by Eritrea’s Minister of Information last week, the problem is much larger and deeper than a few recent ill-advised comments. The fundamental issue is that for years, much of the mainstream and Western media (including the BBC) have chronically misrepresented Eritrea (as well as many other countries in Africa and the Global South), either distorting or demeaning its narratives, or omitting them entirely.

Quite often, biased reports and stories, over-report, sensationalize, or exaggerate “negative” aspects about Eritrea and underreport challenges, ignore context, and downplay, dismiss, or overlook “positive” developments in the country.

The coverage about Eritrea has often reinforced misguided and outdated views and perspectives that Eritrea is a savage, backward country, full of problems and in need of a Western savior. For many consumers, the media’s long history of poor coverage has undermined much of its credibility, legitimacy, and authority.

Although only recently added to the BBC portfolio – it was launched in late 2017 – the BBC Tigrinya Language Service program has also been plagued by significant issues and problems. The program’s launch was part of a larger expansion initiative taken at the BBC (a total of 12 new language programs were added, with 6 in Africa) and it was generally described as a way to help inform the people of Eritrea, Ethiopia, and the region.

“in a world of anxieties about fake news, where media freedom is being curtailed rather than expanded, the role of an independent, impartial news provider is more important than ever.”

Of course, it is difficult to overlook the fact that the £289 million expansion was financed by the British government, reportedly to advance “UK soft power and foreign policy”, thus making the BBC a medium of foreign policy, and that the launch was a part of renewed efforts to promote the UK’s political, commercial, and other interests around the world.

In terms of the BBC Tigrigna Language Service program, it quickly became clearly apparent that the main purpose of the launch was, in fact, to undermine Eritrea and provide protection and support to the TPLF-led regime in Ethiopia, which was confronted with mass protests and dissent across the country.

Almost from the moment of its much-heralded launch, the BBC Tigrinya Language Service program has been characterized by poor coverage of Eritrea and the general surrounding region. Reports on key issues have often been heavily biased and are regularly full of basic, factual errors. 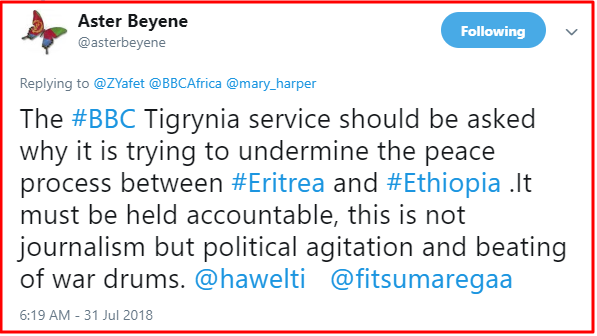 Additionally, over the past several months, as peace and cooperation have finally begun to emerge in the long-troubled Horn of Africa region, the program’s journalists and analysts have regularly made incendiary and provocative remarks, pushed conspiracy theories, and often helped to perpetuate hate, violence, or discriminatory intolerance.

Unfortunately, however, over the years the BBC’s response to its audience’s persistent criticisms, concerns, and calls for better coverage has been lackluster and woefully inadequate.

While the BBC describes itself as providing impartial, independent, and international information, news, and analysis, its practices and coverage continue to raise significant doubts about the accuracy of that description. In many ways, its practices and coverage are actually directly contradictory to and completely divorced from the principles and values that it professes to champion and uphold. 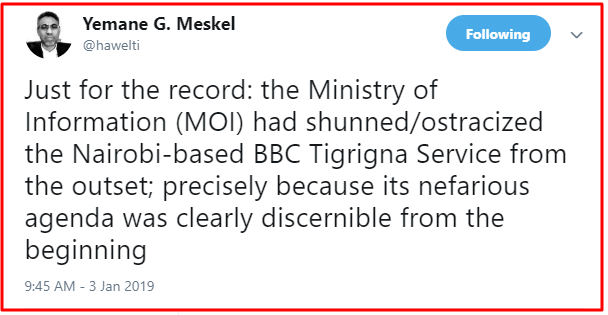 Moreover, it is also reasonable to ask why the BBC does not clearly denounce and disavow – or at least significantly distance itself from – the incendiary and dangerous comments that have been expressed by its journalist. Is this “high quality, accurate, impartial news coverage,” which is one the 5 “public purposes” of the BBC, as set out by the Royal Charter and Agreement that is the constitutional basis for its existence?

Although I firmly agree with Woodrow Wilson’s idea, famously expressed during his address at the Institute of France in Paris in 1919, that, “if a man is a fool, the best thing to do is to encourage him to advertise the fact by speaking,” it is also extremely important that harmful, inflammatory, hateful rhetoric be unequivocally and emphatically denounced and rejected.

As noted, the Horn of Africa is only now taking the first steps in emerging from a long, dark period that was characterized by terrible violence, intolerance, and tension. At this stage, we all have a great responsibility to do our utmost to work for peace and support cooperation and reconciliation. Surely, the BBC should not be emboldening and enabling the forces of hate and division at this critical juncture and a promising moment for the Horn of Africa. It would also serve us well to keep in mind the fact that there are numerous recent cases, such as in Rwanda, Kenya, and South Africa, to name only a few examples just from the continent of Africa, illustrating how the media, news outlets, and various platforms can be used to fan the flames, promote hatred, amplify tension, and incite significant conflict and violence.

Another interesting point raised by the recent developments has to do with double standards. Specifically, months ago, when peace and cooperation between Eritrea and Ethiopia were first beginning to unfold, some Western journalists and analysts chided Eritreans and Ethiopians that were expressing negative sentiments towards the TPLF. Without condoning any of those sentiments, it is imperative to recall that many of those individuals had directly suffered abuses and injustices perpetrated by the TPLF. When those Western journalists and analysts presented their criticisms, they packaged them as a part of alleged concerns about the potential for renewed violence and the possibility of reconciliation between Eritrea and Ethiopia (and the latter’s various ethnic-based states). However, the question is where are those commentators now? Why are they not now denouncing the highly troubling and dangerous comments that have regularly been expressed by public figures?

While the early January period is traditionally one where individuals and organizations around the world commit to doing things differently and resolve to make changes, the BBC, unfortunately, seems to be persisting with its poor old habits.

(NB: Generally, views are understood as a particular way of considering or regarding something, while musings basically refer to pondering and contemplating or a period of deep reflection and thought. Accordingly, “Views and Musings” is all about sharing various thoughts or comments on recent events or topics related to Eritrea, the surrounding region, and the world.)