NEVSUN Resources (TSE:NSU) stock jumped as much as 4.4% out of the gate on Friday after releasing third quarter results that beat expectations thanks to strong cash flows and high grade throughput at its Bisha mine in Eritrea.

By early afternoon the Vancouver-based company had given up some of the gains to change hands at $3.77, still up 3% on the Toronto Exchange in higher than usual volumes.

The volatile counter is down from a high of $4.62 last month, but unlike many of its peers is showing gains year to date, adding 7% in 2014 for a market value of just over $750 million on the big board. Paying a peer-leading dividend and embarking on a share buyback program also helped the counter outperform the sector this year.

Nevsun Resources, a pioneer in the East African country which shows great potential for developing recently discovered volcanogenic massive sulphide (VMS) deposits, after the bell on Thursday announced a 19% jump copper production to 56.4 million pounds, boosting cash from operations to $84 million thanks to high copper grades and some of the lowest costs in the industry.

Nevsun, which transitioned 60%-owned Bisha from a gold-silver producer to a primary supergene copper producer last year, achieved costs per pound of copper of $1.07 versus a ruling price of over $3.00 a pound. Copper head grades during the quarter came in at a spectacular 6.3% and finished inventory at Bisha has grown to 15m pounds. Full year copper output of 180m to 200m is targeted and the company also plans to expand zinc production from 2016. 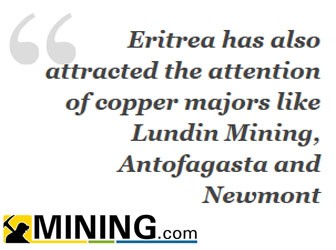 The company said its successful drilling results “confirms a VMS district in and around Bisha” which has also attracted the attention of copper majors like Lundin Mining, Antofagasta and Newmont.

Bisha’s bankable feasiblity study was released in 2006 and went into commercial production in February 2011. The mine was built under budget at an estimated capital cost of around $260 million, which by today’s copper capex standards seems like small beer.

Perhaps the number one reason punters have flocked to Nevsun while shunning swathes of the sector is its balance sheet. With strong cash flows, $380 million already on hand, no debt and a stated asset acquisition program “corporate activity” is definitely on the cards.